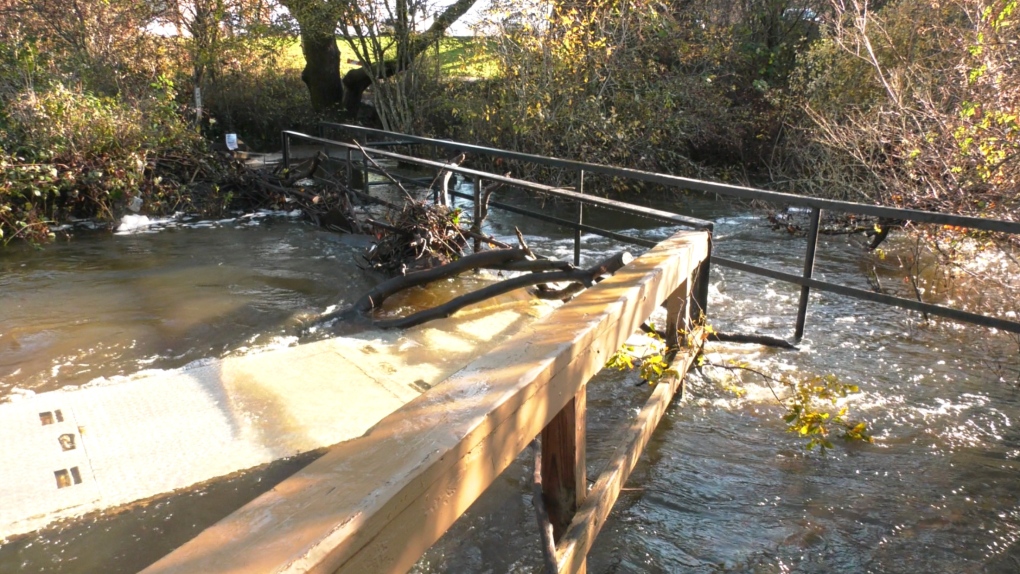 There are some major concerns about Vancouver Island's urban rivers and creeks after heavy rains caused them to overflow their banks.

“My marine biologist people feel that this has really done a lot of damage to our salmon run this year,” said Dorothy Chamber, of the Salmon in the City Project.

On Tuesday, the Colquitz River was five feet higher than it currently is.

Raging waters pushed logs and other debris down the river.

“Which then takes out the reds, which is the gravel nest where the salmon eggs are,” said Chambers.

This year has been a challenging one for coho salmon in the Colquitz.

Summer drought nearly dried up the river. Then otters got into fish counting pens and ate a good number of returning salmon. Now, it’s too much water, all at once, that has possibly wiped out any progress the salmon did manage to make.

It’s not all bad news though. The damage could have been worse, according to Eva Riccius, Senior Manager of Saanich Parks.

Last September, Saanich completed work on the river, creating side pools in increase salmon habitat. Those pools overflowed during the heavy rains, but that also took pressure off of the river, slowing it down and preventing further damage.

“This has stood up amazingly,” said Riccius. “I mean, the water was very high, but still, I think without it we would have fared worse.”

Over on Millstream Creek in Langford, waters are still raging and the concerns are the same.

“At this point in time, the coho eggs that would be in here would be very fragile,” said Ian Bruce, executive co-ordinator of the Peninsula Streams Society.

“Any sort of shock to them, it’s going to kill them.”

Bruce estimates the waters in narrow parts of the creek rose by three meters.

He fears this year's coho return could be in jeopardy, but says we won’t know how bad it truly is until the spring. That’s when fry begin to hatch.

“So we’ll know how many of these eggs survived because we’ll know by the number of fry that we see,” said Bruce.

He says B.C. is seeing more major storm events, and it’s only expected to get worse.

He wants to see municipalities planning developments better along the banks of urban waterways. This would allow for floodplains, so that rivers can safely spill their banks and not be forced to push all that extra water down-stream.

“Don’t build so close to the creeks,” said Bruce. “Use those areas for playing fields and parkland that can be flooded during storm events without property damage or without confining the water to a channel.”

The federal Department of Fisheries and Oceans (DFO) says it is closely monitoring the situation. Once the storm waters recede, DFO will work with its local partners to help asses the long-term impact the floods had on Pacific salmon.