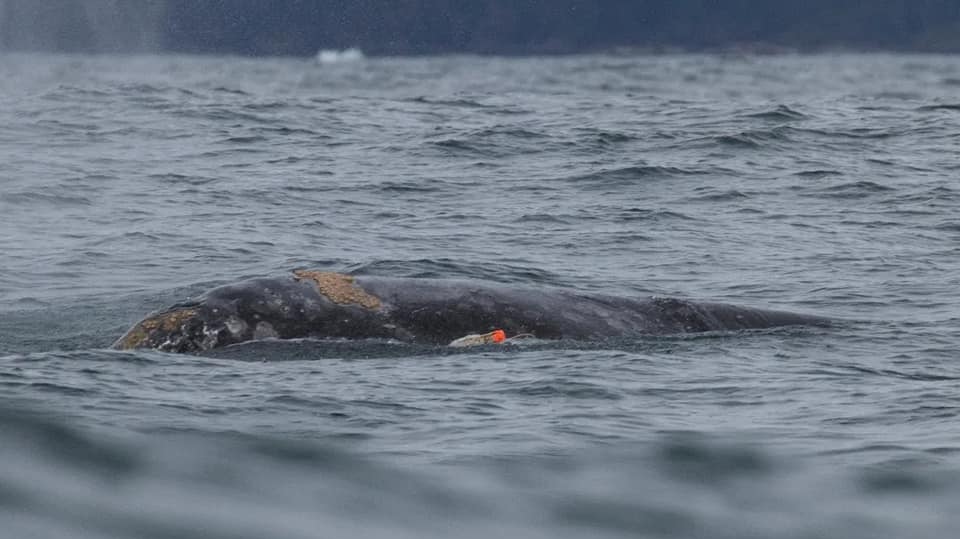 Fisheries and Oceans Canada was alerted to the issue Thursday afternoon after a group of whale-watching operators spotted and photographed the distressed mammal. (photo by Mark Sawyer, shared by Whales of Clayoquot & Barkley/Facebook)

The survival of a migrating grey whale spotted off Tofino, B.C., on Thursday hangs in the balance after photos showed fishing gear wrapped around the mammal's body.

Fisheries and Oceans Canada was alerted to the issue Thursday afternoon after a group of whale-watching operators spotted and photographed the distressed mammal.

"The problem with towing gear is that it’s likely going to pick up more gear. That’s the issue,” said Paul Cottrell with the federal marine mammal response team.

Fisheries officers are already searching for the whale and on Friday morning a specialized team trained in disentanglement were mobilizing on the mainland to travel to Tofino.

Cottrell, who leads the team, says he is especially worried because it appears the fishing gear is wrapped around the whale's mouth.

He says it could impact the animal's ability to forage and eat, which is critical as the ocean giant migrates north towards Alaskan waters.

Cottrell says it’s unclear what type of fishing gear is hampering the whale's movements, but admits coastal waters are full of errant equipment.

The search is the second of its kind in the past two weeks for the disentanglement team.

Last week, they rushed to the waters off Prince Rupert, B.C., for a report of an entangled grey whale.

It has not been spotted again.