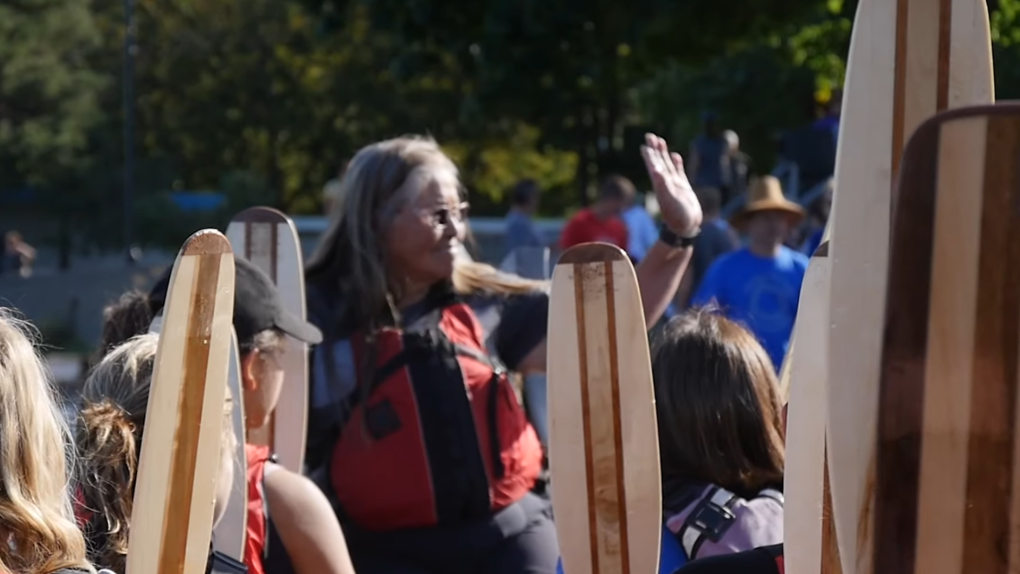 The Nanaimo Aboriginal Centre and the Mid Island Métis Nation have launched a fundraiser in hopes of creating B.C.'s first urban Indigenous school in Nanaimo. A still from a video on their fundraising page is shown.

In a release, NAC says the Nisaika Kum’tuks Learning Centre and Tsawalk Learning Centre were created to meet the urgent needs of “highly vulnerable and hard-to-engage” Indigenous students living on the Mid Island.

The centre fears that – after it spent seven years building trust with the community – the consolidation will negatively affect students who’ve struggled in the past. Those students may have a hard time transitioning to a larger educational system because of a lack of Indigenous-centred support, according to the centre.

In response, NAC and the Mid Island Métis Nation are applying for an independent school license and a GoFundMe fundraiser is trying to raise $1 million to develop the school.

“The United Nations Declaration on the Rights of Indigenous Peoples articulates that Indigenous peoples have the right to establish and control their educational systems,” says Joy Bremner, president of MIMN. “An independent school would also be a step towards fulfilling some of the calls to action outlined by the Truth and Reconciliation Commission in regards to the education of Indigenous children with the full participation and informed consent of Indigenous peoples.”

Ian Kalina, the interim executive director of NAC, says Nisaika Kum’tuks Learning Centre and Tsawalk Learning Centre have been helping support students and families who have fallen through the cracks in the traditional education system.

“The goal of this new institution is to build a community-supported environment where learners never even begin to see the cracks in the system, let alone fall through them,” says Kalina.

The school would offer K-12 programming and hopes to open in 2022.

According to the GoFundMe page, the money raised will pay for scholarships, secure a school site, support healing activities and traditional teachings, connect with elders and provide legal support – among other investments.

Their curriculum combines traditional teachings, culture and academics, along with work experience and trades training.

While Tsawalk serves both Indigenous and non-Indigenous people, NAC says, most students are Indigenous and come from single-family homes struggling with poverty and intergenerational trauma as a result of residential schools.

The NAC says a provincial directive has forced the consolidation of the two schools into the Nanaimo-Ladysmith school district (SD 68) from the Vancouver Island West school district (SD 84). Asked about the fundraising efforts on Friday, B.C.'s Ministry of Education said in a statement that it did not direct the consolidation and that it is "committed to supporting Indigenous education in B.C."

"The ministry did not direct the consolidation of these programs into SD 68," the ministry said. "The learning centres had been operated by SD 84 within SD 68 boundaries since 2014 and it was determined that the Nanaimo-Ladysmith School District would be better suited to operate programs that enroll their student population."

The ministry said it appointed a special advisor to work with the districts, which reached an agreement on the transfer of the programs.

"In May 2020, SD 84 and SD 68 signed a Memorandum of Understanding confirming the responsibility of these programs would transfer from SD 84 to SD 68 effective June 30, 2021, and that community partners, staff, parents and students would be fully consulted on any changes to future programming."

Asked for its perspective on the issue, the Nanaimo-Ladysmith school district provided the following statement:

“Pursuant to the ministerial order, Nanaimo Ladysmith Public Schools (NLPS) and SD 84 are working collaboratively with partner groups, including Nanaimo Aboriginal Centre (NAC) and Mid Island Metis Nation (MIMN), to transition the SD 84 programs, located in Nanaimo, to NLPS. We are aware that NAC and MIMN have applied for Independent School status and are in full support of that application.”