From urinal mats to unicorns, cargo from 2021 spill still washes up on B.C. shores

From urinal mats to unicorns, cargo from 2021 spill still washes up on B.C. shores

More than a year later, consumer goods from some of the ship's 109 lost containers still wash up on British Columbia shores, the inflatable toys now torn to pieces by the elements to be picked up alongside vacuum cleaner parts, bike helmets, coolers and urinal mats. 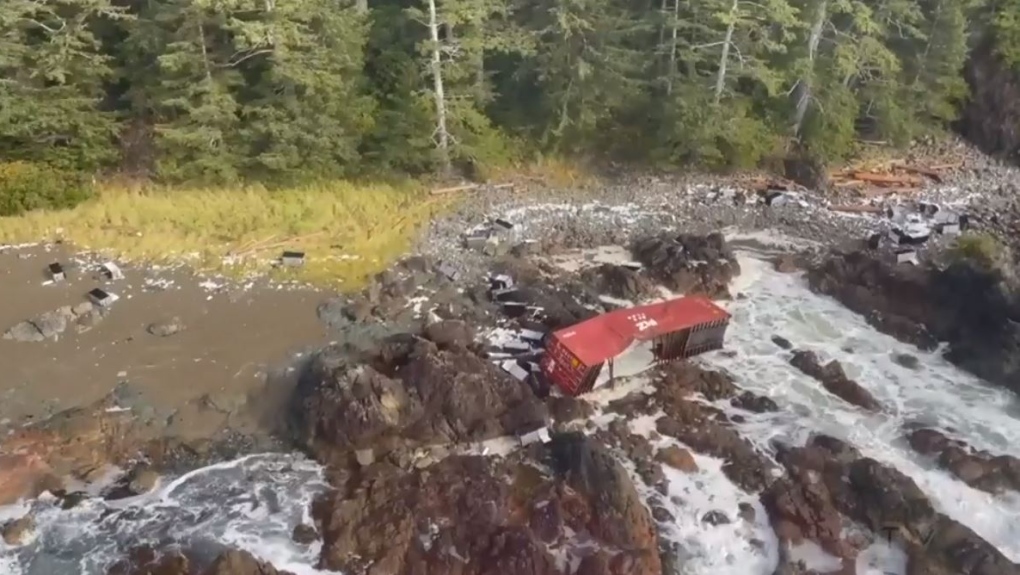 A shipping container that fell off the Zim Kingston is pictured on Vancouver Island: (Canadian Coast Guard)

“Gray urinal mats, they haunt our dreams. We found thousands of them on our initial cleanup and we're like, 'we hope we never see these again',” Laviolette said.

“We're still finding them. They're gonna be the bane of our existence for many, many years to come.”

Even as the debris continues to wash ashore, people involved in the massive cleanup fear a repeat of the disaster, with Canada ill-prepared to deal with such large-scale cargo spills. They hope a recent parliamentary committee report into the incident will spur change, but solutions aren't yet in place.

The Greek-owned ship was hit by high seas on Oct. 21 last year, sending dozens of containers packed with cargo from Asia tumbling overboard into Juan de Fuca Strait off the southern tip of Vancouver Island.

It became a multi-faceted environmental disaster when a toxic fire erupted on the ship, taking several days to extinguish.

Laviolette, co-founder of the environmental group Epic Exeo, was among the early volunteers to hit the beaches as an array of flotsam began to wash up.

She said the magnitude of what she saw in the early days of the cleanup “shook me to my core.”

“It was horrific. Just seeing fridges on the beach, and Styrofoam broken apart absolutely everywhere, and plastic everywhere,” she said.

Only four of the containers that went overboard have been recovered. 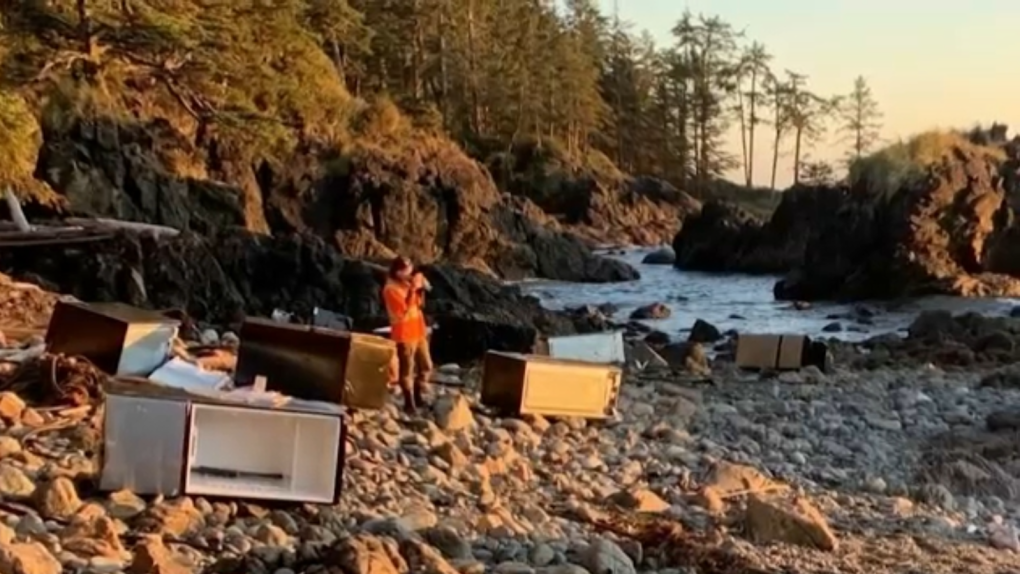 The Canadian Coast Guard says shoreline cleanup has begun in the Cape Scott area, with crews hired by the MV Zim Kingston’s owners collecting dozens of bags of Styrofoam and moving 40 refrigerators inland, beyond the reach of ocean waves.

A recent House of Commons standing committee report on the incident warns of ongoing risks.

It made 29 recommendations for improvements.

Alys Hoyland, with the Surfrider Foundation's Pacific Rim chapter in Tofino, said similar spills, including the loss of 35 containers from the Hanjin Seattle freighter in 2016, led to no significant policy changes.

“(After the Kingston spill), we were pretty much in exactly the same position as we had been in after the Hanjin spill,” she said.

“There's no formalized mechanism for responding to that in a timely and efficient way and because of that, the spill was worse than it potentially could have been if we did have these mechanisms in place to respond rapidly and efficiently.” 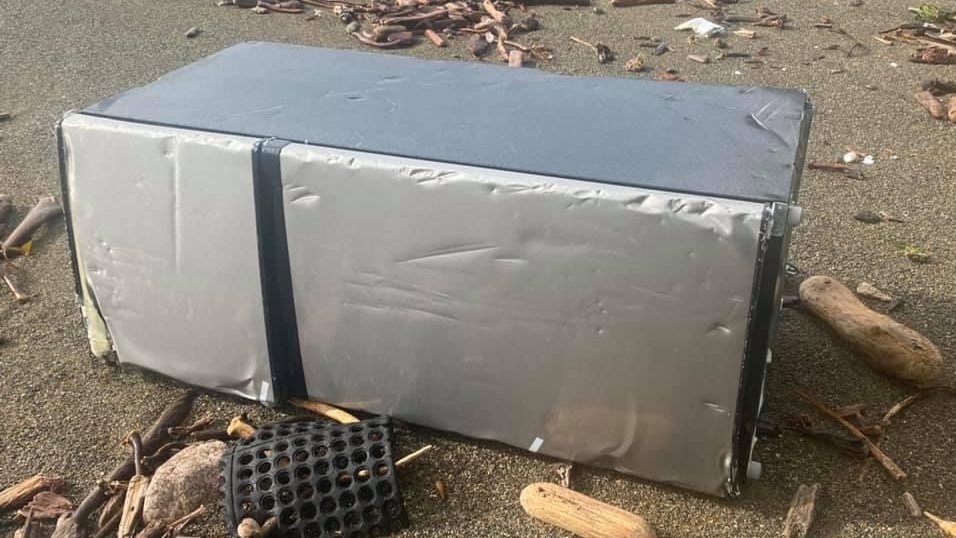 A refrigerator believed to have washed ashore from the Zim Kingston cargo ship on northern Vancouver Island. (Jerika McArter)

The standing committee report includes recommendations related to tracking and monitoring of containers, planning for spills and for Canada to push for similar improvements internationally.

Hoyland said the political response to the Zim Kingston spill has been better than for previous spills, with the federal government now listening to those who were involved, while it considers policy changes.

“Obviously, the next step is ensuring that those recommendations are actually implemented,” she said.

Minister of Fisheries, Oceans and the Canadian Coast Guard Joyce Murray did not respond to requests for an interview.

In a statement, her ministry said it was working with Transport Canada and other partners to prepare a response to the committee's report. 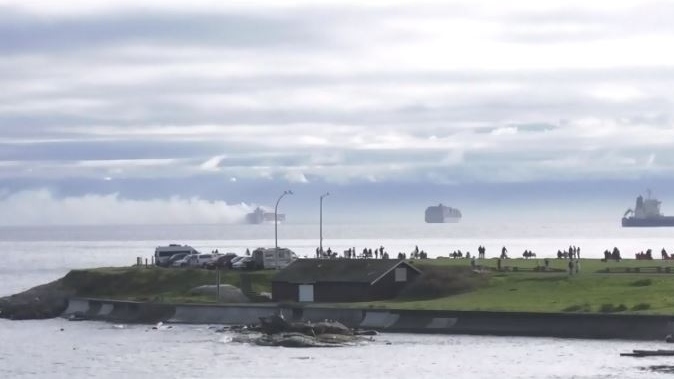 The coast guard responds to the fire aboard the Zim Kingston off Victoria. (CTV News)

Clean up from container spills can go on for decades. Millions of Lego pieces lost off the United Kingdom in 1997 are still being found on shore.

Hoyland, who spoke at the committee's hearings,said in addition to working to reduce the amount of plastic that ends up in the water overall, Canada needs better knowledge about how factors like coastlines, weather and currents create catchment areas for debris.

“Understanding the problem in order to address it upstream is fundamentally what we need here,” she said.

She also advocated for increasing training and resources in coastal communities, including for First Nations, to respond quickly to container spills.

“What we were seeing was a lot of stuff hit the beach but then it stayed there for a week (or) 10 days before anybody was asked to clean it up. Which meant that at every high tide, these items were being pulled back out into the ocean, where they were recirculating and drifting over a broader geographic area,” she said.

It would recruit, train and equip teams to respond to spills, create specific geographic plans and “develop the human and social capital infrastructure required to respond to cargo container spills in a timely manner.” 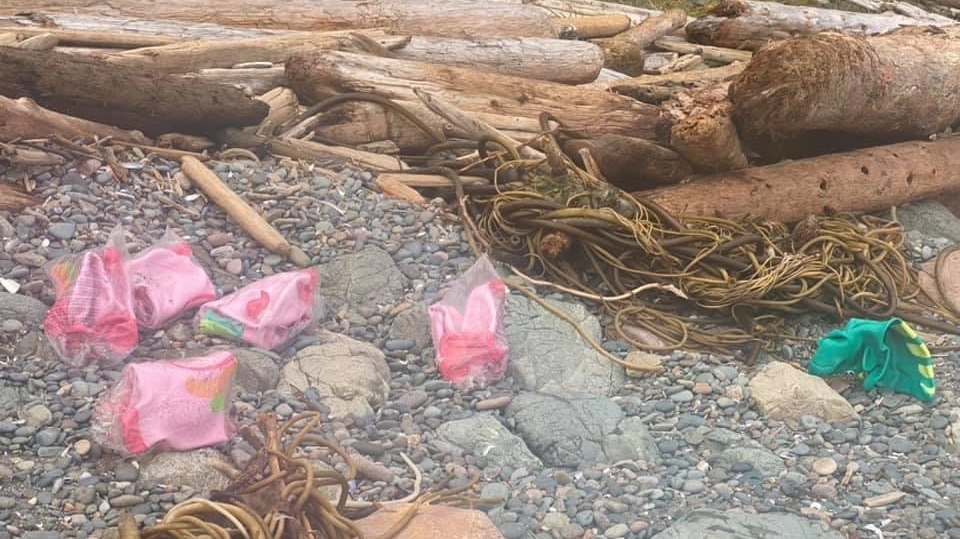 Hoyland said there also needs to be more transparency when a spill takes place. Shipping companies, including Zim Kingston's owners, are not required to publicly release complete details of what they were carrying when there is a spill.

Though some details are given to various enforcement agencies, Hoyland said having a public list of exactly what's on board would make it easier to demonstrate the extent of the pollution and prove where debris came from.

The committee recommended Canada work with the International Maritime Organization to require ships' manifests to more accurately identify cargo and require the details to be made available to port authorities and any joint spill response task force.

The Chamber of Shipping, which represents the interests of international ship owners and Canadian exporters and importers, told the committee that it was planning to launch a pilot project with Transport Canada and five B.C. Coastal First Nations aimed at sharing manifest information in a timely manner.

Under Canadian law, it is the responsibility of a ship's owner to cover the cost of cleanup, but the same law puts either a three- or a six-year statutory limit in place depending on whether the contents are considered hazardous.

It recommends the federal government examine alternative polluter-pays or industry-pays models that would ensure enough money is available to deal with damage caused by spills. 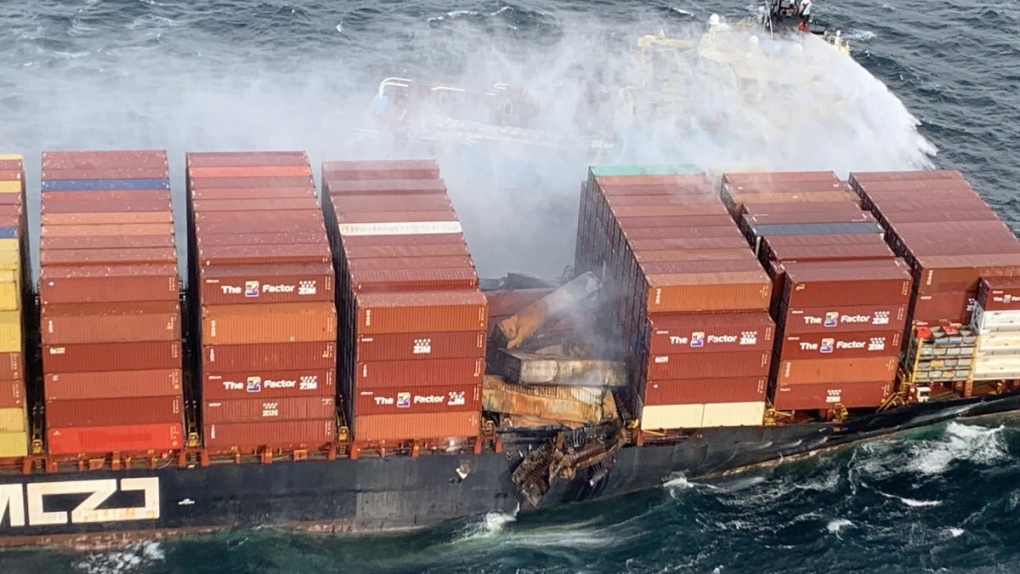 The flames initially spread to 10 containers after another 40 fell overboard in choppy waters on Friday. The fire on the MV Zim Kingston was mostly under control by Sunday afternoon. (Canadian Coast Guard)

The committee heard proposals including that Canada establish a levy per container shipped through Canadian ports so there would be money available to communities affected by spills.

Industry representatives pushed back against that idea, suggesting additional fees would be detrimental to Canada's competitiveness and undermine current international conventions.

The Ministry of Fisheries, Oceans and the Canadian Coast Guard confirmed in a statement that the Zim Kingston's owner contracted a sonar scan survey covering approximately one square kilometre of the ocean floor near where the spill happened to try to find some of the missing containers.

“The Canadian Coast Guard continues to ensure the ship's owner is fulfilling its responsibilities, which may include additional requirements to conduct expanded underwater surveys,” the statement says.

When the Zim Kingston spill happened, much of the early public attention was focused on two missing containers that carried the hazardous chemicals potassium amyl xanthate and thiourea dioxide. Those containers have not been located. 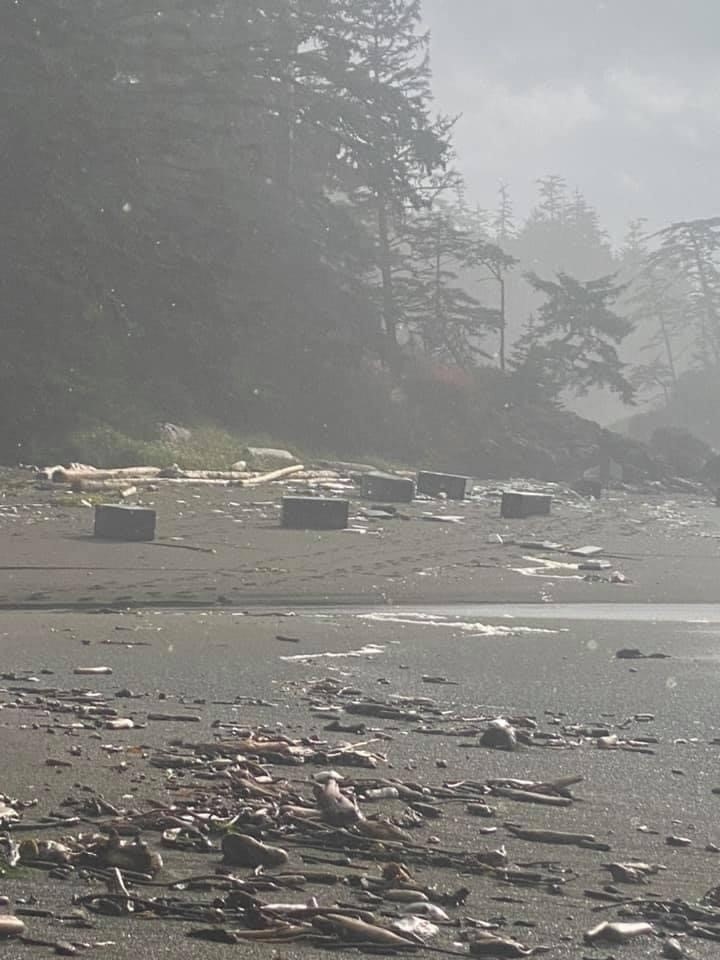 Both Hoyland and Laviolette say the amount of plastic that went into the water can be hazardous in its own way, polluting the environment and the food chain or injuring animals before eventually making landfall.

“We see more animals that are suffering because their stomachs are full of plastic,” Laviolette said.

Laviolette said the report's recommendations include items that advocates have been seeking for years. She said she's hopefully they'll lead to change but worries they could still be ignored.

“We now know the findings, it's now time for action. The longer that we sit, the more sick that our oceans are going to get,” she said.

This report by The Canadian Press was first published Dec. 8, 2022.

The Mindbender roller coaster at Galaxyland has been shut down, West Edmonton Mall announced on Monday. The redevelopment of the area is already underway, and the roller coaster is being decommissioned and removed.