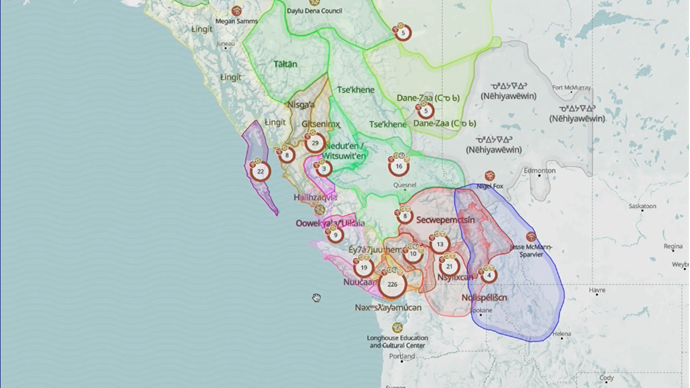 A screenshot of the FPCC First Peoples’ Map is shown.

VICTORIA -- The First Peoples’ map is the first interactive online map in Canada that provides information about Indigenous languages, arts and culture in B.C.

The First Peoples’ Cultural Council (FPCC) developed the map in response to B.C. First Nations requests for a platform to share information about their cultural heritage, languages and communities. The interactive map includes content that supports Indigenous linguistic, artistic and cultural revitalization.

“This is the first map of its kind in Canada to really weave together all the rich diversity of the cultures through layers of language, arts and cultural heritage,” said First Peoples’ Cultural Council communications officer Hannah Mashon.

“The layers on the map work independently, but they speak to each other as much as they do in real life with an Indigenous perspective,” she said.

The language layer of the map can be navigated by visitors so they can learn how to pronounce greetings, place names and communities in 34 First Nations languages with more than 90 dialects.

“The Arts layer allows you to explore artists in different regions and look through their portfolios and learn more about them,” said Mashon. “You can also search for public art and events to learn about what is going on in the regions around you.”

The heritage portion of the First People’s Map demonstrates the connection between the land and Indigenous cultural heritage. Each point of cultural interest relates to First Nations people and their unique knowledge of their environment.

“It provides information about First Nations cultural sites that aren’t necessarily represented on a lot of other maps,” said Mashon. “It's really unique that the map is able to include all this information together in one space.”

Mashon says the content is curated from 204 Indigenous communities from across the province.

Mashon says the FPCC developed the map focusing on specific communities to illustrate the connection First Nations Peoples have to the land. She says the FPCC consulted with First Peoples communities across the province to gather information with respect to arts, language and culture.

“We wanted to make (the map) as user friendly and as accessible as possible for Indigenous and non-Indigenous people to learn about the Indigenous cultures of B.C.,” said Mashon. “We want to invite people to use the map to educate themselves, explore all of the diversity and the richness of the cultures, to learn something new and celebrate Indigenous Peoples.”

Visitors to the FPCC First Peoples’ Map can search by geographic locations, navigating the website’s sidebar or by keyword. They can listen to audio pronunciations of First Nations’ languages, find artists and locate important First Peoples cultural sites.

“There‘s a real thirst for people to want to learn more about their Indigenous neighbours and this is a great way to access that information to honour Indigenous Peoples and their culture,” said Mashon. “I believe that (the map) is definitely a first step for people if they’re on their journey of reconciliation.”

The First Peoples Map can be found on the FPCC website here.