After a weekend beach fire nearly grew out of control, the Victoria Fire Department is reminding residents that open burning is not allowed within city limits.

Firefighters say several beach fires were lit in Victoria over the weekend, including one off Dallas Road that required emergency intervention.

"People build these giant structures and light them up, and you can see how close it is to the bank," said Stephen Ellis with the Victoria Fire Department.

"Our crews had to act swiftly to put it out before it spread to the rest of the driftwood and possibly up the bank," he said. 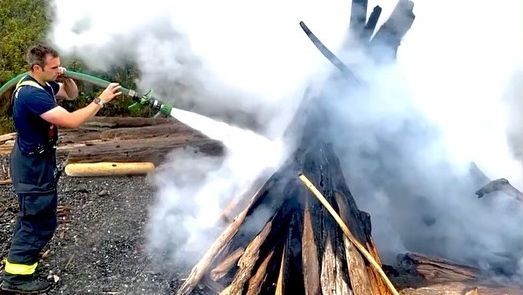 Open flames are not permitted in public spaces, though some backyard devices are allowed.

"You are allowed to use a BBQ and a propane ring and stuff like that in your backyard," said Ellis.

If you want to light a campfire on Vancouver Island you'll have to visit a designated site.

Officials say you should check with the BC Wildfire Service's Coastal Fire Centre for any potential restrictions before you do so, however.

"We do have our website you can go on," said Samantha Suddes with the Cosatal Fire Centre. "We also have our mobile app. The app provides updates and you can check that out. It will also show any weather updates and things like that, [the] fire rating."

A wet start to summer has kept fire risks in the backcountry low for now.

The early indication is that a fire ban will not be in place for this weekend. However, officials are always checking conditions.

"We do update the fire rating every day at 2 p.m.," said Suddes.

The Victoria Fire Department says it understands the temptation of having a beach fire during the summer.

"Fires are really nice, I'm sure we'd all love to do it," said Ellis. "The best place to do it is where you're allowed."

Once you do find a spot where you're allowed to start a fire, make sure you have water on hand to douse the flames and that all the coals are cool to the touch when you leave.

Actor Anne Heche has died after suffering a brain injury following a car crash last week, according to her family. She was 53.

Salman Rushdie, the author whose writing led to death threats from Iran in the 1980s, was attacked and apparently stabbed in the neck Friday by a man who rushed the stage as he was about to give a lecture in western New York.

A Quebec Superior Court judge has temporarily suspended two articles of the province's new language law, saying they could prevent some English-speaking organizations from accessing justice through the courts.

A federal judge was to decide as soon as Friday whether to grant the Department of Justice's request to unseal the warrant that authorized the FBI to search former U.S. President Donald Trump's Florida estate. Attorney General Merrick Garland declared there was 'substantial public interest in this matter,' and Trump backed the warrant's 'immediate' release.