A Central Saanich, B.C., woman is grateful that her desperate plea to find a family doctor for her ailing husband has been answered.

Janet Mort had been searching for a year for a family doctor who could simply refill her 82-year-old husband's prescriptions.

On Saturday, she took out an ad in the Times Colonist newspaper desperately seeking a general practitioner for her husband, Michael Mort.

Like so many in B.C., Michael had been without a doctor for six months. On top of that, his health complications mean he needs nine prescriptions that he was unable to fill.

The situation had Janet desperate to buy a newspaper ad for help.

"We will agree to any reasonable fee: Michael is worth it," the ad continues. 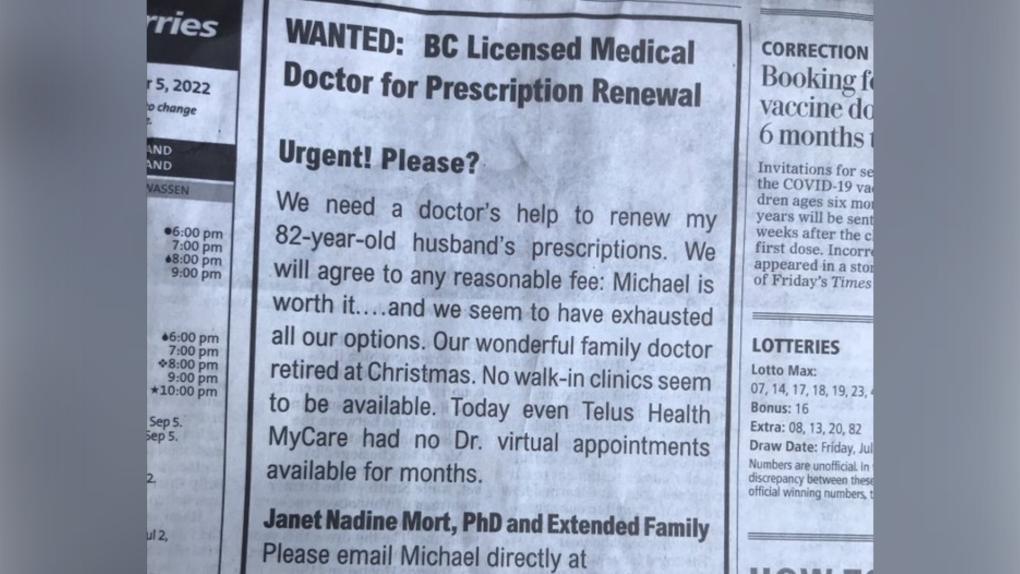 This photo, shared by CTV News Vancouver Island's Rob Buffam on Twitter, shows an ad placed by a B.C. couple in the print edition of the Victoria Time Colonist.

Fortunately, Janet's ad grew major attention online, generating hundreds of emails, and on Tuesday a doctor in the Victoria area agreed to take on Michael as a patient.

"I can't tell you how relieved I am, because we were on the precipice of a terrible situation," said Janet.

"If it weren't for my sweetie, none of this would be happening," said Michael. "She is the hero in this story."

But the Morts know that there's nearly a million other British Columbians who are living without a family doctor.

"That's tempered by guilt," said Janet. "I feel, 'Why me? Why Michael?' There's so many people out there, we've got hundreds of emails from people who are struggling just like we've been struggling."

B.C.'s top doctor says the Ministry of Health is working on solutions to the doctor shortage.

"We know that there has been a shortage and we've had a stretched healthcare system even before the pandemic, but it's made it worse," said provincial health officer Dr. Bonnie Henry on Tuesday.

"So I know this is something that the ministry is working on," she said.

In a statement, the province pledged to continue working on the doctor shortage and pointed to temporary solutions put in place, like the opening of new urgent primary care centres and funding for walk-in clinics.

B.C. Liberal MLA and Health Critic Shirley Bond says the elderly couple's situation is a reflection of B.C.'s struggling healthcare system and something many British Columbians are feeling "every single day in our province."

"I think all of us have to get more vocal about the situation we're in," said Janet.

"It was really hard. I will [say] how I felt the day I placed the ad, I was ashamed. I was ashamed that I had to put my family out there," she said.

Climate change will make home insurance more expensive for all of us and unaffordable for some, experts say

Father and teen charged with fatal shooting of rapper at L.A. restaurant

A man who was arrested in Las Vegas on Thursday, and his 17-year-old son, were charged with murder in the fatal shooting of rapper PnB Rock at a South Los Angeles restaurant, authorities said.

Helium shortage 4.0 continues, and it's not just bad for party balloons

This northern territory is the set of Indigenous-focused slasher movie

Canada's largest territory is the backdrop of an Indigenous-focused alien movie that follows a ragtag group of teens fighting to save their community.

A former National Security Agency employee from Colorado is accused of trying to sell classified information to a hostile foreign government in an attempt to pay off his debts and 'help balance' the world's scales, according to court documents released Thursday.