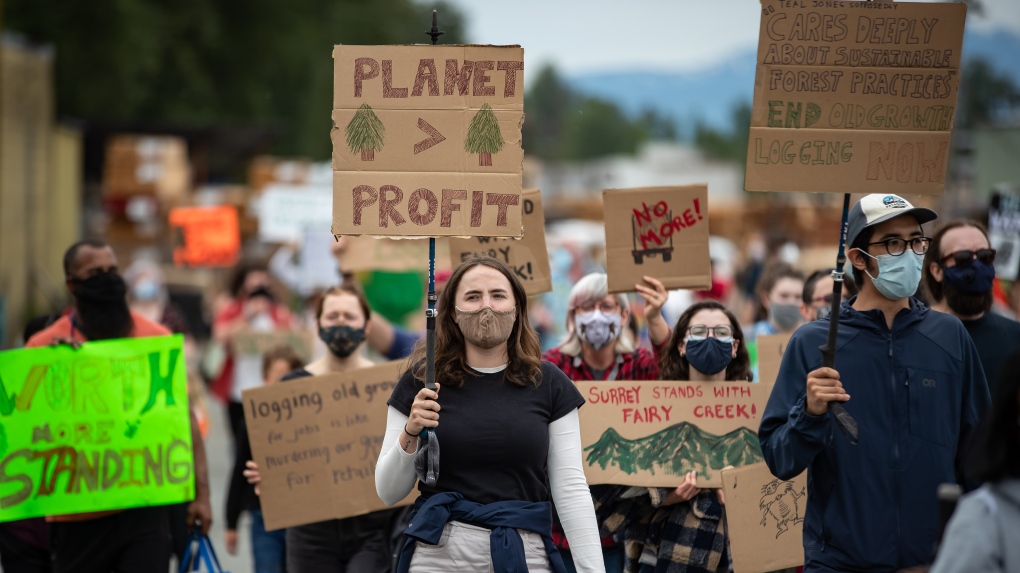 Protesters march during a demonstration against old-growth logging, at Teal-Jones Group sawmill in Surrey, B.C., on Sunday, May 30, 2021. Teal-Jones holds licenses allowing it to log in the Fairy Creek Watershed on Vancouver Island. THE CANADIAN PRESS/Darryl Dyck
Nanaimo, B.C. -

A court injunction against old-growth logging protests on Vancouver Island will remain in effect beyond its expiry date later this month at least temporarily, says a judge who will rule on its future.

British Columbia forestry company Teal Cedar Products Ltd. was in court this week applying for a one-year extension to the injunction, which was set to expire on Sept. 26.

But Justice Douglas Thompson said Friday it will be a matter of weeks before he provides his written decision on the request for an extension.

“It's a difficult decision,” he said at the conclusion of four days of hearings in B.C. Supreme Court. “I frankly don't know what I'm going to do at this point in time. It will probably be a matter of weeks.”

About 1,000 people have been arrested in the Fairy Creek area north of Port Renfrew since the RCMP started to enforce a B.C. Supreme Court injunction in May.

“But this is a court of law, not of public opinion,” he said.

He said not extending the injunction would be seen to condone the protests.

“The worst thing that could happen for the injunction is for it to lapse even for a day,” said Dalke, who told the court the blockades are impeding the company's legal rights to harvest timber.

Lawyers for a half dozen protesters disagreed with Dalke, arguing in favour of denying the injunction extension. They proposed allowing the injunction to expire and entering into a mediation process to resolve the issues of protecting ancient forests and logging interests.

Lawyer Steven Kelliher, representing Victoria landscaper Robert (Saul) Arbess, who opposes logging in the Fairy Creek area, said tensions at the blockades are rising and he fears people could get hurt.

“All for what, an injunction that should never have been issued in the first place,” he said.

Lawyer Elisabeth Strain, who showed the court videos of police pulling off the face masks of people at the blockades before dousing them with pepper spray, said the RCMP and the company have sought to “demonize” the protesters.

She said she supports mediation as a way to resolve the ongoing situation at Fairy Creek.

“Everything needs to calm down,” she said. “If the injunction continues and police enforcement continues, it's only going to escalate. The longer it goes the more likely somebody is going to be seriously hurt.”

Earlier Friday, the RCMP told Thompson it needs more powers to search and exclude people from the area.

This report by The Canadian Press was first published Sept. 17, 2021.

Ontario Premier Doug Ford refused to apologize for comments he made about immigrants coming to the province 'to collect the dole,' instead saying that he is 'pro immigration.'

The gang that kidnapped a group of 17 American and Canadian missionaries in Haiti has asked for US$1 million each for their release, a top Haitian official told CNN Tuesday. The 16 American citizens and one Canadian were kidnapped by the powerful '400 Mawozo' gang on Saturday.

Having mono in adolescence may increase MS risk later in life: study

Having infectious mononucleosis, also known as mono, during childhood and adolescence may be a risk factor for developing multiple sclerosis later in life, a new study suggests.

Rechie Valdez has turned self-described 'side hustles' into full-time focuses as an entrepreneur, and is now taking on a new challenge: Liberal MP for Mississauga-Streetsville. In taking her seat in the House of Commons next month as one of 50 rookies elected, she'll also be making history as Canada's first federally-elected Filipina MP.

Newfoundland and Labrador has unveiled details of what it says will be the country's first tax on sugary drinks.