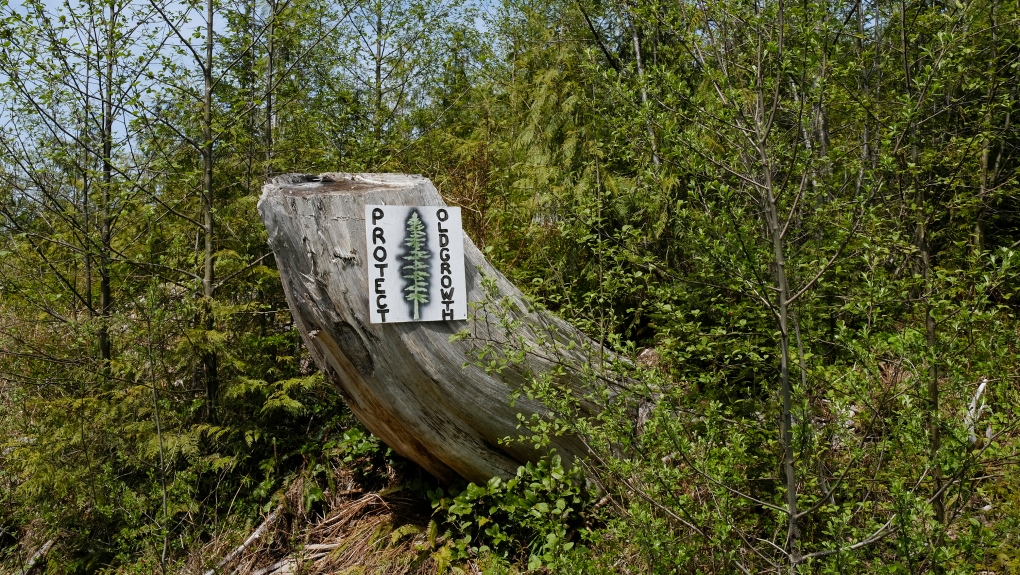 A sign posted on a dead tree on the Bugaboo, a logging road in the Fairy Creek area near Port Renfrew, is shown on Tuesday, May 11, 2021. A number of blockades are set up in the area to prevent the logging of old-growth forests. THE CANADIAN PRESS/Jen Osborne
Vancouver -

RCMP say they've made 989 arrests since enforcement began around the Fairy Creek watershed, and 110 people have been arrested multiple times.

Protesters have been camped out in the area for more than a year to defend what they say is the last unprotected old-growth forest on southern Vancouver Island.

Since police began enforcing the injunction in May, protesters have repeatedly accused them of violence and lies, while Mounties have accused protesters of endangering the safety of themselves and others, in addition to defying the court's order.

Another example of this tension played out on Friday night and the early hours of Saturday morning.

The police version of events, as described in a news release Saturday, is that a group of protesters snuck past the RCMP "access control point" late Friday night and began setting up "obstructions" on forest service roads.

Around 1:15 a.m. Saturday, according to police, one of the protesters "fell down a ravine and injured their head."

"Despite the injury, it took some time for police to negotiate with the contemnors to clear the road so their colleague could be transported," police said in their release.

Police added that they brought the injured person to a waiting ambulance, and said the person's condition was "unknown" as of Saturday evening.

The protesters say 60 people hiked through the woods around midnight and split up into small groups to begin setting up roadblocks.

They heard a vehicle approaching and scattered, with some jumping into the bush, while others stood their ground and linked arms to confront the vehicle. Those who locked arms called the others back to the group.

"As they locked their arms together on the remote stretch of road, they realized they were suddenly short one person," protesters said in their Facebook post.

"It appeared they were lacking a very sweet elderly man who had been a fixture around camp for several months."

According to protesters, police ordered them to clear the road to allow an ambulance through, saying the missing man had fallen into a blackberry bush and was seriously injured.

"Out of concern for his safety the group cleared the area, all the while knowing that the RCMP’s demands seemed disingenuous," protesters said. "In the end, aside from a few scratches on his face from the fall, he walked away completely without injury."

The B.C. government approved the request of three Vancouver Island First Nations to temporarily defer old-growth logging across about 2,000 hectares in the Fairy Creek and central Walbran areas this summer, but the protests have continued.

Old-growth forests outside the deferred areas are still at risk of logging, members of the protest group dubbed the Rainforest Flying Squad have said.

The injunction granted to the Teal-Jones Group - the forestry company that holds the harvesting licence in the area - is set to expire later this month. Court hearings are scheduled in Nanaimo this week over an application by Teal-Jones for a year-long extension.