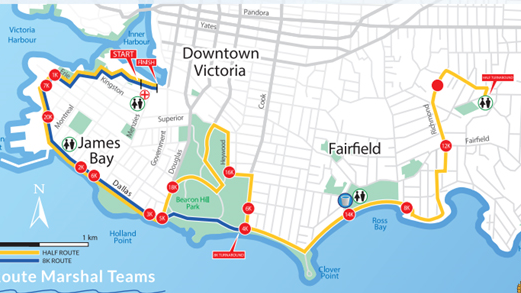 Commuters should expect several road closures in Victoria this weekend as runners take to the streets for the 2021 Royal Victoria Marathon.

More than 4,500 participants have signed up for the event, which features an eight-kilometre race and half marathon. A full marathon is not being held this year.

Roads will be closed for race setup on Saturday evening, and will continue to be closed on Sunday morning when the event takes place.

The following streets will be closed on Saturday for race setup:

The following roads, along Dallas Road and the Inner Harbour, will be closed Sunday. All times are approximate, according to the Royal Victoria Marathon.

No vehicle parking will be available along the race route until approximately 1 p.m. Sunday.

Victoria police will also be monitoring the event.

"Our officers will be working to help minimize traffic disruptions and keep those participating in the races safe," said VicPD in a release Friday.