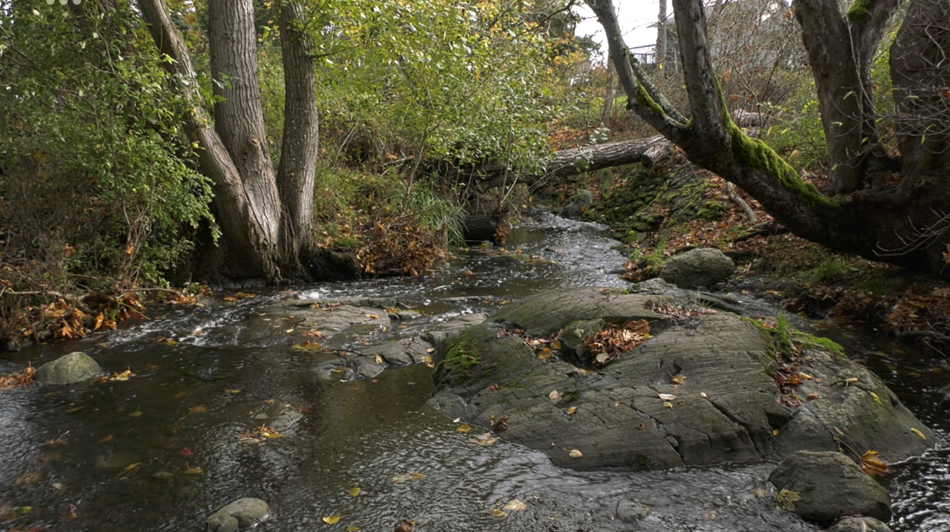 Volunteers from the Friends of Bowker Creek Society say uncovering caddisfly larvae in the gravel beds of the stream show the water quality has improved to a level sufficient to sustain salmon and cutthroat trout.

Members of the salmon habitat conservation group have been working for more than a decade to restore Bowker Creek from a heavily polluted stream to a salmon-bearing habitat. They say the discovery of the larvae is a key indicator that their efforts are beginning to prove fruitful.

“It’s a good sign that over the past year this little part of the stream here has not seen too much pollution,” said Friends of Bowker Creek Society director Gerald Harris. “These caddisfly survive only in water that is not too polluted, and they are the kind of fly that you would find in a healthy salmon or trout stream.”

Harris says members of the society have devoted thousands of hours to removing invasive plant species from the banks of the creek. He says volunteers have also placed gravel in the stream to create spawning beds as part of the restoration project.

“The caddisfly are found under the gravel at the bottom of the stream,” said Harris. “Salmon and the caddisfly are both part of a healthy ecosystem because if you find salmon and trout you are going to find the type of insects that require the same level of water quality.”

The eight-kilometre urban waterway flows through the districts of Oak Bay and Saanich, and the City of Victoria. Harris says more than 60 per cent of the creek runs through series of culverts under park land, streets and Hillside Mall. The stream opens to the ocean near Willows Beach in Oak Bay.

Harris says he is hopeful that the stream is once again a viable habitat to sustain salmon. He says the last recorded sighting of chum salmon in the stream was near the Royal Jubilee Hospital in 1914.

“We are really excited about finding plenty of caddisfly larvae in the stream,” said Harris. “It bodes well for water quality which bodes well for survival of salmon and we really want to see those salmon thrive in Bowker Creek.”

Harris says the recent water quality samples were gathered by volunteers from the society along with staff from Biologica Environmental Services. He says the analysis of the samples is being donated to the Friends of Bowker Creek Society by the Victoria-based environmental services company.

Although the latest water quality samples, along with the discovery of the caddisfly larvae, indicate the creek is showing signs it has become a healthier stream, Harris says the results of the tests won’t be available until early 2022.

He says the timing of the return of the caddisfly to the creek is ideal because the society has plans to place more than 30,000 chum salmon eggs in gravel bed incubators in February 2022. The hope is that the salmon will return spawn in Bowker Creek in fall 2025.

“The discovery of the caddisfly suggests that water quality right through the period we will have the eggs incubating is probably good enough to keep those salmon eggs alive,” said Harris. “We’re working with chum salmon, but down the road wouldn’t it be wonderful to have Coho salmon and cutthroat trout back in the stream as well?”