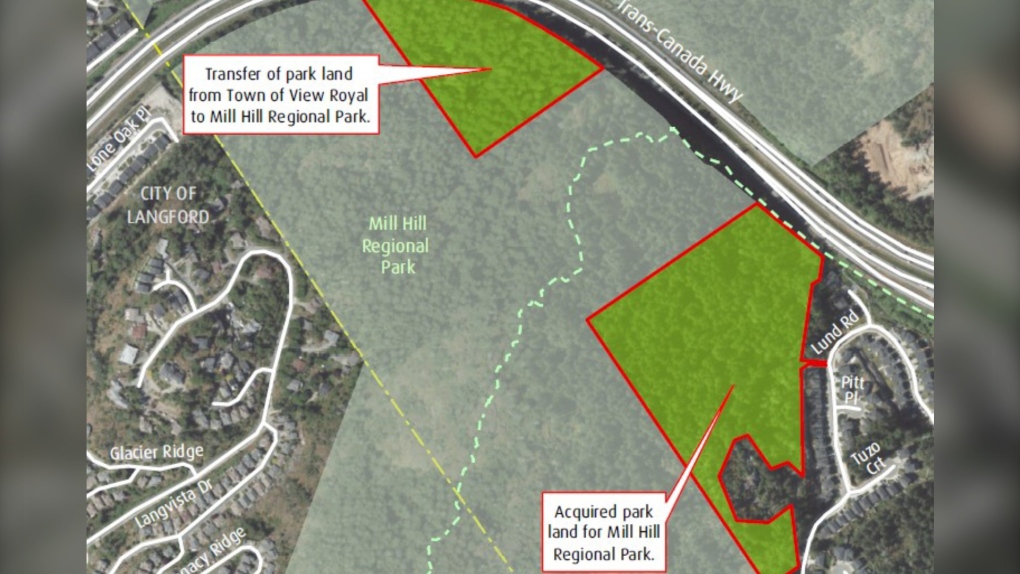 The Capital Regional District is adding nearly 10 hectares of land to the Mill Hill Regional Park, after it bought the land from the Town of View Royal for more than $900,000.

The 9.8 hectares of land is spread out across four parcels located beside Mill Hill Regional Park, south of Thetis Lake.

The CRD purchased the land, which contains Douglas firs and arbutus trees, for $927,500.

The four parcels also run through the Craigflower and Millstream Creek watersheds, according to the CRD.

Preserving the land will help protect the watersheds and the other ecosystems that rely on them, says the regional district.

"Mill Hill Regional Park is one of the most significant Garry Oak sites in the region and represents one of the highest concentrations of plant species at risk in British Columbia,” said CRD board chair Colin Plant.

"This additional land helps to complete the Mill Hill Regional Park boundary and acts as a protective buffer for some of the high-value rare plant species found there," he said in a statement Wednesday.

The CRD says it was View Royal that first proposed the sale. The town plans to use the money from the sale to purchase other parkland within the municipality.

"This sale to the CRD simply makes a lot of sense," said View Royal Mayor David Screech in a statement.

"It ensures continued public ownership of open space and the long-term management and maintenance by an organization that is well-equipped to take on this responsibility – a win-win not only for View Royal’s residents, but also for those in the entire region," he said.

BREAKING | Ontario woman sexually assaulted by Jacob Hoggard says she is suing him for $2.8M

Eric Weinberg, an executive producer and writer for the hit TV show 'Scrubs' and many others, has been charged with sexually assaulting five women that he lured to photo shoots and there could be many more victims, Los Angeles County prosecutors announced Wednesday.