As summer-like conditions creep into early October, water levels on the Nanaimo River are low. That is bad news for spawning Chinook salmon.

"Most of them are stuck down in the deep pools in the lower river where they can’t get up and get to their spawning grounds," said Brian Banks, manager of the Nanaimo River Hatchery.

On Wednesday, the City of Nanaimo released water from its reservoir into the Nanaimo River. It is the first time a release has been needed in five years.

"This water release is going to help the Chinook mostly get up to their spawning grounds," said Banks.

On the South Island, the Colquitz River is extremely low as well.

"The salmon have been seen jumping and holding in Portage Inlet," said Dorothy Chambers, with local environmental group Salmon in the City.

Waiting for rain, those Coho salmon will stay put in the inlet until the rains come. The problem is, seals have moved into the area feasting on those waiting salmon.

"We need to have a very good rainfall, which is called the flush," said Chambers.

The first rains will flush the urban storm drains of their toxins, like oil from roads.

Many storm drains run into the Colquitz River and those toxins have been proven fatal to Coho salmon.

There is a weir at Beaver Lake that can feed the Colquitz River when it gets low.

"I don’t want to see water released quite yet because we haven’t had that first flush," said Chambers.

Nicolette Watson, stock assessment technician with the Department of Fisheries and Oceans, agrees that rainfall is needed in the region.

"We very much need rain all around the coast right now," she said. "It’s very dry."

A graphic example of what prolonged summer weather can do to salmon populations was recorded in Bella Bella, B.C. last week.

Tens of thousands of salmon were seen lying dead in a dried up riverbed in Bella Bella.

"Nobody in the community has ever seen anything like this before." 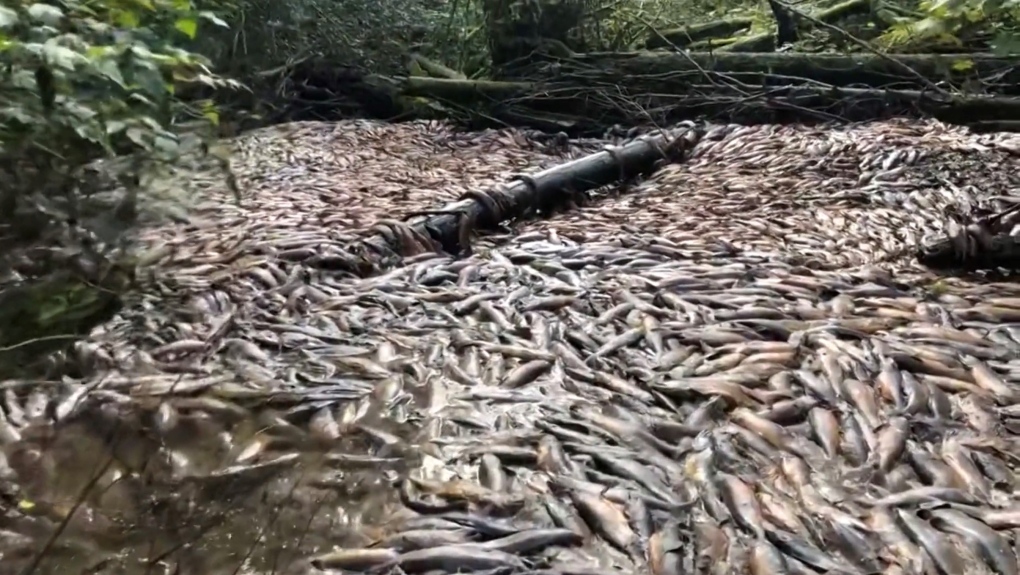 Tens of thousands of dead salmon are pictured in Bella Bella, B.C.

The mass die-off is part of a growing problem that salmon experts say we're going to see more of in the future.

"As global warming continues at the pace that it’s at," said Lina Azeez with the Watershed Watch Salmon Society.

In the Comox Valley, BC Hydro has redirected the water flows from the Comox Lake Reservoir into the Putledge River because the river is getting low.

On Tuesday, flows were also reduced on the Cowichan River to conserve water due to a dry forecast.

According to Environment and Climate Change Canada, rains are expected to arrive on Monday, but only about five millimetres, which is still not enough to make a difference on our thirsty rivers.

Canada is the third most generous contributor to the group, the Association internationale de cooperation medicale, a non-governmental organization that receives support from the Canada-Ukraine Foundation and the Ontario government.

Barely a month after granting himself new powers as China's potential leader for life, Xi Jinping is facing a wave of public anger of the kind not seen for decades, sparked by his 'zero COVID' strategy that will soon enter its fourth year.

The niece of Iranian Supreme Leader Ayatollah Ali Khamenei is calling on people to pressure their governments to cut ties with Tehran over its violent suppression of anti-government protests.

Wouldn't it be nice to never have to work again? While this may sound like a dream to many, it is entirely possible. CTVNews.ca personal finance contributor Christopher Liew shares a handful of helpful tips on how to potentially achieve financial independence.

Kim Kardashian says she is 're-evaluating' her working relationship with Balenciaga after the luxury fashion house featured children cuddling teddy bears dressed in bondage gear in its latest advertising campaign.