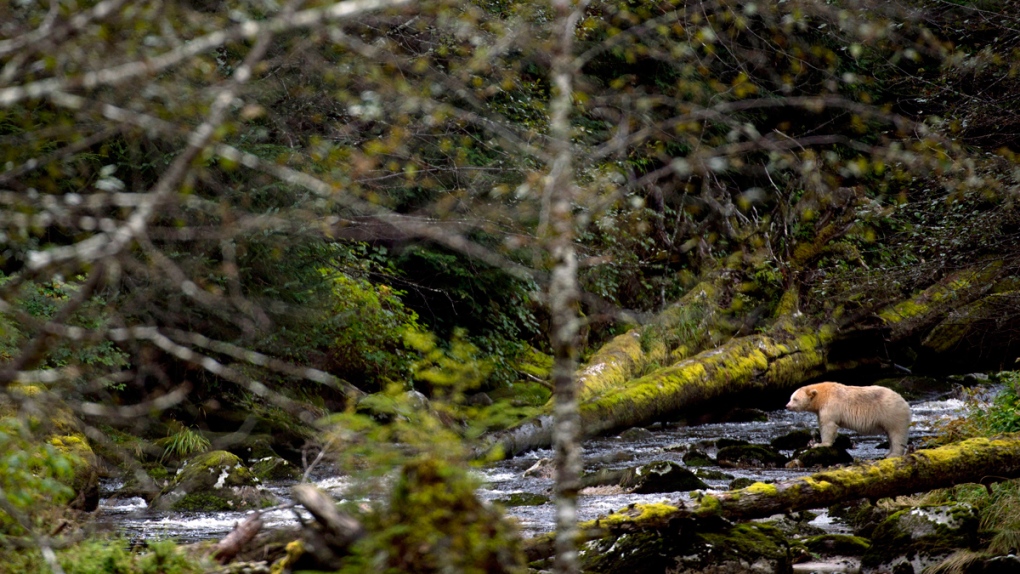 A Kermode bear fishing in the Riordan River on Gribbell Island in the Great Bear Rainforest, B.C., on Sept, 18, 2013. (Jonathan Hayward / THE CANADIAN PRESS)
Victoria -

The Raincoast Conservation Foundation is hoping to protect even more animals in the B.C. Great Bear Rainforest by purchasing its sixth trophy hunting tenure in the area.

Raincoast says purchasing this sixth tenure will protect dozens of species from being commercially trophy hunted as it gives the foundation the exclusive rights to commercially guide trophy hunters in perpetuity.

The foundation is purchasing the 18,239-square-kilometre tenure for a price of $1.92 million with a commitment to have a $200,000 down payment by the new year, should fundraising efforts be successful.

The group has already raised just over $100,000 and says it will be tight to make that commitment. But, organizers are hopeful the goal will be reached.

"I’m quite confident, we have had great support for this project," said Brian Falconer, guide outfitter coordinator for Raincoast.

"It’s such an easy thing for people to see," he said. "I mean, literally, you're directly buying the lives of these animals, and although this a very large one, and a significant amount of money and will be challenging, we’ve had great support for it."

The foundation began purchasing hunting tenures back in 2005 to ensure the protection of large carnivores in the Great Bear Rainforest.

Raincoast currently holds the hunting rights to more than 38,000-square-kilometres of the B.C. coast – an area larger than Vancouver Island.

The region is home to significant populations of grizzlies, black bears, cougars, wolves, and Roosevelt elk. It contains six major coastal inlets, more than 10 major river systems with critical estuaries, and countless smaller named and unnamed watersheds that support healthy ecosystems – from Smith Inlet to Toba Inlet – according to Raincoast.

The group says that purchasing this next tenure will support a non-extractive conservation economy, as there are more than 19 eco-tourism companies within this tenure who rely on respectful wildlife viewing.

Raincoast has committed to paying off the $1.92 million in two years. Donations to the project can be made here.