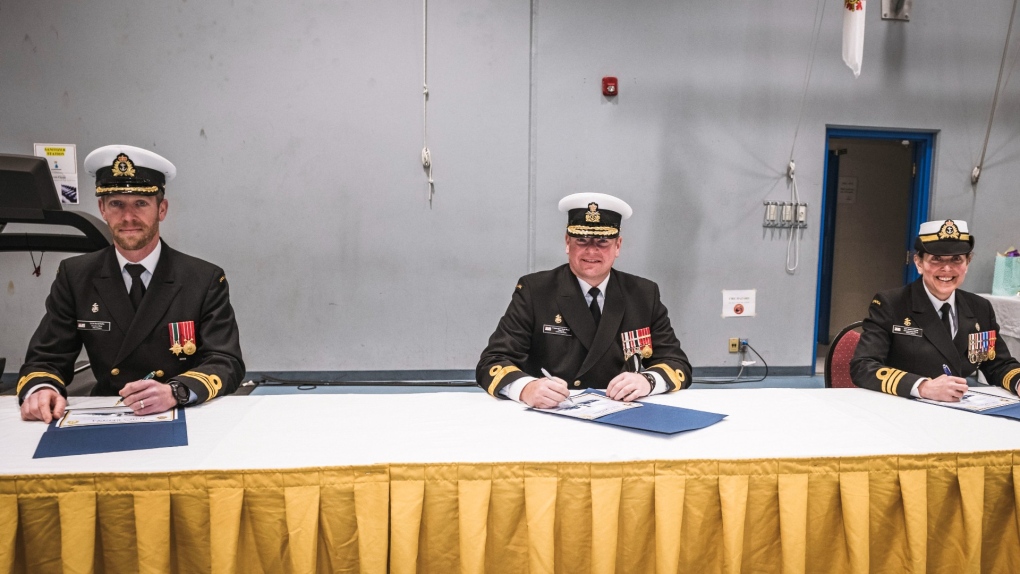 Lt.-Cmdr. David Dallin (left) will no longer serve as the commanding officer of HMCS Regina, according to a statement from Commodore David Mazur (centre), the commander of Canadian Fleet Pacific. (Twitter/@MARPAC_FMARP)

The commanding officer of a Royal Canadian Navy vessel based in Esquimalt has been relieved of his duties, the Canadian Armed Forces announced Thursday evening.

Lt.-Cmdr. David Dallin will no longer serve as the commanding officer of HMCS Regina, according to a statement from Commodore David Mazur, the commander of Canadian Fleet Pacific.

"The Royal Canadian Navy has lost confidence in Lt.-Cmdr. Dallin's judgment as a result of an incident that recently took place on another vessel during a naval training exercise," Mazur's statement reads.

The commodore did not elaborate on the details of the incident, other than to say that it remains under investigation and "it involved inappropriate conduct."

"The RCN expects all its members to exercise institutionally appropriate judgment at all times, especially when in clear leadership or command roles," Mazur's statement continues.

Cmdr. Meghan Coates has assumed command of HMCS Regina, a change of command that was already in the works and had been planned for later in the summer, according to Mazur, who added that the change will have no impact on the ship's program.

Dallin will serve in other roles at CFB Esquimalt while the investigation into his conduct is ongoing, the commodore said.

A new report says Canada needs to change its federal visa policy to speed up the admission of Ukrainian refugees, which has slowed to a trickle.

Rising interest rates might be bad news for Canadians with mortgages, but it also means higher rates on savings vehicles such as guaranteed investment certificates (GICs), prompting renewed interest in the investments.