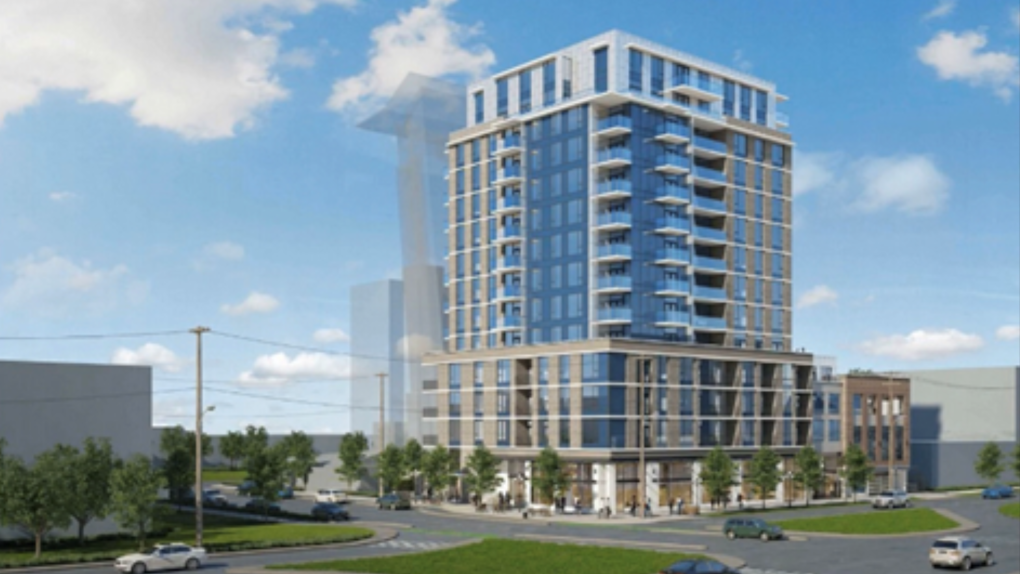 A rendering of the 16-storey purpose-built rental building is shown at the corner of Victoria’s Pandora Avenue and Vancouver Street: (Townline)

The City of Victoria has approved a 16-storey purpose-built rental building that will include first-of-a-kind co-living suites.

The project will be constructed at the corner of Pandora Avenue and Vancouver Street and will include 54 fully furnished three, four and five bedroom co-living "pods."

"The demographic will be people new to the City of Victoria that are going there for work and may want a shorter opportunity for rentals," said Townline senior vice president Chris Colbeck.

"It may appeal to people craving social interaction and that are suffering from an 'urban-loneliness' that we’ve seen during the pandemic," he said.

Colbeck says each of the co-living rental units will be interspersed with other suites of the building on the site of the former Victoria Seventh Day Adventist Church.

He says, including the co-living "pods," the project will add 121 purpose-built rental units to Victoria’s tight rental market.

Townline says the design of the co-living suites will include an ensuite bathroom for most bedrooms and a shared, fully equipped kitchen with a large island.

Each bedroom will provide tenants the flexibility of a Murphy-bed that, when folded up, offers ample space for activities or socializing, according to Townline.

"It's about socialization and socialization opportunities and that really is the main driver for us, to create a social environment," said Colbeck.

"What makes co-living unique is all utilities will be included in (the tenant's) monthly rent."

Victoria’s Mayor says the co-living model not only provides a more affordable housing alternative, but also offers people a feeling of community.

"The pandemic has changed the way we live," said Victoria Mayor Lisa Helps.

"People are feeling lonely and they’re feeling isolated," she said. "I think this new housing form is going to be very well received by a range of people."

Helps says any project that adds density to the city’s downtown core is a good thing. She says with the project’s proximity to public transit, bike lane infrastructure, and shopping, people who live in the building won’t need cars.

"It's an ideal location and it will make great homes for people in the coming years," said Helps.

"I think it is a really innovative (housing) model and to see this type of architecture, I think it is the way of the future, especially with the limited land footprint in Victoria. So hopefully this is the first of many," she said.

Colbeck says in addition to a more socialized style of living, the co-living rental units are also an affordable alternative to more traditional housing options.

He says when completed, the co-living units will have a monthly housing cost of approximately 30 percent less than the market rent of a studio suite.

"Co-living is a choice and we will have a lifestyle curator who will program social events in and outside the building," said Colbeck.

"The big thing is the lifestyle choice, people who are looking for that social interaction, and we’re providing a vertical community and we’re going to curate it for our tenants."

Townline says construction on the 16-storey building will begin in June of 2022. It expects tenants to start moving in by mid-summer 2024.

BREAKING | Jason Kenney steps down after 51.4 per cent approval in leadership review

Some are calling attention to a comment about 'Anglo-Saxon words' that Conservative leadership candidate Pierre Poilievre made while appearing as a guest on controversial psychologist Jordan Peterson’s podcast. The term has been used by those on the far-right to differentiate white people from immigrants and people of colour.

Ed Fast is no longer the Conservative finance critic, interim party leader Candice Bergen says. Bergen said in a statement late Wednesday that Fast informed her he will be 'stepping away from his duties.'

Matthew Tkachuk scored a hat trick for the Calgary Flames in Wednesday's 9-6 win over the Edmonton Oilers to open their NHL playoff series.

It has been almost exactly one year since the Tk'emlúps te Secwépemc confirmed evidence of what elders and residential school survivors had been saying for years about missing children being buried on the grounds of the former Kamloops Indian Residential School.

The second strike in CFL history is over. The CFL confirmed Wednesday night that it and the CFL Players' Association reached a tentative collective bargaining agreement.