A video of an island seemingly "moving" off the coast of Vancouver Island is making waves on the internet.

The video was taken by Canadian Geographic explorer George Kourounis while he was aboard a tour with Maple Leaf Adventures in the Slingsby Channel area, about an hour by boat from Port Hardy.

In the video, a landmark known as Tremble Island appears to be moving. The optical illusion was captured when the Maple Leaf vessel was sailing west as fast-moving water was flowing east against the island.

Slingsby Channel has some of the fastest tidal surges in the world, according to Maple Leaf, and Tremble Island sits at the narrowest point of the channel.

The island even gets its namesake from the extreme force of the waves, which can make the island feel like it's shaking or trembling, says Maple Leaf.

The video was taken early this summer, but it wasn't posted online until late August. Since then, the video has been seen more than 662,000 times, according to the company.

Maple Leaf Adventures CEO Kevin Smith, who was the expedition leader when the video was taken, says Tremble Island is known among some B.C. mariners for its rushing waters.

In the video, signs can be seen hanging or placed on the island. Smith says that these signs are planted on the island as a tradition by some sailors who are "brave enough or have a capable enough vessel" to sail a small boat onto the landmark. 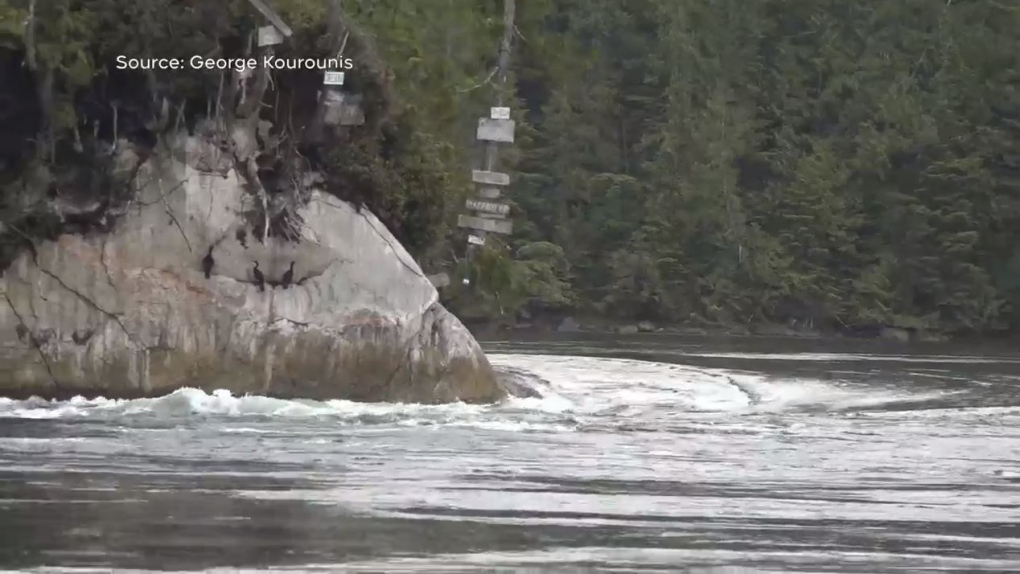 Smith adds that another Maple Leaf crew planted their own sign there recently, after they helped remove trash from along B.C.'s coastlines, as part of the province's "Clean Coast, Clean Waters" program.

Smith says he was proud to show this corner of B.C. to Kourounis, because the pair are both members of the Royal Canadian Geographical Society.