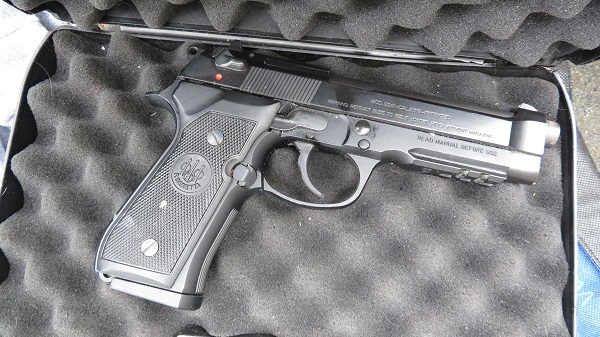 The gun that was reported stolen out of Nanaimo is shown: (West Shore RCMP)

VICTORIA -- Police say a vehicle that was displaying the wrong licence plates led to the discovery of a "significant drug trafficking operation" in Saanich.

West Shore RCMP says officers were in the Malahat area on June 14 when they spotted a vehicle heading northbound on the highway. Police ran the licence plate numbers and found that the plates were registered to a different car.

Mounties followed the car until it stopped at an empty parking lot near Duncan, at which point police went to speak with the driver.

As the officers approached, police say the vehicle "immediately accelerated" and drove towards the officers, ultimately ramming the front of one police vehicle and sideswiping another.

The vehicle drove away from the scene and police did not pursue it in the interest of public safety.

Shawnigan Lake RCMP officers located the car later that day and arrested two people without incident, according to police.

Inside the vehicle, investigators say they found a loaded Beretta handgun that was reported stolen from Nanaimo in August 2020, over three ounces of suspected fentanyl, smaller amounts of suspected cocaine and meth, more than $15,000 in cash, "numerous" collapsible batons and multiple cans of bear spray.

A search warrant was then executed at a residence in Saanich, involving officers from the West Shore RCMP, Saanich police and Greater Victoria Emergency Response Team.

At the property, police say they found signs of a significant drug trafficking operation, including a large quantity of GHB, a sedative sometimes referred to as the date-rape drug, as well as ammunition and a replica handgun.

"This is one example of the ongoing proactive work being done by our officers and the risks they face daily," said West Shore RCMP Supt. Todd Preston.

"Through hard work and teamwork, we have disrupted a substantial drug trafficking operation and removed multiple weapons from the community," he said.

Brandon Seguin, 26, is now facing several recommended charges related to drug trafficking. The charges include possession of fentanyl and methamphetamine for the purpose of trafficking, possession of a prohibited firearm, flight from a peace officer and dangerous operation of a vehicle.

A 38-year-old Saanich woman who was a passenger of the vehicle at the time is also facing recommended charges of possession of a controlled substance. RCMP say both individuals are known to police.