Boom truck knocks out power to more than 1,000 in Langford, B.C.

Boom truck knocks out power to more than 1,000 in Langford, B.C. 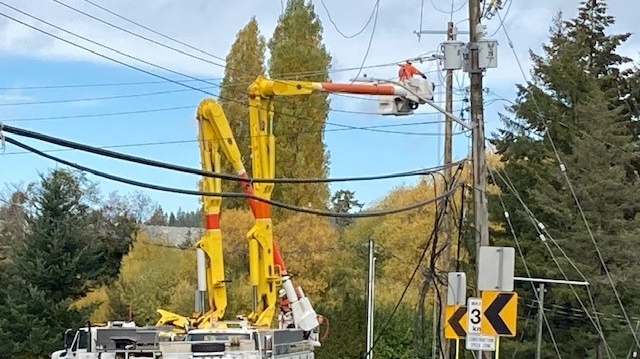 A truck equipped with a small crane is to blame for a power outage that left more than 1,000 BC Hydro customers without electricity Monday morning.

Langford Fire Rescue tells CTV News that a boom truck did not entirely lower its boom, which then got caught on power lines on Millstream Road.

The truck pulled against the power lines, causing one hydro pole to snap and drop wires across the road.

Around 7:30 a.m., West Shore RCMP reported that power lines had fallen on Millstream Road and that the street was closed between Treanor Avenue and Bear Mountain Parkway Monday morning.

Langford Fire Chief Chris Aubrey says the driver of the truck was uninjured in the incident, though they were trapped inside the car for sometime until BC Hydro was able to confirm the power lines were disconnected and they could safely leave the vehicle.

In an update around noon, BC Hydro estimated that power would be restored by 5 p.m. as crews continued to work on repairs.

The downed power lines also affected public transit, with BC Transit and the Sooke School District telling travellers that buses were detouring around the closed street.

One school also had to end the day early because it had no electricity.

Families with children at Ecole Millstream are able to pick up their children now. The school is in the process of notifying families. There was a power outage this morning (Oct 31), and BC Hydro has updated that they do not expect the power to return until early this evening.

Drivers were told to expect delays in the area and take alternate routes if possible.

Ottawa police and Bylaw Services are telling residents and visitors they will be taking a zero-tolerance approach to parking, noise and fireworks violations downtown this weekend, on the one-year anniversary of the 'Freedom Convoy' demonstration.