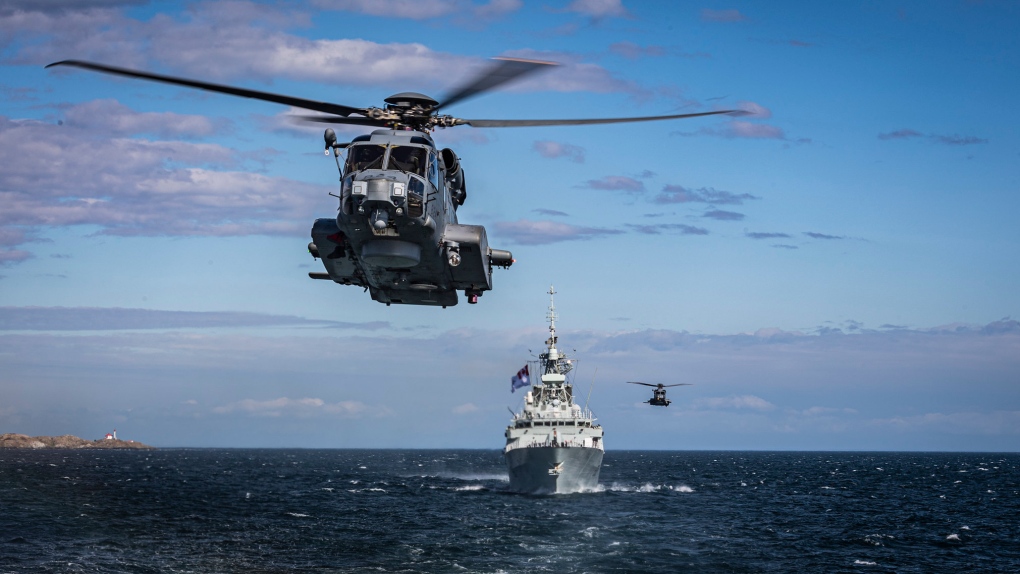 The Canadian military will send four warships and 800 soldiers, sailors and aviators to this summer’s Exercise Rim of the Pacific (RIMPAC), the world's largest naval warfare exercise.

The decision was finalized at a meeting earlier this month in San Diego that was attended by senior defence staff from Canada, the United States, Australia, Japan, New Zealand, South Korea and Singapore.

Two Canadian navy frigates from British Columbia – HMCS Vancouver and HMCS Winnipeg – will be accompanied by Cyclone helicopters, an Aurora patrol plane and a pair of coastal defence vessels, HMCS Brandon and HMCS Edmonton, at the exercise this summer off Hawaii and California.

The Department of National Defence says the ongoing war in Ukraine, which has drawn Canadian frigates from Halifax to Europe in support of NATO’s deterrence measures against Russia, will not affect scheduled naval training in the Pacific region.

"Our operational readiness management programs ensure the readiness of the CAF to conduct concurrent operations through participation in and execution of specific exercises and training events in Canada and internationally with allies and partners," Sabourin added.

The biennial RIMPAC exercise was last held in 2020, when Canada sent a smaller contingent than initially planned due to the restrictions of the COVID-19 pandemic. The exercise itself was scaled back to two weeks instead of the usual six, and was held exclusively at sea after the U.S. Navy cancelled the onshore training that had been a part of RIMPAC since its inception.

The 2022 exercise is expected to be a return to full-force interoperability training with approximately 25,000 military personnel, 41 ships, four submarines and more than 170 aircraft from 27 participating countries.

The list of participating countries likely will not be released until June when the exercise gets underway, according to a spokesperson for the U.S. Navy’s Third Fleet, which hosts the event.

The big question for many military watchers is whether the U.S. will invite Taiwan to the exercise for the first time, either as a participant or observer.

In December, U.S. President Joe Biden signed into law a defence spending bill that included a recommendation to conduct "practical training and military exercises with Taiwan, including, as appropriate, inviting Taiwan to participate in the Rim of the Pacific exercise conducted in 2022."

The invite was proposed by the U.S. Congress to counter "the increasingly coercive and aggressive behavior of the People’s Republic of China towards Taiwan," according to the National Defense Authorization Act.

RIMPAC began as an annual exercise in 1971 before it was moved to every two years due to its large size. Canada is one of the exercise’s founding countries, alongside the U.S. and Australia.

National Defence describes its participation in the warfare exercise as a key opportunity to build multinational relationships and strengthen peace and security in the Indo-Pacific region.