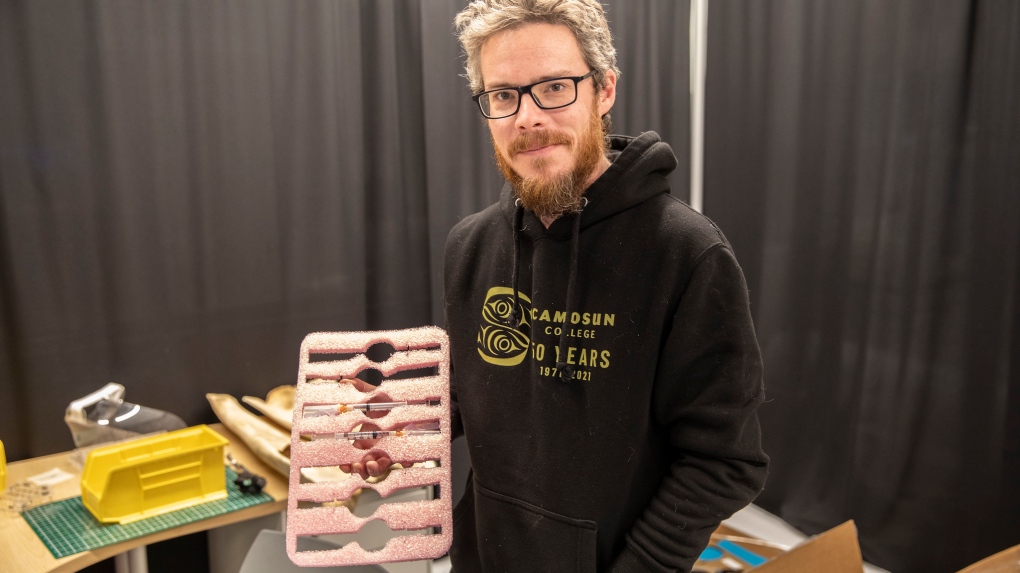 Vaccines are our best tool in the fight against COVID-19, health officials say, so Camosun College was given an important task from B.C.'s Centre for Disease Control (BCCDC) to protect them.

Working together, staff and students at the Greater Victorai college's applied research department, called 'Camosun Innovates,' had to come up with a way of transporting multiple loaded syringes containing COVID-19 vaccines without damaging them or causing their plungers to depress  along the way.

"When they are distributed, often what will happen is the syringes will get depressed in transit, and so once that happens, we’re not able to use those syringes," says Dr. Richard Gale, director at Camosun Innovates.

"So we wanted to create something that would keep the syringes stable in transit, but also make it possible for them to be refrigerated if need be."

It took 24 hours to come up with a design and 3 days to manufacture foam trays that will safely transport syringes containing a pre-drawn single dose of a COVID-19 vaccine.

The foam trays, made from a chemically-resistant polyethylene closed-cell foam, are manufactured using a commercial-grade laser cutter located in the Babcock Interaction Lab at the college’s Interurban Campus.

The specially-designed foam trays stop the doses from rolling around, or the accidental depression of the plunger while being transported.

"A number of vaccines are being distributed in pre-loaded syringes," says Gale. "What this will do is it will make it possible for single and double doses to go to remote communities when they only need a small amount of vaccines."

"It also makes it possible to then stack these for areas that are here in town," he says. "Perhaps you want to have a vaccine clinic here at a high school; this is a great way to move all of the vaccine syringes all together at the same time."

Each tray holds seven pre-drawn syringes and is designed to fit inside the standard portable cooler used by public health. On average, coolers used can hold up to 10 of the fully loaded trays, for approximately 70 syringes per cooler.

So far, Camosun Innovates has manufactured 200 foam trays at about a cost of $3 each, with more still to come.

The B.C. Centre for Disease Control distributes them to various health authorities as needed.

A man opened fire during a lunch reception at a Southern California church on Sunday before being stopped and hog-tied by parishioners in what a sheriff's official called an act of 'exceptional heroism and bravery.'

While the Red River is starting to recede in southern Manitoba, flood waters linger in communities and more than 2,000 people are still displaced.

Inquest to begin in N.B. police shooting of Indigenous woman during wellness check

The lawyer for the family of a British Columbia Indigenous woman fatally shot by police in Edmundston, N.B., during a wellness check two years ago said a coroner's inquest opening Monday offers a chance for her loved ones to get long-awaited answers.