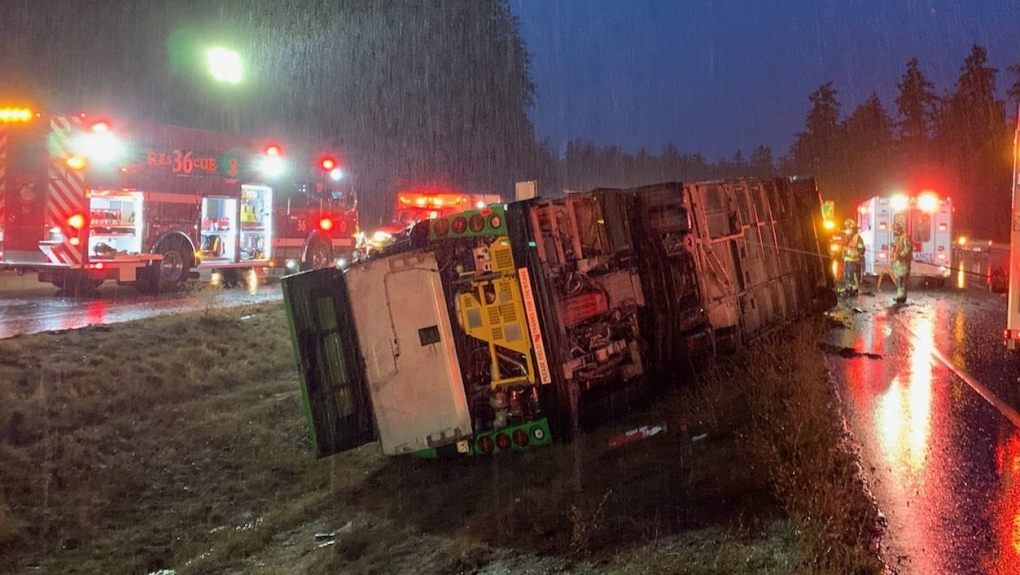 The crash occurred just before 6 a.m. Friday. No passengers were onboard at the time: (View Royal Fire Department)
Victoria -

A BC Transit driver was taken to hospital Friday morning following a single-vehicle rollover crash on the Trans Canada Highway in the West Shore.

According to BC Transit, no passengers were on the bus when the crash occurred just before 6 a.m.

The crash took place near the Thetis Lake, according to West Shore RCMP.

The View Royal Fire Department says the driver was pinned in the bus, and that firefighters needed to undertake a complex rescue to free them.

View Royal Fire Chief Paul Hurst says it took about 30 minutes to cut the driver free and extricate them.

The driver was then taken to hospital by ambulance for treatment of non-life-threatening injuries, according to West Shore RCMP. The bus was later towed from the scene around 8:45 a.m.

Mounties say an investigation into the crash is underway. While the investigation is in its early stages, police say the driver may have been trying to avoid a "possible hazard caused by another vehicle ahead," based on initial evidence gathered at the scene.

B.C. transit says that lengthy delays should be expected on at least 10 routes Friday morning due to the bus crash and other collisions in the region.

Mounties say that three other crashes occurred on Friday morning, including a crash between a vehicle and pedestrian, a three-vehicle collision, and a head-on collision that sent a driver to hospital.

"We are asking drivers, pedestrian and cyclists to spend some time getting ready to stay safe during wet weather," said Const. Alex Bérubé of the West Shore RCMP in a release Friday morning.