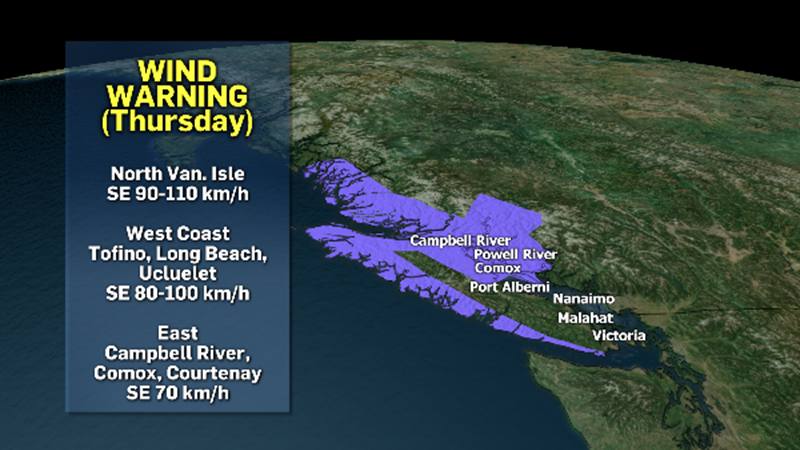 Most likely you weren’t tracking Typhoon Namtheun while it was churning in the western Pacific Ocean throughout the second week of October.

After all, that was happening hundreds of kilometres away and didn’t impact our days. It’s sure going to impact us now.

The remnants of this typhoon have been lingering off the coast and waiting to make a move. That move is being made and will deliver quite the punch for many parts of the West Coast as it develops into a powerful low-pressure system.

This rapidly intensifying low is a bomb cyclone.

You may be asking, what’s that? A bomb cyclone is a low-pressure system that drops its pressure 24 millibars or more in 24 hours or less. This particular system could double that pressure drop, which makes it a powerful and intense storm system.

Conditions will ramp up starting early Thursday in the overnight period.

Wind warnings have been issued by Environment and Climate Change Canada running through the day Thursday. North Vancouver Island and the southern region of the Central Coast should prepare for southeast winds steady in the 80-90 km/h range and gusting up to 110 km/h.

The west coast of the island, including Tofino, Long Beach and Ucluelet, will deal with steady southeast winds at 70-80 km/h and gusting to 100 km/h.

On the east coast, from Courtenay to Campbell River, southeast winds of 70 km/h are expected Thursday afternoon and overnight.

Obviously with the intense wind, a high surf is expected off Vancouver Island.

At the moment no high-surf warnings have been issued but that may change. The most intense winds are expected midday Thursday and will ease Thursday evening. High winds can toss loose objects and debris as well as topple large trees and power lines. 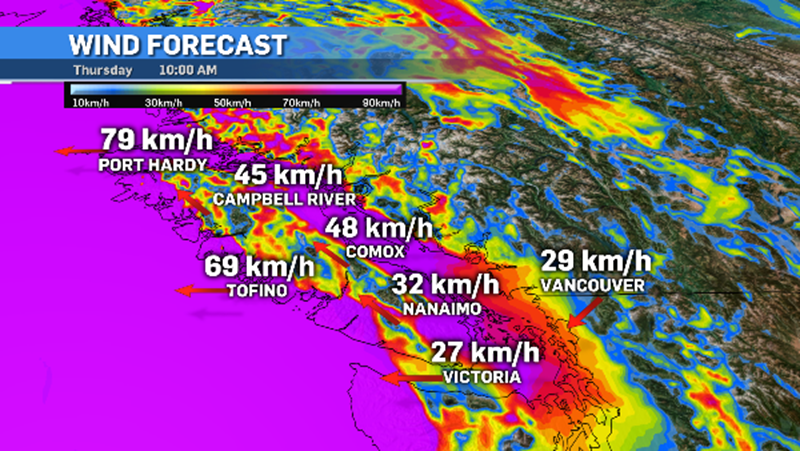 Along with all the wind will come rain.

If you were expecting a sunny and dry end to October, get ready to be disappointed. This system will be the lead for a steady parade of moisture over the next seven to 10 days.

The biggest rainfall totals can be expected on the island's west coast, inland and northeast regions. The potential for rainfall in excess of 100 millimetres is high with a consistent range of 60-90 millimetres expected from Thursday through Sunday.

So if you’re looking to lay blame somewhere you could shake your fist at Typhoon Namtheun or you could take a different approach and live by the words of Russian-American novelist and poet Vladimir Nabokov, “Do not be angry with the rain, it simply does not know how to fall upwards.”