BMW was travelling up to 200 km/h before Langford crash: RCMP

BMW was travelling up to 200 km/h before Langford crash: RCMP 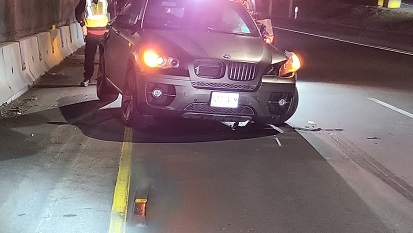 The crash happened around 7:40 p.m. Sunday, prompting the West Shore RCMP to respond to the northbound lanes of the highway near Leigh Road. (RCMP)

A 31-year-old driver has been charged with excessive speeding after investigators say he was travelling at upwards of 200 km/h when his BMW collided with another vehicle on the Trans-Canada Highway in Langford, B.C.

The crash happened around 7:40 p.m. Sunday, prompting the West Shore RCMP to respond to the northbound lanes of the highway near Leigh Road.

The vehicle slammed into a 2018 Hyundai Elantra and then slid approximately 450 metres before crashing into a concrete median.

Both vehicles were severely damaged, Mounties said in a release Monday.

Passengers in the Elantra were taken to hospital but there were no life-threatening injuries reported, police said.

"The driver of the BMW was charged under the Motor Vehicle Act for excessive speeding, which carries a $368 fine and three penalty points to your driver’s licence," said Cpl. Nancy Saggar of the West Shore RCMP. "Additionally, the vehicle was impounded for seven days."

The northbound lanes of the highway were closed for approximately an hour while crews worked to clear the scene, according to police.