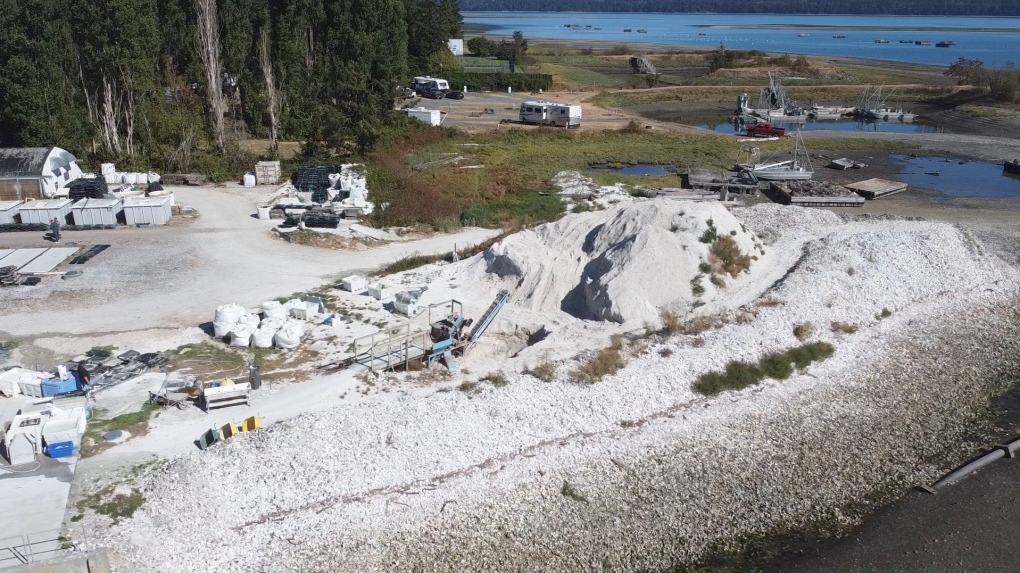 An oyster processor in Baynes Sound is filling a void created during the pandemic and generating new revenue from shells it used to send to the landfill. (CTV)

An oyster processor in Baynes Sound is filling a void created during the pandemic and generating new revenue from shells it used to send to the landfill.

Fanny Bay Oysters has been a constant in the area for decades, shucking product and – for the most part – simply disposing of mountains of empty shells.

“Before, we would actually pay to get rid of them, they’d go to waste, they used to get all the way to the landfill,” says the company’s quality assurance manager Jeff Armstrong.

Armstrong says the company began experimenting with leftover shells they had crushed, and was using them in growing new oysters. Soon, they were approached by landscapers wanting old shells for gardening, and then chicken farmers.

“We’ve had lots of interest," Armstrong says. "We’ve just found out that it’s a great way to produce extra calcium for chickens.”

Production is being ramped up to crush shells and turn them into feed, which will be used to increase chickens' calcium intake, making the shells on the eggs they lay harder.

“It’s great for the chickens because it’s a great product and they definitely need it, you can see the difference already in their shells,” says Hilary Benesh, owner of the Cat and Crow Farm.

Benesh says she was having difficulties getting oyster shells from her normal feed suppliers because of a shortage that began during the pandemic.

“When we didn’t have it, we asked them when it was going to become available and they didn’t know, and so we just had to sort of make do for a few months,” she says.

Benesh was surprised to learn there was no previous supplier for the oyster shells.

“There’s so many different oyster farms on the island, and you see the oyster shells laying about everywhere. I figured, of course, it would be easy for us to keep up the supply, but when the feed stores had the shortage it made me question, 'Where is it actually coming from?'” she says.

In addition to the chicken feed, which Fanny Bay Oysters is making available through Buckerfields, the company thinks there could also be a future in providing products such as oyster flour for covering driveways, parking lots and bocce ball courts.

“It was great to see it go from a potential waste to something that’s useful almost everywhere,” Armstrong says.

Police have released a video of a driver who smashed a vehicle through the doors of Vaughan, Ont. mall early Wednesday before allegedly breaking into an electronics store.

The federal government is expected to introduce a law as early as Thursday to delay the extension of medically assisted dying eligibility to people whose sole underlying condition is a mental disorder.