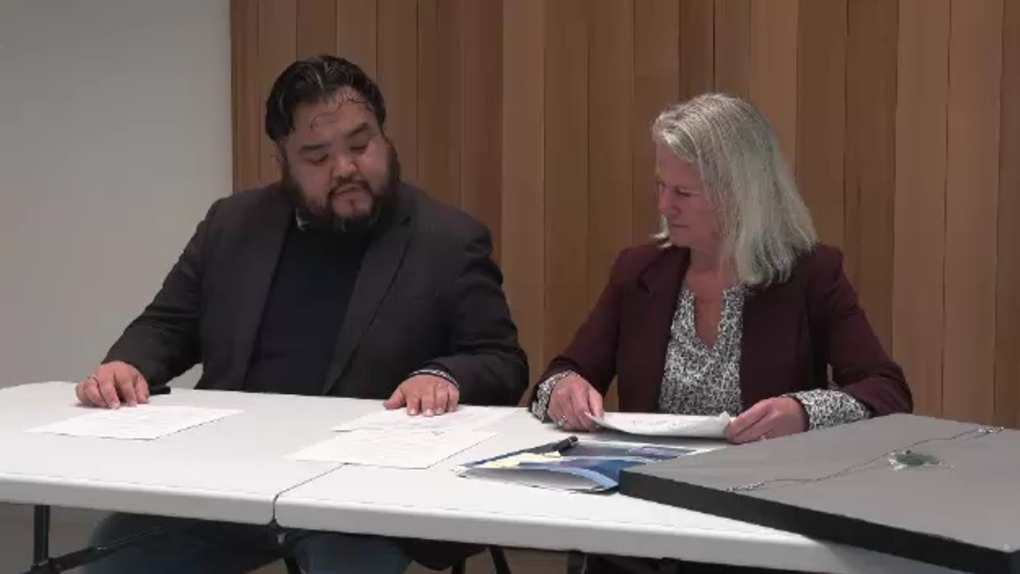 On Friday, BC Ferries signed a protocol agreement with the Tsartlip First Nation of Vancouver Island, clearing a way for reconciliation.

The agreement will establish a framework on areas of mutual interest as the corporation operates 11 terminals within the territory of the Tsartlip people.

The agreement was signed by Chief Don Tom and interim BC Ferries president and CEO Jill Sharland, after a ceremony led by elder Tom Sampson was held in the Tsartlip Health Office building.

"When you’re operating within our territories I think it requires a degree of acknowledgement, and to agree to work with the First Nations," said Tom.

"This is a relationship we’ve been striving for. We’re happy we’re able to sit here with BC Ferries and sign this protocol agreement today," he said.

BC Ferries operates within the territories of 80 First Nations in the province and signed its first protocol agreement with Snuneymuxw First Nation in July.

"We are open to any other agreements that any First Nations wants to work with us on," said Sharland.

"We want to work to together for the best of everybody and we’re very positive on the work we’ve done so far," she said.

Tom agrees this is a positive step forward between the Tsartlip Frist Nation and BC Ferries, following what he describes as a strained relationship.

He said he is looking to address BC Ferries' racist past when the organization prevented Indigenous passengers from being on the upper deck of vessels.

"We want to have discussions about this and we want to reconcile this," said Tom.

The agreement has a several shared goals and initial topics to be addressed:

"It’s important for BC Ferries, and really for all of Canada, to work on reconciliation opportunities for us to move in a positive way forward," said Sharland.

"Working together is this way, we can actually reconcile and move our organization and the country forward in a positive way," she said.

Authorities in Western Australia on Wednesday recovered a tiny but dangerous radioactive capsule that fell off a truck while being transported along a 1,400-kilometer (870-mile) Outback highway last month in what an official said was like finding the needle in the haystack.

A new report from the Heart and Stroke Foundation of Canada is highlighting 'significant inequities' in women's health care that is disproportionately affecting racialized and Indigenous women, members of the LGBTQ2S+ community and those living with low socioeconomic status.

Andrew Tate, the divisive influencer and former professional kickboxer who is detained in Romania on suspicion of organized crime and human trafficking appeared at a court in Bucharest on Wednesday to appeal against a second 30-day extension of his detention.

The backlog of airline complaints to the Canadian Transportation Agency since December's travel chaos balloons by thousands, a Conservative MP raises concerns over the government's quarantine hotel spending, and a Toronto man raises money for charity after spending 24 hours in a diner due to a lost bet. Here's what you need to know to start your day.