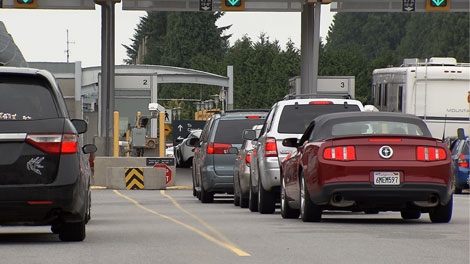 BC Ferries transported 108,000 vehicles from Thursday to Monday, setting a record for the Victoria Day long weekend and beating the previous record of 105,000 vehicles set in 2018. (CTV News)

BC Ferries saw no staff-related service disruptions over the Victoria Day long weekend, even as it carried a record number of vehicles, according to its president and CEO.

Crew-related delays and cancellations have plagued the ferry service for months as it coped with a shortage of workers.

President Mark Collins says BC Ferries has hired more than 850 new employees since January, including 500 people in the last six weeks, mostly to junior positions.

"We are still struggling to find licensed experienced officers," Collins said, noting the shortage of experienced mariners is a worldwide issue and has been for years.

Collins says the ferry service transported 108,000 vehicles from Thursday to Monday, setting a record for the Victoria Day long weekend and beating the previous record of 105,000 vehicles set in 2018.

"Vehicles are exceeding pre-pandemic [levels]," Collins told CFAX 1070 on Thursday, adding that passenger numbers were lower but "not far off" pre-pandemic levels.

Nearly 300,000 people travelled aboard a ferries vessel over the long weekend, when the company added 110 extra sailings to cope with the anticipated demand.

The ferries president said all signs indicate a busy travel summer for BC Ferries, noting August is the peak travel month for the company.

"We're pulling out all the stops to make sure we're ready for a big summer in British Columbia," Collins said.