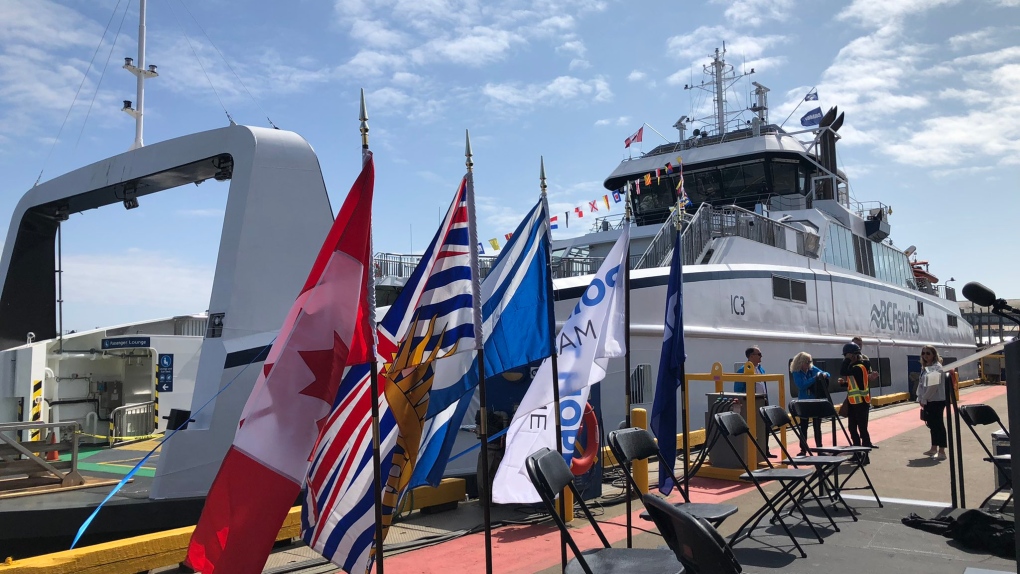 The new Island-class vessels were officially christened the Island K’ulut’a and the Island Nagalis during a ceremony at Victoria’s Point Hope Maritime shipyard on Monday, Aug. 23, 2021. (BC Ferries)
Victoria -

The new Island-class vessels were officially christened the Island K'ulut'a and the Island Nagalis during a ceremony at Victoria’s Point Hope Maritime shipyard.

BC Ferries says it chose the names after a community engagement process.

Both ferries are expected to enter service next year along the Campbell River-Quadra Island route. They are the latest additions to the ferry service’s fleet of Island-class hybrid-electric ships.

“The names celebrate the important connection to some of the coastal communities the ferries will serve,” the ferry service said in a statement Monday.

“In both Kwak̓wala and Lik̓wala, two of the Kwakwaka'wakw dialects, Nagalis means ‘dawn on the land’ and K'ulut'a is the name for porpoise,” the company added.

We name this ship Island Nagalis– may she bring fair winds and good fortune to all who sail on her. pic.twitter.com/8VgfzNg1IC

BC Ferries says it will commission original artwork from Indigenous artists for the interior of the new vessels.

The art is expected to recognize Indigenous peoples as stewards and original mariners of B.C.’s coastal waterways, the company said.

The ferry service is partnering with the First Peoples’ Cultural Council to hold an open call to artists to select the work. Further details on the selection process will be announced in the fall, according to the company.

We name this ship Island K’ulut’a – may she bring fair winds and good fortune to all who sail on her. pic.twitter.com/Fo8ZdFNJVK

All six Island-class ferries will be capable of running fully electric if and when shore power infrastructure is installed.

The new ferries will have the capacity to carry 47 vehicles and up to 400 passengers and crew.

A growing number of Canadian hospitals are enacting policies requiring visitors and care partners to show proof of vaccination in order to gain entry, sparking yet another pandemic-era debate for ethicists.

Missionary group confirms kidnapping of one Canadian, 16 Americans in Haiti

A Canadian was among 17 missionaries allegedly kidnapped in Haiti on Saturday, Christian Aid Ministries said in a statement on its website.

COVID-19 vaccine booster eligibility by province and territory in Canada

Although booster shots and third doses of COVID-19 vaccines aren't currently recommended for most Canadians, additional doses are being made available to certain populations or those who need to travel for work based on their province or territory of residence.

A rescue mission got underway Sunday for a firefighter who fell into the St. Lawrence River after a boat carrying people from a previous rescue mission capsized near the Lachine Rapids.

Gov. Gen. Mary May Simon set out on her first international trip in that position on Sunday, heading to Germany to meet with officials, as well as attend the world’s largest trade book fair.

Hayley Wickenheiser is a six-time Olympian and award-winning women's hockey player, and now her accomplishments include graduating from medical school and achieving an M.D. during a global pandemic.

A day at the beach turned into a proposal for Kourtney Kardashian, who is now engaged to Blink-182 drummer Travis Barker.

Having trouble sleeping was commonplace for people with mental illness, according to one of the largest studies of its kind conducted by researchers at the Centre for Addiction and Mental Health.