A cement barge that washed onto the coast of Esquimalt, B.C., is still stuck there on Thursday, two days after it ran aground.

The cement barge broke free of its tow cable and smashed onto the rocks of MacLoughlin Point on Tuesday night during a windstorm, which cancelled BC Ferries sailings in the region.

Since then, the wayward barge has drawn onlookers.

"There was a loud bang. I heard it, the kids heard it, everybody heard it," said an Esquimalt resident on Wednesday.

Fortunately, Transport Canada says there were no injuries in the crash and that the trapped barge is relatively harmless.

"The barge is empty, with no fuel or people on board, and poses no threat to people's safety or the marine environment," said Transport Canada spokesperson Sau Sau Liu in a statement Thursday.

Recovery efforts began on Wednesday, but as of Thursday afternoon, the barge was still stuck at MacLoughlin Point. 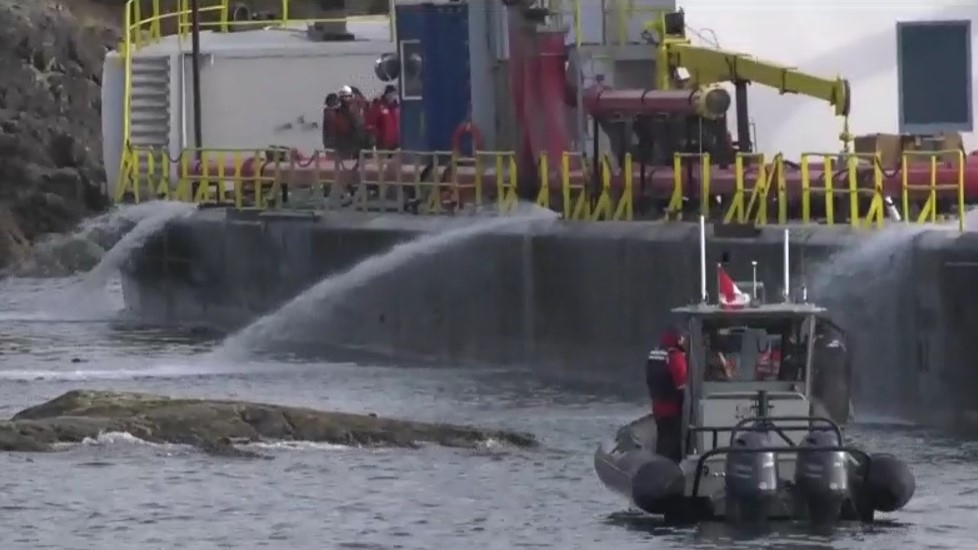 The trapped barge is pictured on Nov. 30. 2022. (CTV News)It's unclear when the barge will finally be freed, but Transport Canada says it's working with the barge owner to carry out a safe recovery of the vessel.

CTV News reached out to the company that owns the barge, Lafarge Canada, on Wednesday but did not receive a response.

Either way, locals say they don't want have to wait like Vancouverites did when a barge was stuck along the rocks of English Bay for nearly a year.