B.C. woman acquitted of failing to provide breath sample because police did not make demand 'immediately'

B.C. woman acquitted of failing to provide breath sample because police did not make demand 'immediately' 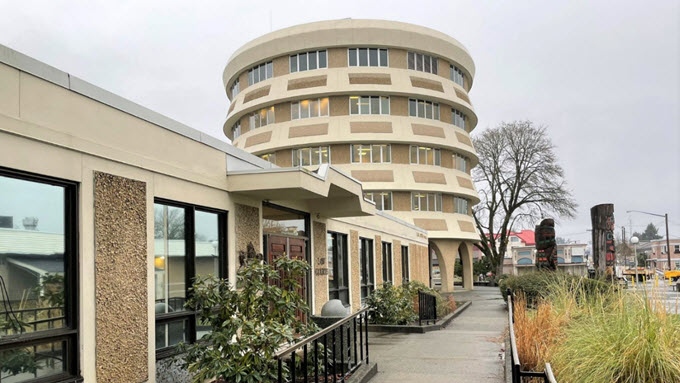 The outside of the courthouse in Duncan, B.C. (Paul Doroshenko/Provincial Court of British Columbia)

A B.C. judge has acquitted a Vancouver Island woman of failing to provide a breath sample because police waited several minutes before asking her to blow into an alcohol-screening device after they suspected she was impaired.

The judge also found "obvious inconsistencies in the police evidence" in the case prior to ruling the officers' delay in demanding the breath sample meant the woman was no longer legally obliged to provide it.

In a decision handed down last week, provincial court judge Ted Gouge acquitted Joanna Brooker, of Duncan, B.C., of failing to provide a breath sample because the Criminal Code requires such a demand be made "immediately" after police have sufficient evidence to suspect someone was driving while impaired.

The judge tossed out the charge when he found that upwards of 10 minutes had passed between when the officers had sufficient grounds to demand a breath sample and when the demand was actually made.

REPORT OF AN IMPAIRED DRIVER

According to the decision, RCMP Const. Mongraw was on patrol near Chemainus, B.C., on Jan. 8, 2020 when the radio dispatcher informed her of an incident at a nearby pub.

Staff at the pub had reportedly refused to serve alcohol to a woman because she appeared intoxicated. The woman allegedly got back in her car and drove away, but not before someone took down her description and licence plate number.

The dispatcher provided the vehicle's registered address to Mongraw, who drove to the home and found the vehicle in the driveway with its interior lights still on, she testified.

The officer knocked on the front door and was answered by Brooker and a man who were arguing, she said. The woman had red, glassy eyes and a strong smell of alcohol on her breath, she said.

Another police officer, RCMP Const. Wreggitt, testified that he arrived at the home and found Mongraw speaking with the man and Brooker, with whom he had previous dealings.

Wreggitt also observed that Brooker had red, glassy eyes and smelled strongly of alcohol, according to his submissions to the court.

When Brooker told the police she was unwilling to speak with them further and was going back into the home, Wreggitt told her she was being detained for an impaired driving investigation and the two officers escorted her into the backseat of Wreggitt's police car.

Mongraw then went back to the door and spoke with the man, who told her Brooker came home intoxicated, according to the officer's testimony. Mongraw estimated the conversation lasted nine minutes.

However, the man testified in Brooker's defence and denied telling police Brooker was intoxicated when she got home. He instead testified that Brooker was drinking vodka at the house before he got home and he did not know whether or not she was sober when she arrived home.

When Mongraw asked Brooker for a breath sample, she refused and asked to speak with a lawyer, according to the police testimony. Mongraw then told her she was under arrest for refusing to provide the sample.

'I AM OBLIGED TO ACQUIT HER'

The judge ruled that Mongraw had reasonable grounds to demand a breath sample as soon as she spoke to Brooker at the front door, given that she had the report from the pub, including a description of the woman and the vehicle, and could smell alcohol on the woman's breath.

"Those facts were sufficient to entitle Const. Mongraw to make a breath demand," the judge wrote.

Because Mongraw did not have access to an alcohol-screening device until Wreggitt arrived with one, the demand for a breath sample "should have been made as soon as Const. Wreggitt arrived," the judge found.

Instead, the estimated nine or 10 minutes that passed while Brooker waited in the police vehicle before the demand for a breath test was given was more than was reasonably necessary, the judge found.

"I conclude that the demand in this case was not made 'immediately,' and that Ms. Brooker was not legally obliged to comply with it," the judge wrote. "For that reason, I am obliged to acquit her."