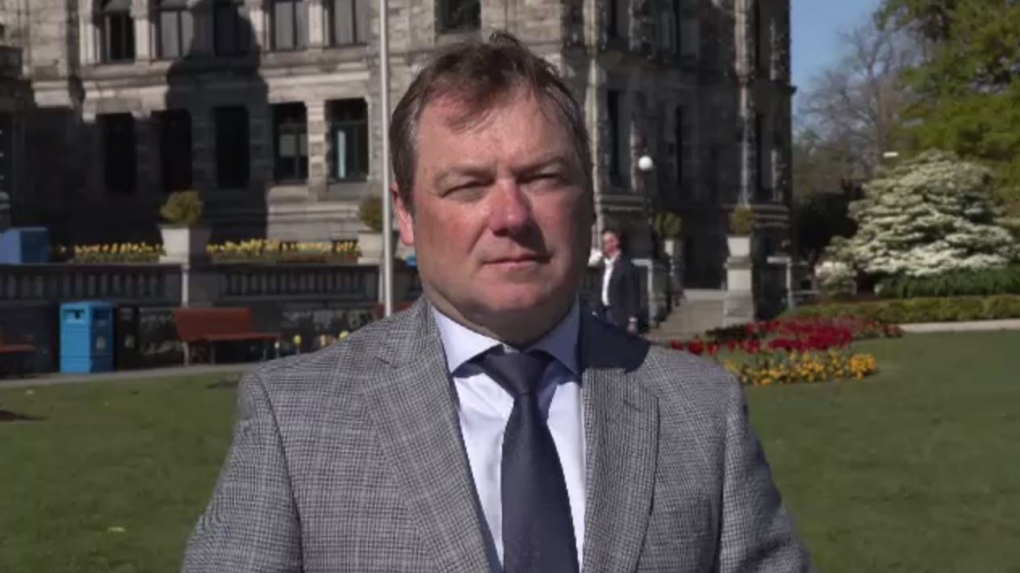 Rick Barnum, executive director of the National Coalition Against Contraband Tobacco, at the B.C. legislature in Victoria on May 19, 2022. (CTV News)

Higher taxes on cigarettes in British Columbia will push more smokers to buy tobacco on the black market and fund organized crime across the province, according to the National Coalition Against Contraband Tobacco.

Rick Barnum, executive director of the coalition, was at the B.C. legislature in Victoria on Thursday to say the province's plan to increase tobacco taxes this summer will put more money in the hands of drug dealers and human traffickers.

"We are here today due to a growth in contraband tobacco in the province," Barnum said. "Through my 30-year career with the Ontario Provincial Police, I know firsthand what criminal gangs can do to a community if they are allowed to establish themselves."

The group says B.C.'s plan to raise cigarette taxes by seven per cent on July 1 will contribute to a 36 per cent increase in tobacco taxes since 2018 when combined with other provincial and federal increases.

"Illegal cigarettes are becoming more common in the province, and are helping to grow other illicit trades, such as illegal cannabis, cocaine, fentanyl, handguns, and even human trafficking."

The difference in price between a legal carton of cigarettes and an illegal carton is more than $100, according to the group. That's bringing "millions of illegal cigarettes" into the province from criminal gangs in Ontario, Barnum said.

The group is calling on the province to create a dedicated contraband tobacco enforcement team to tackle the issue.

Not everyone agrees with the coalition's assessment of the effects of taxes on cigarettes in British Columbia.

"The B.C. government deserves praise for increasing tobacco taxes as a crucial means to improve public health and reduce cancer," said Rob Cunningham, a senior policy analyst with the cancer society in a statement.

"B.C. has in place among the strongest tobacco contraband prevention systems of any province in Canada," he added.

Over a three-month period in 2019, the province seized 1.5 million grams of illegal tobacco destined for the Lower Mainland, according to the Ministry of Finance.

One scandal too many: British PM Boris Johnson resigns

Prime Minister Boris Johnson announced his resignation Thursday amid a mass revolt by top members of his government, marking an end to three tumultuous years in power in which he brazenly bent and sometimes broke the rules of British politics.

A Quebec man who fell and broke his jaw, cheekbone and a bone around his left eye while visiting British Columbia says his surgery was cancelled after he was told his home province “won't pay” for the procedure.

Dozens of people have been displaced after an intense, third-alarm fire on Vancouver's Downtown Eastside Wednesday night.

As concerns grow that Canada's red-hot real estate market may be starting to cool, one real estate agent in Toronto says that some homeowners in the city are becoming increasingly 'desperate to sell right now.'

How to find cheaper flights this year as airfares soar

For those who remain undeterred by the daunting lines and flight delays at Canadian airports, questions remain about how to save money on air travel amid mounting fuel costs and inflation.