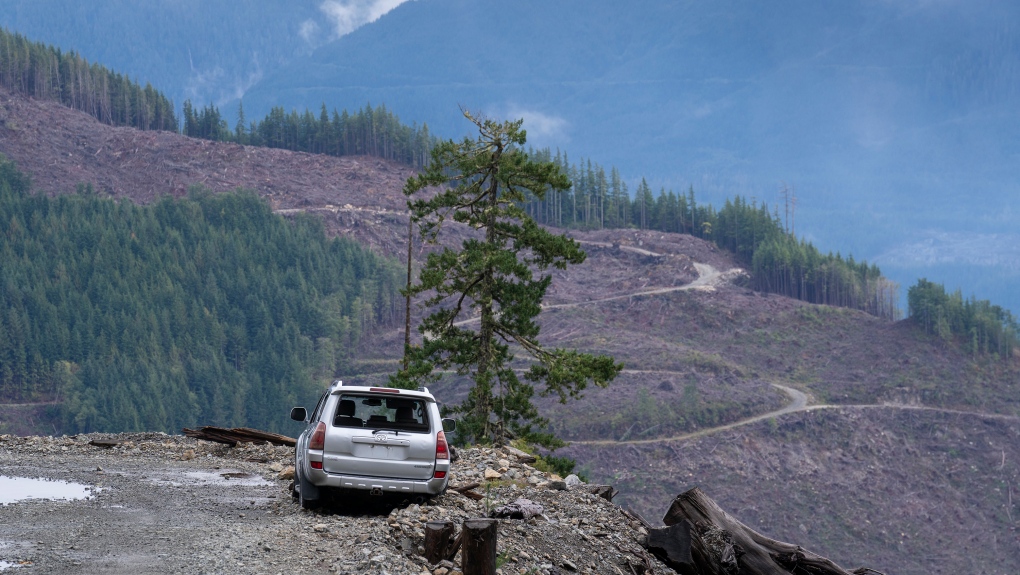 The remains of a cut block is seen in the background with a destroyed car in the foreground in the Fairy Creek logging area near Port Renfrew, B.C. on Tuesday, Oct. 5, 2021. THE CANADIAN PRESS/Jonathan Hayward

The British Columbia government says old-growth logging has fallen to historic lows in the province, but one conservation group says the government continues to hide where that logging is happening.

"The latest numbers show that B.C. is on the right track as we work to develop and implement new long-term solutions for better managing, preserving and sharing the benefits of our forests," B.C. Forests Minister Katrine Conroy said.

The statement came exactly one year since the province released the findings of its technical advisory panel on old growth, which identified four million hectares of old-growth forests at highest risk of biodiversity loss.

The province says its figures show that only 0.23 per cent of that priority at-risk old growth was logged last year, and that 80 per cent of the at-risk forests are already either permanently protected, covered by recent deferrals or not economically viable to harvest.

But the Wilderness Committee conservation group says the government is failing to disclose data about where old-growth logging was deferred and where it continues.

"The NDP government has been asked repeatedly to tell the public where old-growth logging is taking place, and they’ve refused, instead providing misleading updates like the one we got yesterday," Wilderness Committee spokesperson Torrance Coste said in a statement Thursday.

"At the end of the day, there are only two numbers that matter: the amount of planned logging in threatened old-growth forests that’s gone ahead, and the amount that’s been stopped."

'TOTAL SLAP IN THE FACE'

The group says its own independent mapping and on-the-ground analysis over the past year has confirmed that logging continues in thousands of hectares of at-risk old-growth forests in the province.

"We spent the summer driving out to sites where logging plans overlap with at-risk forests the government has said it intends to defer," Coste said.

"In almost every instance, we found massive clearcuts filled with giant stumps. This is the destruction that's driven so much conflict on this issue, and the evidence out on the land obliterates the NDP's claims that it’s doing any better."

When the province released the work of its technical advisory panel last November, the government announced it would work with First Nations to defer logging within 2.6 million hectares of the most at-risk old growth.

The Wilderness Committee is calling on B.C.'s incoming premier to direct his government to provide maps or specific details about which old-growth forests have been protected.

"David Eby needs to get up to speed here and get his government back on track," said Coste.

"Releasing logging numbers without specific information about the status of the old-growth that’s being destroyed is a total slap in the face at this point," he added. "What was the purpose of having a technical panel determine which forests are most at risk if the government now ignores that information when reporting on old-growth logging?"

The B.C. Forests Ministry responded Thursday, saying it would not disclose which old-growth areas are deferred or not deferred because doing so would breach confidential agreements with First Nations without their consent.

The government says it is working with First Nations toward a new strategic action plan on old growth that will be completed by the end of 2023.

Depending on the type of forest, the province defines an old-growth tree as one that is more than 250 years old in coastal areas, and more than 140 to 250 years in the B.C. Interior.