Stakeholders are sharing their expertise on the use of police dogs in B.C., weighing the benefits they offer police with the injuries they can inflict.

From tearing arteries to pulling people’s ears from their scalps, police dogs can inflict brutal damage, according to advocates.

"And then of course, emotional scars and trauma… from a very disturbing use of force," she said.

Mannoe works with the family of Jared Lowndes, a Wet'suwet'en man shot and killed by Campbell River RCMP in July. Officers boxed in his vehicle and deployed a police service dog, which RCMP said he stabbed fatally.

"I have been, and continue to be, against the use of dogs to inflict pain and punishment on people," Lowndes’ mother, Laura Holland, wrote in an email to CTV News.

"[Dog bites] should be considered just below a lethal use of force and that should dictate how and when they’re involved in policing," she said.

"Make no mistake about it, this is a minimal force concept. We don’t want to bite these subjects," Ewer told CTV News.

"[Dog handlers] go through that checklist: Is the public at risk? Are the police at risk? Is the subject at risk?"

He said dogs are a key resource for protecting the public and police and for supporting officers on the front lines.

"We could be tracking a violent suspect from a robbery… in the morning and in the afternoon we could be searching for a missing dementia patient," he said.

"It’s important to always consider how we could do it better," Leamon said.

"[But] I don’t think that just because there are complaints or lawsuits that involve the use of police dogs that police dogs should be retired altogether."

HUNDREDS OF BITES EACH YEAR

Victoria and Saanich’s Integrated Canine Service dogs were deployed 399 times in 2021, for calls from bomb sweeps to evidence searches. They were key contributors in the arrests of 86 people, biting 12 of them, Ewer said.

Province-wide, hundreds of bites are recorded each year. B.C. RCMP and its Lower Mainland Integrated Police Dog Services reported 193 bites in 2019. That same year, Vancouver police recorded 109 bites, according to the most recent data reported to B.C.’s police services director.

From April to the end of December, the Independent Investigations Office (IIO) has investigated seven serious injuries linked to K9s, up from zero in 2018/19. 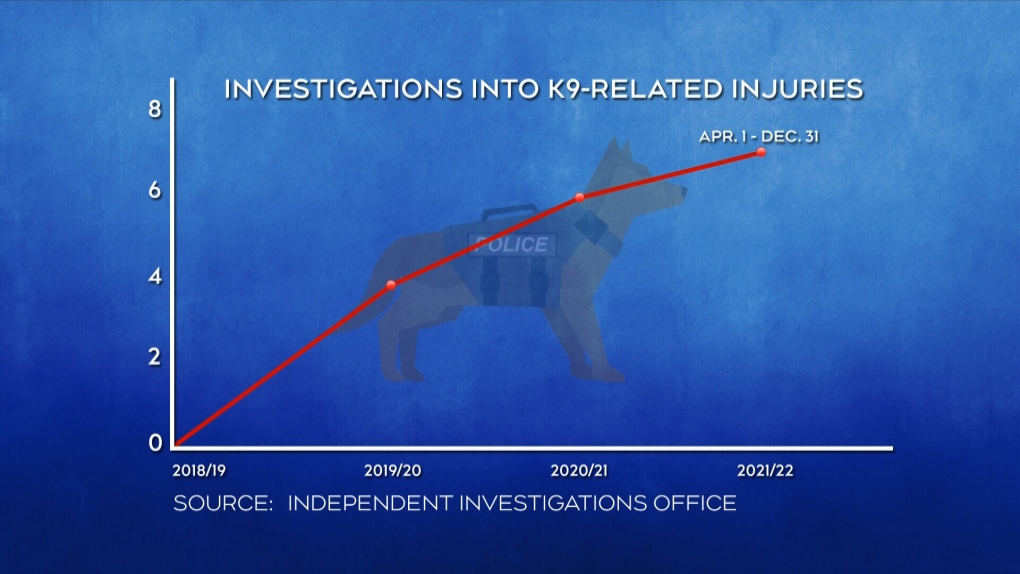 More analysis is needed to determine why those numbers are on the rise, he said.

"Generally, we find that the use of force is warranted. Most often… it’s circumstances where the individual was presenting a risk of bodily harm," he said.

At the Office of the Police Complaint Commissioner (OPCC), bites are trending in the opposite direction.

Generally, the OPCC records more injuries from dog bites than any other type of force, so the deputy police complaint commissioner said this is a good sign.

"At the OPCC, we’re looking to be able to take a deeper dive into those statistics … to determine [if there are] any broader trends," Andrea Spindler said. Municipal police are required to report to the OPCC all injuries where someone requires emergency care and transfer to hospital. (CTV News)

Complainants have flagged concerns that they already surrendered or there wasn’t ample warning before a dog was deployed, she said.

"Because it is a valuable tool for police to use, it’s not something that we’re looking to take away, but really making sure that it’s an accountable tool," Spindler said.

MacDonald said B.C. has some of the strongest policing standards in Canada. Still, he plans to recommend tweaks to the province’s police services director, former Mountie Wayne Rideout.

The policing standards say K9s can bite when someone is at risk of bodily harm or if a person of interest is fleeing or hiding.

"If the person is escaping from an offence that doesn’t pose a risk of harm to anybody, I think police service dogs should not be used to apprehend," MacDonald said. "That advice needs to be more specific."

The standards say handlers must have reasonable grounds to deploy their dog, considering the seriousness of an offence.

Pivot Legal Society is also calling for mandatory tracking of race-based data, to determine whether racialized people are disproportionately bitten by police dogs.

"I don’t see any commitment from the provincial government around minimizing or eliminating injuries that result from police service dogs," she said.