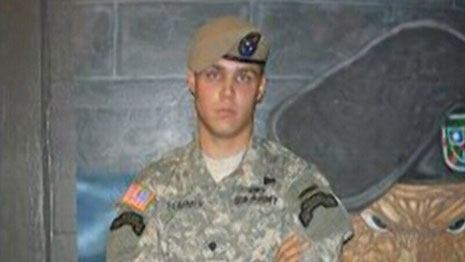 Luke Elliott Sommer, a former U.S. Army Ranger from B.C., tried to arrange a hit on a U.S. attorney only months after he was sentenced to 24 years in prison for leading a bank robbery in Tacoma, Wash. (Supplied)

A British Columbia man who led a "military-style" bank robbery and later tried to hire someone to murder a U.S. federal prosecutor has won a reduced prison sentence due his age at the time of the crimes and his behaviour while incarcerated, according to the U.S. attorney's office in Seattle.

Luke Elliott Sommer, 36, successfully petitioned a U.S. district judge Wednesday to reduce his 43-year sentence to 31 years, despite the judge characterizing his crimes as "some of the most extreme, violent and dangerous actions to come before this court."

The U.S. Attorney’s Office for the Western District of Washington described Sommer in a news release as the mastermind of an August 2006 robbery at a Bank of America branch in Tacoma, Wash.

Five men, including Sommer, carried out the robbery. Two were armed with fully automatic AK-47 rifles, while Sommer and another carried semi-automatic handguns. All wore body armour and carried hundreds of rounds of ammunition in the event of a shootout with police, according to the attorney's office.

Sommer, then 20 years old, planned to use the proceeds of the robbery to start a criminal gang in B.C. that would rival the Hell's Angels.

'I WILL NEVER BE THE SAME'

A dual citizen of Canada and the U.S., Sommer is a former U.S. Army Ranger who served tours in Iraq and Afghanistan. He plotted the robbery with fellow British Columbians Tigra Robertson and Nathan Dunmall, and fellow Army Rangers Chad Palmer and Alex Blum.

"If the police arrived, Luke Sommer planned to go to war," the proseuctor said at the sentencing of one of his co-defendants. "The robbers were armed for combat."

The men made off with more than US$50,000 but were later tracked down when their car was traced to their military barracks.

Three victims of the robbery told a Seattle court Wednesday that they suffered post-traumatic stress and anxiety in the wake of the crime. The former branch manager described the shock of seeing the red dot of Sommer’s laser site pointed at her bank teller employees.

"The staff was never the same, I will never be the same," the manager said.

Barely a month later, he offered an FBI informant US$20,000 to murder the assistant U.S. attorney who convicted him, telling the would-be hitman he wanted the death to appear as a "murder, not an accident," according to the attorney's office.

The attempt to hire a hitman, as well as a knife assault on one of his co-defendants while incarcerated, would earn Sommer an additional 20-year sentence.

On Wednesday, U.S. Attorney Nick Brown said Sommer expressed remorse for his crimes and told the court and his victims that years of incarceration had changed him.

"He claims to be committed to working on his reform and doing what is right," Brown said in the release. "He now has more than a decade to demonstrate that commitment while he remains incarcerated."

In reducing Sommer's sentence, the judge noted that "punishment is not vengeance or retaliation," adding he had arrived at his decision after considering letters from U.S. Bureau of Prisons staff who wrote that Sommer had "worked hard to do the right thing while incarcerated."