B.C. man among trio charged after $7M in drugs found on U.S. beach

B.C. man among trio charged after $7M in drugs found on U.S. beach 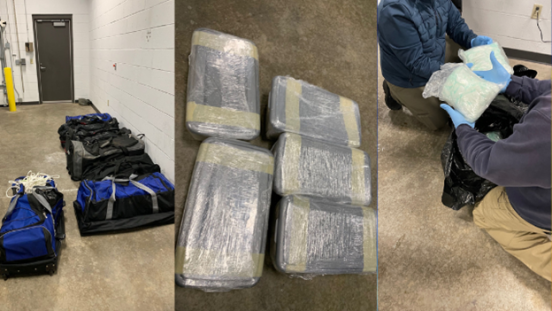 Two Americans and one British Columbian are facing possible life sentences in U.S. prison after beachcombers discovered more than 180 kilograms of methamphetamine and fentanyl stuffed into duffel bags on the Washington state shoreline.

Federal prosecutors say the drugs were bound for Canada in a failed smuggling attempt.

Kevin Christopher Gartry, 45, is the lone Canadian charged among the trio, which includes Erika A. Bocelle, 32, of Rhode Island and John Michael Sherwood, 65, of Idaho.

All three defendants are already in U.S. custody on unrelated charges.

Due to the large quantity of drugs involved in the case, the defendants face a mandatory minimum sentence of 10 years to life in prison, according to the U.S. attorney's office for the western district of Washington.

Beachcombers near Port Angeles, Wash., discovered a single black duffel bag containing what appeared to be drugs on April 7, 2021.

They reported the find to the local sheriff's office, which determined the bag contained approximately 27 kilograms of methamphetamine and one kilogram of fentanyl powder, according to the U.S. attorney's office.

Four days later, another beach walker in the same area – approximately 20 kilometres across the Strait of Juan de Fuca from the southern tip of Vancouver Island – found seven more duffel bags on the shoreline. Investigators determined the bags contained 155 kilograms of meth.

The Clallam County Sheriff's Office in Port Angeles estimated the total value of the drugs at US$7 million.

The grand jury indictment was delivered after an extensive investigation by the FBI, the U.S. Department of Homeland Security, U.S. Customs and Border Protection and the RCMP, according to the U.S. attorney's office

The charges have not been tested or proven in court.

February's full snow moon will light up the sky over the next two nights, with the spectacle reaching full illumination on Sunday morning. But this year’s full moon will be smaller than those of recent years. It’s called a “micromoon.”