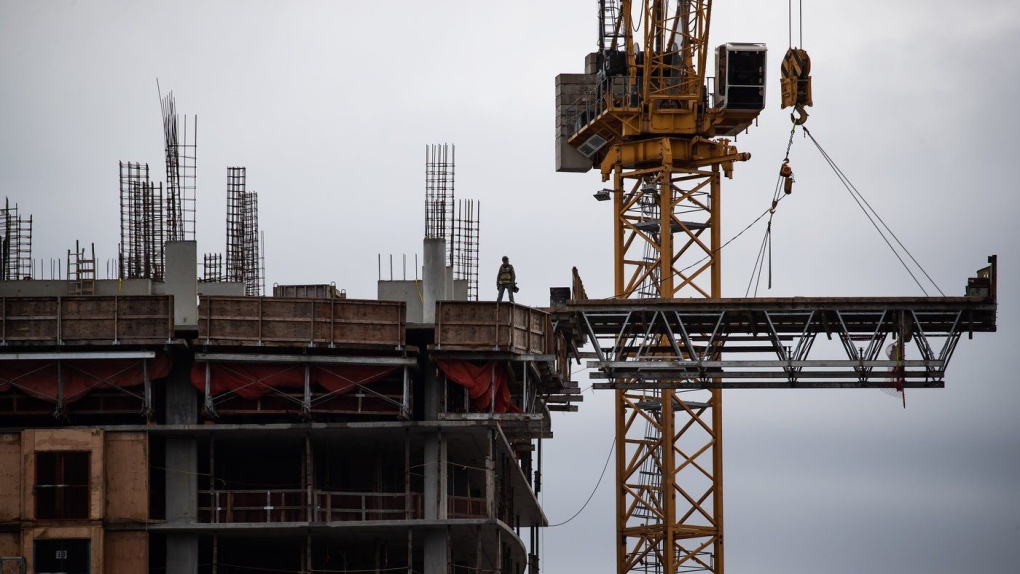 A tradesperson stands atop a condo tower under construction, in Burnaby, B.C., on Wednesday, March 2, 2022. (THE CANADIAN PRESS/Darryl Dyck)
Vancouver -

Demand for housing in British Columbia still far outstrips supply, experts say, even as the latest census figures show growth in the number of homes was higher than the increase in population countrywide.

Statistics Canada reported Wednesday that growth in apartments in a building with five or more storeys has far outpaced other types of dwellings across the country, though single-family homes remain the dominant form, making up about half of all dwellings.

Across Canada, there are nearly 1.6 million apartments in buildings with five or more storeys, or 10.7 per cent of all homes, up from 9.9 per cent in 2016.

Andy Yan, director of the City Program at Simon Fraser University, expected the rise of the condominium. He said he expected the trend of young people being unable to “climb the property ladder” to continue, largely due to land space and price.

“Everything is expensive now,” Yan said. “(Millennials) may not be able to afford the cost of land, but want to purchase something, so it mostly comes in the form of a condo.”

Nathanael Lauster, associate professor of sociology at the University of British Columbia, said housing is a “major barrier to growth,” but also noted that the census does not measure demand or need.

Leo Spalteholz, a housing analyst at Homes for Living, a group of community volunteers trying to make Greater Victoria more affordable for renters and owners, noted the influx of people moving to Canada's coasts during the pandemic also boosted competition in the real estate market.

“It doesn't take a lot of people arriving to overwhelm the housing. Even before the pandemic hit, inventories of properties for sale in Canada were actually quite low and then suddenly, we had these people moving.”

Statistics released by the B.C. Jobs Ministry earlier this month show more than 100,000 people moved to the province in 2021, the highest annual total since 1961.

Aliya Griffin, 38, has lived in the same basement suite apartment in East Vancouver since 2010. She said her landlords sold the property and the new homeowners served her a two-month eviction notice, claiming a family member was planning to move in. Griffin said she was “blindsided” by the news she has to move out in June.

“The rent was very reasonable and now we're looking at a market that is double or more what we pay now for less than what we have now,” she said. “It's pretty scary, honestly. I've never been in this position before.”

She said she had been paying $984 a month before her husband moved in and the rent increased to $1,025. She said they may now be forced to move outside the city.

“I'm one of those people that did everything right. I have no debt, I went to school, I got a decent job, and I'm in this position because rents have gone up so much faster than salaries,” she said.

“Home ownership for my generation, without supportive and super wealthy parents, is just impossible.”

Spalteholz said he expected surging population growth across the province, not only in urban centres like Vancouver.

“Some of these smaller markets just got completely swamped with new arrivals and just kind of put the market into crisis mode on both the rental and the end of the house prices side of things.”

A trend report from the Vancouver Island Economic Alliance found that between 2014 and 2021, more than 89,000 people moved to Vancouver Island. The housing stock, meanwhile, only increased by 28,000 units, it said.

Housing affordability and availability are affecting people across age ranges and demographics, said George Hanson, president of the alliance.

Seniors advocate Isobel Mackenzie said only about half of homeowners over 65 live in single-family homes. The other half live in either an apartment, condominiums, townhouses or modular homes.

Mackenzie said the shift into condos makes sense for the elderly because it is often cheaper than owning a home, often requires less maintenance and has fewer or no stairs.

But, with about a third of seniors living on less than minimum wage, she said she's concerned for the elderly renter. She noted a recent trend of long-term renters who have faced eviction, sometimes illegally, because they are living in rent-controlled apartments while the market value has skyrocketed.

“When this happens, (seniors) are in for a catastrophic shock around the new rent they're going to have to pay,” she said. “At the end of the day, they often can't pay the increased rent; they simply don't have the money.”

This report by The Canadian Press was first published April 27, 2022.

This story was produced with the financial assistance of the Meta and Canadian Press News Fellowship.

An RCMP officer who was among 22 people killed in the 2020 Nova Scotia mass shooting is being remembered today during a regimental memorial service in Halifax.