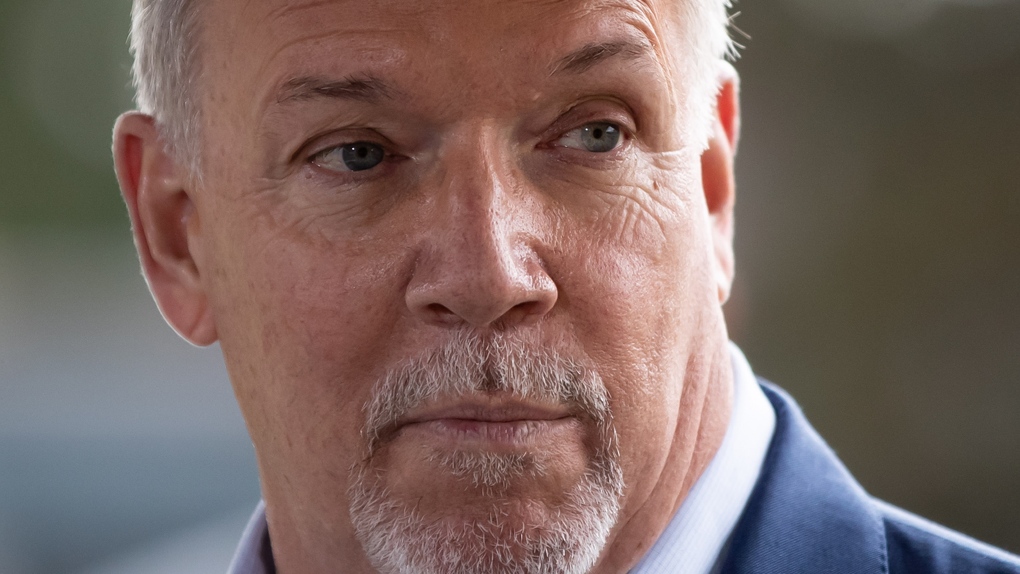 VICTORIA -- An Indigenous leader says John Horgan would often use a joke to ease tensions during difficult times in talks over the future of fish farms between groups with different interests in British Columbia.

Bob Chamberlin says the NDP leader was willing to listen, but he stood firm when he needed to.

“I respected that,” said Chamberlin, a former vice-president of the Union of British Columbia Indian Chiefs who helped develop the joint fish farm policy with industry, Indigenous groups and Horgan's New Democrats when the party was in Opposition and in government.

“It wasn't like he was trying to make friends with myself,” said Chamberlin, who has run unsuccessfully as a candidate for the federal NDP. “I could tell he heard me very clearly. He acknowledged it, but he was also very keen and aware of the responsibilities he would hold.”

In a recent interview, Horgan said he didn't accept responsibility naturally, describing himself as a poor student in high school who would often skip classes to shoot pool or hang out in downtown Victoria. He said he was heading for trouble as a teen before his basketball coach took him aside and warned him to take life more seriously.

“I do my homework now,” Horgan said. “At the time many of my teachers, who are big supporters now, helped me get through despite my best efforts not to get through.”

Horgan's father, Pat, died of a brain aneurysm when Horgan was 18 months old and his mother, Alice, raised four children on her own. Sometimes food hampers were delivered to the home, he said.

Horgan said the struggles of his childhood and a bout with bladder cancer in his 40s helped forge his political goals.

“It all involves bringing people together and what I've tried to do in the 3 1/2 years I've had the opportunity, is to reach out to everyone, business people, not-for-profits, labour, just regular folks, and ask them what they want to see in their government, and I think it's worked,” he said.

Horgan and his wife Ellie have two grown sons, Nate and Evan. Horgan met his wife while they were students at Trent University in Peterborough, Ont.

The 61-year-old politician was acclaimed NDP leader in 2014 following the party's election defeat in 2013 when a 20 percentage point lead evaporated and the campaign ended with a majority B.C. Liberal government.

In 2017, the NDP was able to form a minority government after reaching an agreement with the Green party, which held the balance of power.

Horgan said he struggled with his decision to call the early Oct. 24 election during the COVID-19 pandemic, but he wanted to seek the stability of a majority government and was convinced the election could be held safely. B.C.'s fixed election date was set for October 2021.

He said he would rather be meeting voters on public transit or at hockey rinks, but the pandemic has changed that.

“Although the Zoom calls are great â€¦ I don't get that connect that I would have if I was able to sit down with them and just listen one on one,” Horgan said.

Prof. Kimberly Speers said Horgan has become more at ease as communicator over the years.

“He's always very comfortable in terms of chatting with anyone,” said Speers, who teaches at the University of Victoria's school of public administration. “I think he's even honed that skill even more.”

Horgan's time as premier in a minority government may also have helped his leadership abilities, she said.

“Given that it's a minority government situation, he's had to negotiate and listen, reach consensus on issues during the last three years,” Speers said. “Just in terms of negotiating skills, building consensus, I think he's done a very good job.”

Speers said despite being political opposites, she sees style similarities between Horgan and former populist premier Ralph Klein of Alberta.

“He's relatable, easy to talk to and not condescending,” said Speers, who taught in Alberta.

“If you look across Canada and you look for a government that stood up and made a very clear decision to implement UNDRIP, you'll only find premier Horgan.”

This report by The Canadian Press was first published September 28, 2020.