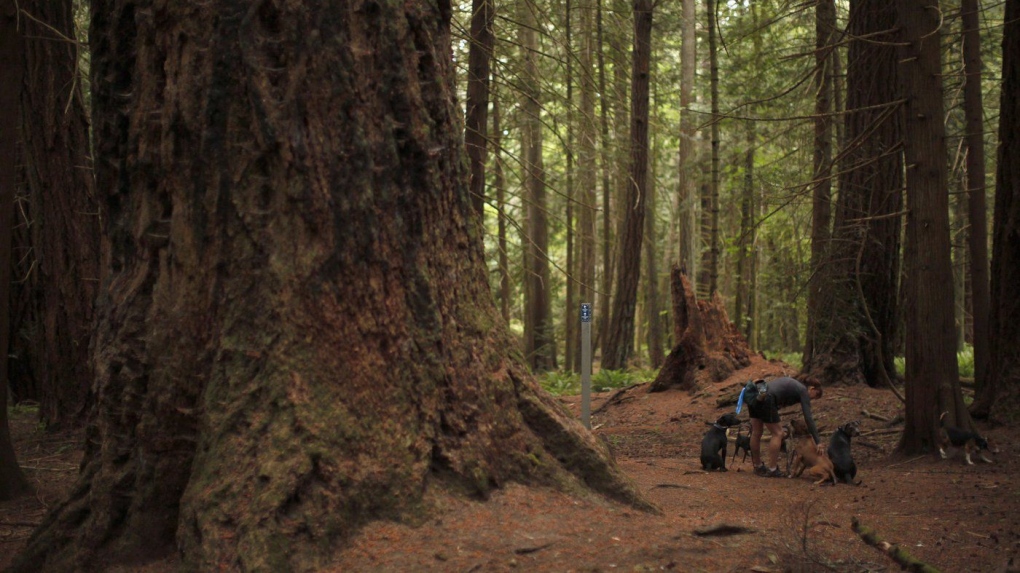 A dog walker next to a Grand Fir tree, (left), at Francis/King Regional Park in Saanich, B.C., on May 26, 2016. British Columbia's forests minister says the province has worked with First Nations to defer almost 1.7 million additional hectares of at-risk old-growth forests. THE CANADIAN PRESS/Chad Hipolito

British Columbia's forests minister says the province has worked with First Nations to defer logging across more than a million hectares of at-risk old-growth forests, an area greater than 4,100 Stanley Parks.

Katrine Conroy says an additional 619,000 hectares of old-growth forests have been deferred at the request of First Nations in order to protect wildlife habitat, at-risk species, healthy salmon populations and cultural practices.

She says more than 80 per cent of old-growth forests identified as being at risk of irreversible loss are not currently threatened by logging, either because they've been deferred, they were already set aside, or they're not economically viable to harvest.

Conroy told a news conference that B.C. will ensure "no one is left behind" as it moves to a more sustainable approach to managing forests, pointing to $185 million announced in the budget to support communities affected by the old-growth deferrals.

B.C. announced last fall that an expert panel had mapped 2.6 million hectares of unprotected old-growth forests at risk of permanent loss, and asked 204 First Nations to decide whether they supported the temporary deferral of logging.

Conroy says the province has now heard from 188 nations, of which 75 have agreed to the two-year deferrals and over 60 First Nations have asked for more time to decide and incorporate Indigenous knowledge into the plans.

In a news release, the province says it is working towards a new old-growth strategy, to be completed next year, following recommendations from an independent old-growth strategic review panel released in fall 2020.

This report by The Canadian Press was first published April 1, 2022.