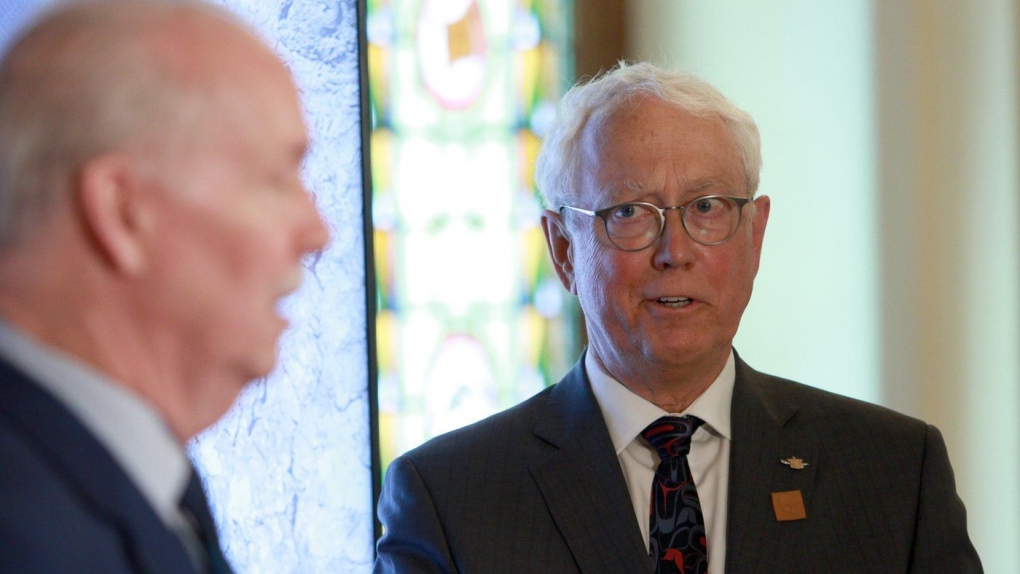 B.C. Attorney General Murray Rankin looks on as Premier John Horgan speaks at the Legislature, in Victoria on March 30, 2022. (THE CANADIAN PRESS/Chad Hipolito)

More arrests are “futile,” British Columbia's attorney general says as he rebuffed criticism of government policies on repeat offenders and violent crime across the province.

Murray Rankin told the legislature on Tuesday that increasing arrests is not the answer to battle crime.

The minister said the New Democrat government is focused on resolving the issue of violent crime, but concentrating only on arresting more people won't work.

“We are committed to ending the cycle of reoffending and keeping people from becoming offenders in the first place,” said Rankin. “Simply arresting people out of the situation we know is going to be futile. We need to do so much more and that is what we're doing.”

He said the government is considering a range of options to keep people safe, including consulting widely with communities, law enforcement officials and mental health and addictions service providers.

Opposition Liberal Leader Kevin Falcon told the legislature the government's ongoing “catch-and-release” policy where repeat offenders are quickly freed from custody despite being accused of violent crimes has created fear for residents in cities from Vancouver to Terrace.

“Criminals emboldened by the lack of enforcement of this government, and four violent random attacks in Vancouver every single day,” he said.

The government's own commissioned prolific offender report released last Saturday cites incidents of violent crime throughout B.C., and frustrations of law enforcement officers arresting alleged criminals only to see them back on the streets.

The report by former Vancouver deputy police chief Doug LePard and Amanda Butler, a criminologist specializing in mental health and addiction, made 28 recommendations.

The report states: “In Terrace, the mayor and a councillor reported, 'The stats don't tell the truth. Crime isn't going down. It's the worst it's ever been. People aren't reporting because there's no point because they're out so fast.”'

Falcon said the government has the power to direct Crown prosecutors to detain more people accused of violent crimes, but it has not taken that measure.

Rankin said he is travelling to Ottawa in the coming days to meet with federal Justice Minister David Lametti to address the crime issue.

This report by The Canadian Press was first published Oct. 4, 2022.

NEW | 'Not looking for a fight' but nothing off the table when it comes to Alberta sovereignty act, PM Trudeau says

Ontario's auditor general says the province wasted 38 per cent of COVID-19 vaccine doses between February and June because it overestimated demand for boosters.