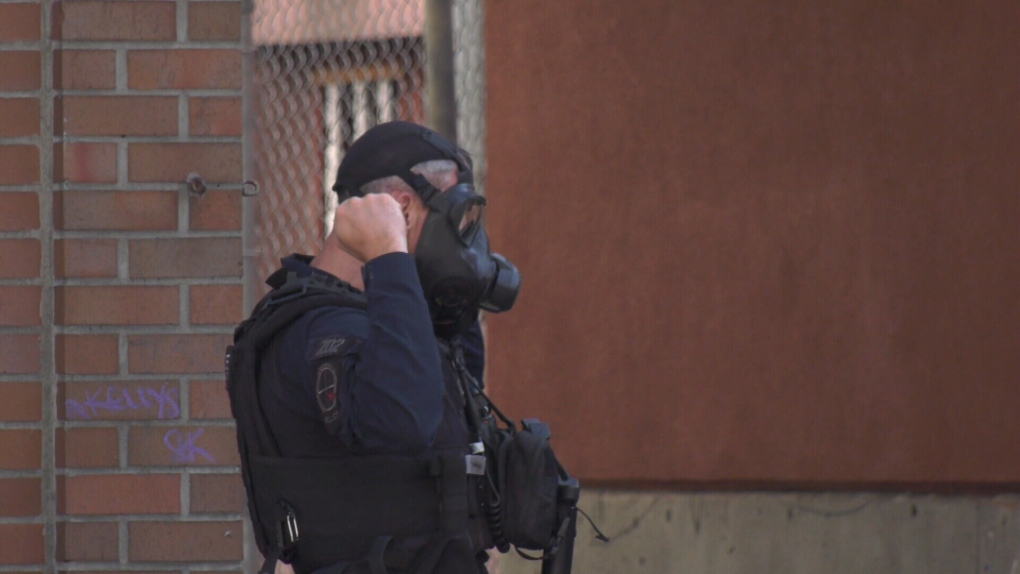 At one point, officers donned gas masks and told reporters and the public to move back as they may use weapons capable of shooting a gas grenade: (CTV News)
Victoria -

A man is in police custody after an incident that shut down a downtown Victoria street and drew heavily armed "emergency response team" officers to the scene.

Patrol officers were called to the 700-block of Pandora Avenue shortly before 1 p.m. to arrest a man who is a suspect in an assault investigation, according to a news release from the Victoria Police Department.

The man refused to be arrested and barricaded himself inside his suite, police said. Neighbours told CTV News Vancouver Island the man was barricaded inside an apartment in the Cool Aid Society's supportive housing building.

Just before 5 p.m., officers taped off a section of Pandora Avenue between Douglas and Blanshard streets. Heavily armed police officers could be seen patrolling the blocked off road.

Officers at the scene could be seen donning gas masks and telling the public to move back as they prepared to use the gas.

Around 6 p.m., police said the situation had resolved and reopened the street to traffic.

Police said the man was taken into custody without further incident and without injury. He is a suspect in an investigation into an assault causing bodily harm and an assault by choking, police said.

Update - this incident has been resolved and Pandora is now open. We'll have additional information about the closure, operation & the investigation that led to it shortly. #yyjtraffic https://t.co/v0zyQ5xMRi

Trudeau vows to 'get back to work,' as Liberals win election but fall short of majority

Liberal Leader Justin Trudeau is vowing to get 'back to work,' after being dealt a second minority government in the 2021 federal election that looks much like the one Canadians elected in 2019.

NDP may hold the balance of power in Parliament

Jagmeet Singh and the New Democrats may hold the balance of power in the next Liberal minority government by playing a key role in helping pass confidence matters and key legislation.

Despite a low number of victories for LGBTQ2S+ candidates in Monday night’s election, advocates say it’s a positive development to see a more diverse and partisan mix of contenders engaging in federal politics.

People on both sides of a fishing dispute in Nova Scotia say the defeat of the fisheries minister in the federal election Monday night is a sign Ottawa needs to solve the problem.

As Canadians are waking up to more of the same after Justin Trudeau managed to hold on to power following Monday's election, international media reacted to the prime minister's 'gamble.'

OPINION | Tom Mulcair: Voters sent a chastened Trudeau back to his job with a stern warning

All of Canada has just repeated a message sent loud and clear to Justin Trudeau two years ago: 'we don’t trust you with a majority,' writes former NDP leader Tom Mulcair in an exclusive column for CTVNews.ca.