Another 'bomb cyclone' bears down on Vancouver Island 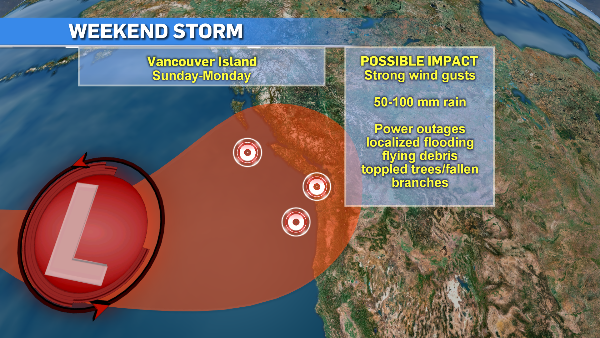 The storm will be another bomb cyclone but stronger than the one we just dealt with on Thursday. (CTV News)
Victoria -

Are you ready for another “Big Blow?"

To help you with your answer we have to travel back to Oct. 12, 1962. That date has been referenced a lot this past week on social media as we prepare for a possible record-breaking low-pressure system for the Pacific Northwest.

The Big Blow, or as it’s known to our American friends, the Columbus Day Storm of 1962, was originally Typhoon Freda. When it hit the West Coast it had a massive impact.

The storm was one of the most powerful extratropical cyclones ever recorded. The winds associated with this storm were in excess of 230 km/h at its peak.

While the storm did weaken as it moved north into British Columbia, the peak wind gusts were still 140 km/h, caused $80 million dollars in damage and killed five people.

The lowest pressure recorded during the Big Blow was 960-958 hPa or millibars of pressure. The storm we’re waiting for on Sunday could potentially have pressure as low as 944 hPa, according to some models.

It will be another bomb cyclone but stronger than the one we just dealt with on Thursday.

There are a few factors helping to make this system a monster. We’re being fed lots of energy from the Bering Sea, which is typical.

The huge amount of subtropical moisture and a fast moving polar jetstream, rolling at approximately 400 km/h, along with some strong troughing near Vancouver Island are all combining to make this a possible record-breaking bomb cyclone. 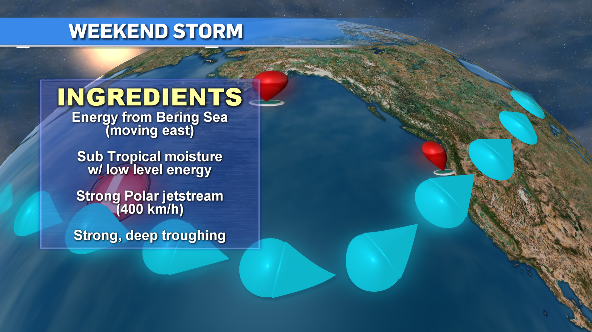 The problem this system is currently presents is not only how low that pressure will go but the path of where this storm is heading.

As the storm hits land, it will weaken but the location of the most intense features are still up in the air, literally.

There’s a good chance it moves in south of Vancouver Island and impacts Washington state more than us but we could also see a shift north where the west coast and northern areas of the island are the most impacted.

Sunday though Monday morning will be the timeframe we’re dealing with this next big storm. We still have to wait it out when it comes to the finer details as things change quickly.

No matter where it lands, wind will be the biggest factor with rain being less of a concern.

Don’t get me wrong, a good amount of rain will fall but here on the island our numbers won’t match what they’ll see in Northern California, with a possible 300 millimetres hitting the area, which in turn could create massive flooding and mudslides.

Rainfall numbers through the weekend are in the 50- to 100-millimetre range on Vancouver Island and if we take Thursday’s storm as a template, wind gusts will hit the triple digits in a few areas.

The west coast and northern areas will receive the stronger gusts. Expect huge waves on the coast as well. Those will start to swell early Sunday.

While we won’t see the destruction of the Big Blow, we still need to brace ourselves for an intense weekend of angry weather. It’s always best with these situations to prepare for the worst and hope for the best.