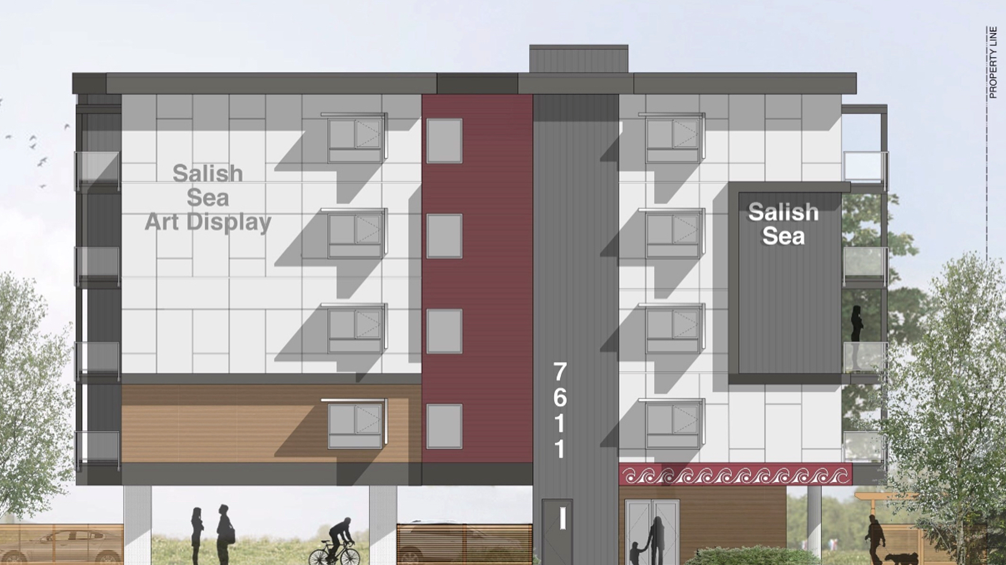 Work will soon be underway on a new five-storey housing development for Indigenous people on land owned by the Tsawout First Nation.

The development to provide 28 affordable rental units for working Indigenous people is made possible by a partnership between the Tsawout First Nation, Salish Sea Housing Society and BC Housing.

The homes are being built on an almost-one-acre parcel of land owned by the Tsawout First Nation on Central Saanich Road.

“There’s a lot of job opportunities for the people who are going to be living on this site and it’s a great opportunity to for them to be nearby home,” said Tsawout First Nation Chief Harvey Underwood. “I think it’s paramount that it be built and our people have a sense of pride and prestige in their lives and have a comfortable place to call home.”

The project will be constructed on a vacant piece of Tsawout property in Central Saanich that up until a few years ago was used to store RVs and boats.

The building is designed to meet the needs of Indigenous families in the workforce. Three of the development’s 28 below-market rental suites will have three bedrooms, as will the building’s one fully accessible suite. The remaining 24 units will have two bedrooms.

Each of the units will also use energy-efficient lighting fixtures and heating systems that Chief Underwood says fits with the values of the First Nation.

Tsawout First Nation Councillor Mavis Underwood says the development will provide a solution to the housing needs of Tsawout people who have been unable to find affordable and appropriate housing in Greater Victoria.

“We have a large demographic of young adults starting out with families,” said Councillor Underwood. “We have two-thirds of our population (who) are young adults with children who need housing.”

Councillor Underwood says having the development within the context of the community and culture of the Tsawout First Nation allows the building’s residents to have the support of the First Nation at their doorstep.

“It keeps them in the shelter of their community,” said Councillor Underwood. “Having a place to call your own and to have pride in is empowering and I see this as a very empowering thing that you can be in the heart of your community with your family around you.”

In a news release, the province says the project will also include a communal space for gathering. reflecting a desire for community among the building’s future residents.

The project is funded by a $5.6 million grant from the province’s Building BC Indigenous Housing Fund. The government will also provide $425,894.00 in annual operating subsidies for the development for the next 25 years.

Once completed, the 28-suite building will be managed by the Salish Sea Housing Society.

Each of the units will include a dishwasher and hookups for washing machines and clothes dryers. The building will also include internet access, covered parking and storage for bicycles.

Rents have yet to be confirmed, but will be assessed at rates well below market rents in Greater Victoria closer to the time of the project’s completion. Rent for a two-bedroom suite is expected to be in the range of $655 a month. The three-bedroom units will rent for around $750.

“I look at the rents that are being described and I go, ‘Wow, I could afford that rent,’” said Councillor Underwood. “When I’m working, its not going to be just about rent, or I can’t afford food. I can afford a reasonable living, particularly if you’ve got young kids, you need to be able to feed them and just not pay rent.”

The housing development is expected to be completed and ready welcome its first tenants in spring 2023.