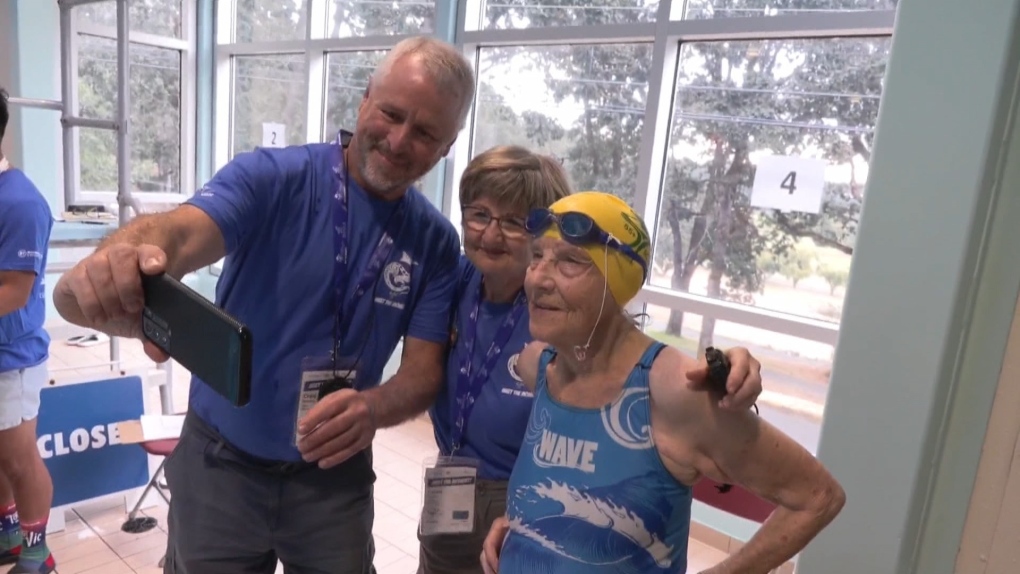 Betty Brussel would never have imagined that — at 98 years old — people would ask to pose with her poolside.

“I grew up in the '30s,” Betty says. “There was no money for lessons or pools or anything.”

And then the Second World War made her family’s humble home in Holland seem almost uninhabitable.

“We didn’t have bathrooms or showers,” she says. “Can you image being without electricity for three years?”

Although she and her 10 siblings would sometimes have to beg for food, Betty says there was always an abundance of love.

“Love is very important,” she says.

Love of family inspired Betty and her husband Gerrit to have three children of their own, before following her siblings and emigrating to Canada.

“[This] is the best place in the world to live,” Betty smiles. “I love it here.”

Here is where — when Betty was 68 — she decided to start swimming.

“I could only do the breast-stroke,” Betty says. “And I didn’t do it right.”

But the swim club she joined with her husband didn’t take themselves too seriously.

“We had so much fun,” Betty smiles, looking through photos of them dressed in creative costumes.

And along the way, Betty got so much better at swimming that she was invited to begin competing.

“I like to win,” she says, before adding she has a bag full of medals that’s too heavy for her to pick-up.

“But it’s not important.”

Although she doesn’t recall the exact number of gold medals she’s won, or know how many provincial, national, or world records she’s earned (there’s been a lot), Betty will never forget look on her husband’s face during their final years together.

“He slowly faded away,” Betty says, smiling at a photo of him.

“But if I would come home with all the medals, he would be so proud of me.”

Despite losing Gerrit after almost 65 years of marriage, despite suffering from a heart attack, broken bones, and a torn shoulder, Betty kept returning to the pool.

“The pool is absolutely my happy place,” Betty smiles, shortly before diving into the pool to compete in the first of seven contests at the 55+ BC Games.

This pool is where — for the past 30 years — Betty’s provided inspiration for her competition.

“No matter how old you are,” Betty says. “You’re never too old to learn."

In a couple years, the pool is where the now 98-year-old plans to be celebrating a century of living, and striving for the hardware in the 100-plus category of swimming competitions.

“I just love to live,” Betty beams. “I live every day and I enjoy every day!”

Bank of Canada raises key interest rate to 4.25 per cent, its highest since 2008

There have never been so many renters in Canada, RBC report says

Royal Bank of Canada economists say the country has reached a record number of renters as the number of people renting has increased at three times the rate of homeowners in the past decade.

Scientists discovered the oldest known DNA and used it to reveal what life was like 2 million years ago in the northern tip of Greenland.

Putin calls nuclear weapons a tool of deterrence in Ukraine

Russian President Vladimir Putin on Wednesday hailed the annexation of Ukrainian territories as a major achievement and said his country's nuclear weapons serve as a tool of deterrence in the war that the Kremlin calls a 'special military operation.'

Time Magazine on Wednesday named Ukrainian President Volodymyr Zelenskyy its person of the year, awarding him the accolade 'for proving that courage can be as contagious as fear.'