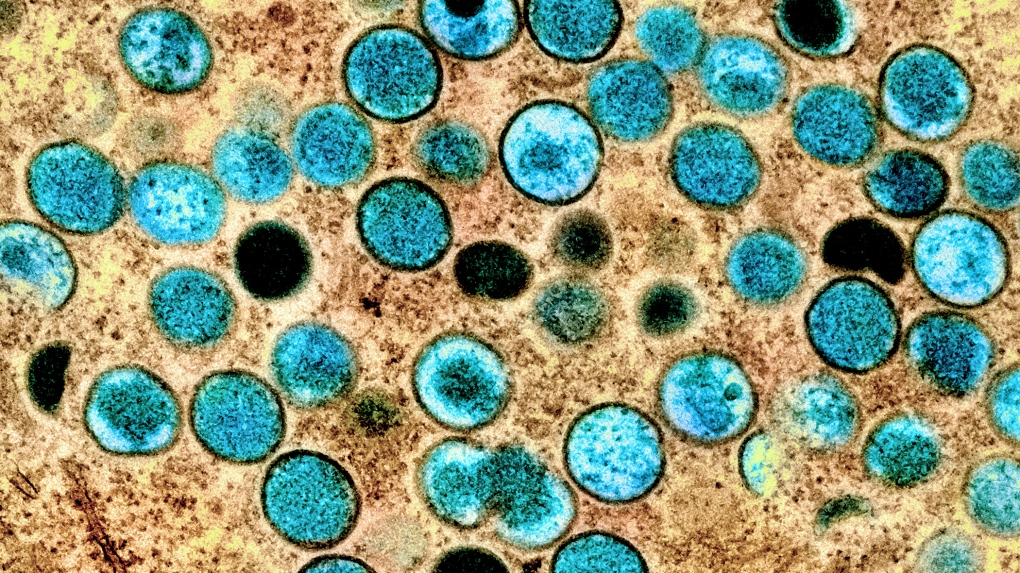 A colourized transmission electron micrograph of monkeypox particles (teal) found within an infected cell (brown), is shown in a handout photo captured at the NIAID Integrated Research Facility (IRF) in Fort Detrick, Maryland. THE CANADIAN PRESS/HO-National Institute of Allergy and Infectious Diseases.

There are now four confirmed cases of monkeypox in the Island Health region, the health authority confirmed Thursday.

The first case was confirmed on July 7, and Thursday was the first update from the health authority since then.

Across B.C., 61 cases of monkeypox have been confirmed, according to the B.C. Centre for Disease Control.

In mid-July, Island Health launched its vaccination campaign against the illness.

"It's a targeted campaign for those at high risk of being exposed to monkeypox," said Island Health medical health officer Dr. Mike Benusic on Thursday.

The health authority says it's trying to be informative and sensitive in its vaccine efforts, with people who identify as being gay, bisexual or men who have sex with men being at highest risk for infection.

Details about vaccine eligibility, and monkeypox symptoms, can be found on the Island Health website.

"We have vaccines available in Victoria, Nanaimo and in Courtenay and so far we've administered about 500 doses," said Benusic.

A global uptick in monkeypox cases began appearing in May, with Canada seeing 745 confirmed cases as of Wednesday.

Monkeypox is a viral illness that has many symptoms similar to a flu. It is spread through close personal contact with someone who is symptomatic.

The Swedish national seismic network says it detected two explosions close to unusual leaks on two Russian natural gas pipelines running under Baltic Sea to Germany. It registered one blast early Monday southeast of the Danish island of Bornholm and a slightly larger one later that night northeast of the island.

Canadian employers project the national average base salary to increase by 4.2 per cent next year, a new survey says.

Most P.E.I. residents without power two days after Fiona

An American who returned to U.S. soil last week after being held by Russian-backed forces for more than three months said Monday that it's "surreal" to be back home.

Watch the moment NASA rammed a spacecraft into an asteroid

A high-speed NASA spacecraft veered toward an asteroid on Monday – and rammed into the rock deliberately.