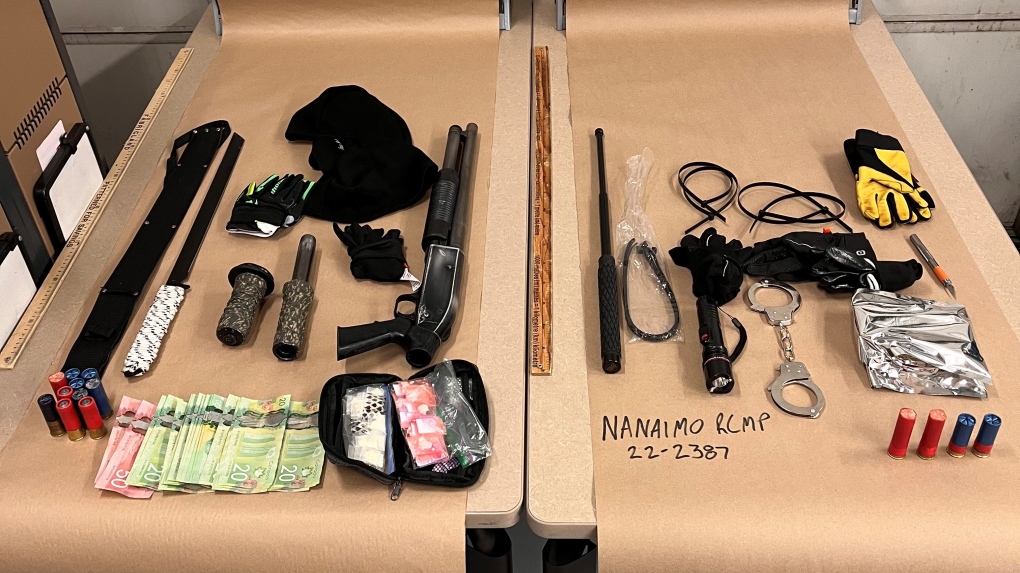 Some of the items seized from the vehicle are shown: (Nanaimo RCMP)

Nanaimo RCMP say three people were arrested on Saturday after a slew of weapons was found inside their vehicle.

The arrests occurred near the intersection of Bowen Road and Meredith Road in the early hours of Jan. 22.

Mounties were on patrol when they spotted the vehicle, an older model Ford Focus, which did not have valid insurance.

Police approached the vehicle and found three people inside, as well as loaded firearms and an improvised explosive device.

Mounties say there was a loaded 12-gauge shotgun, an improvised 12-gauge "zip-gun" that was also loaded, a prohibited stun-gun flashlight – and other items, such as a stolen insurance decal, drugs, and several hundred dollars in cash in the vehicle.

Police say the explosive was brought to a nearby field, under recommendation by the RCMP explosives disposal unit (EDU), until the EDU could arrive and safely destroy it.

Two people from Nanaimo, a 23-year-old man and 28-year-old woman, were arrested at the scene as well as a 31-year-old man from Vernon, B.C.

The investigation is ongoing and police are still reviewing potential charges.

"This is an excellent example of General Duty Officers in Nanaimo conducting a thorough investigation of a suspicious vehicle that went from a straight forward charge under the Motor Vehicle Act charge for no insurance, to apprehending three persons and getting several extremely dangerous weapons off the streets," said Const. Gary O'Brien of the Nanaimo RCMP in a release Wednesday.

Eleven newborn babies have died after a fire that broke out in the neonatal department at the Mame Abdou Aziz Sy Dabakh Hospital in the western Senegalese city of Tivaouane, said the country's president Macky Sall on Thursday.

Canada is committing an extra $1 million to help the international community investigate sex crimes by Russian troops in Ukraine. Foreign Affairs Minister Mélanie Joly said Canada would give the extra funds to the International Criminal Court to help it investigate sexual violence toward women, and also crimes against children.