RCMP say they're working with the BC Coroners Service to identify the two men who were shot and killed by police in an exchange of gunfire outside a bank in Saanich, B.C., on Tuesday.

The shootout also resulted in six police officers being injured, three of whom remain in hospital Thursday.

Once the two suspects have been identified, police say they'll notify their next of kin.

"Then we will be moving forward with determining more about them," said RCMP Cpl. Alex Bérubé at a live update outside of the Saanich Police headquarters Thursday.

"I mean their backgrounds, who they are, their histories, and how that may relate to what took place," he said.

Saanich Police Chief Const. Dean Duthie was able to clarify, however, that officers encountered the two armed men as they were exiting the bank Tuesday.

He added that a white panel van parked at the scene, which is now riddled with bullet holes, was a police vehicle.

Meanwhile, Bérubé was able to describe what the suspects' vehicle looked like, and confirm that "improvised explosive devices" were found inside it.

"It's fair to describe what [the explosive disposal unit] dealt with was a highly volatile and dangerous situation," he said.

The suspects' vehicle is described as a white, four-door 1992 Toyota Camry with two black racing stripes over its hood and roof.

"We're asking anyone with information about this vehicle or its movement a week prior to Tuesday to contact the VIIMCU line at 250-380-6211," said Bérubé. 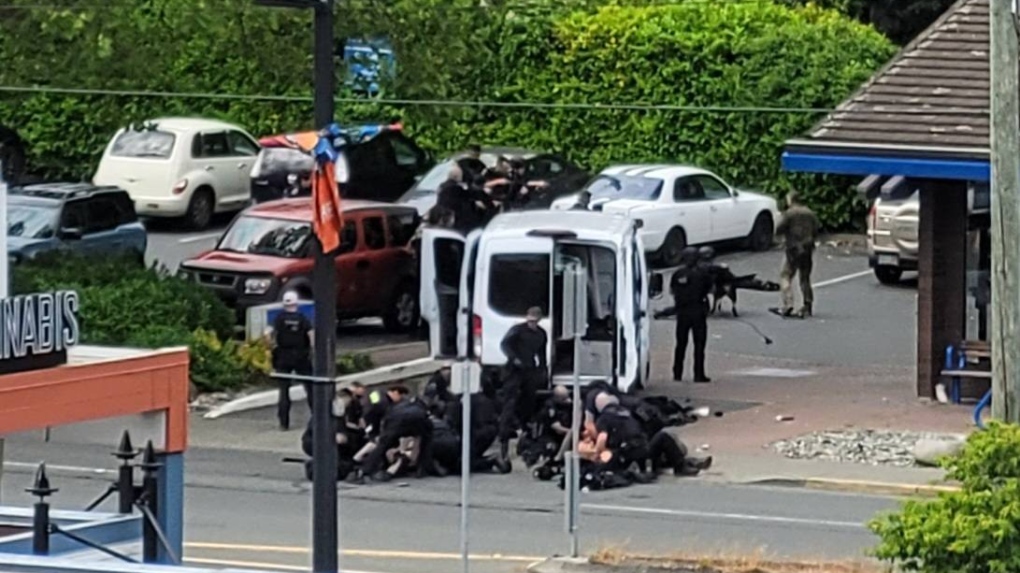 Bérubé says several firearms located at the scene have also been recovered by police.

The RCMP officer said he was unable to provide specifics on the firearms, however, due to the concurrent investigations by VIIMCU and the provincial police watchdog group, the Independent Investigations Office of B.C.

"I can say that multiple units and personnel that specialize in dealing with and identifying firearms are involved," he said.

'I CAN ONLY IMAGINE'

Saanich's police chief once again thanked first responders, as well as staff with E-Comm, the organization responsible for answering almost all 911 calls received in B.C.

"This dedicated, committed and professional team managed the 911 emergency calls that came in for this event," said Duthie.

"You and I can only imagine the nature of incoming calls, the terror and emotion that is weaved throughout these calls," he said, adding that dispatchers were invaluable with helping direct and respond to officers in the field.

Duthie also expressed his sympathies for the staff and customers who were inside the Bank of Montreal when the incident occurred. 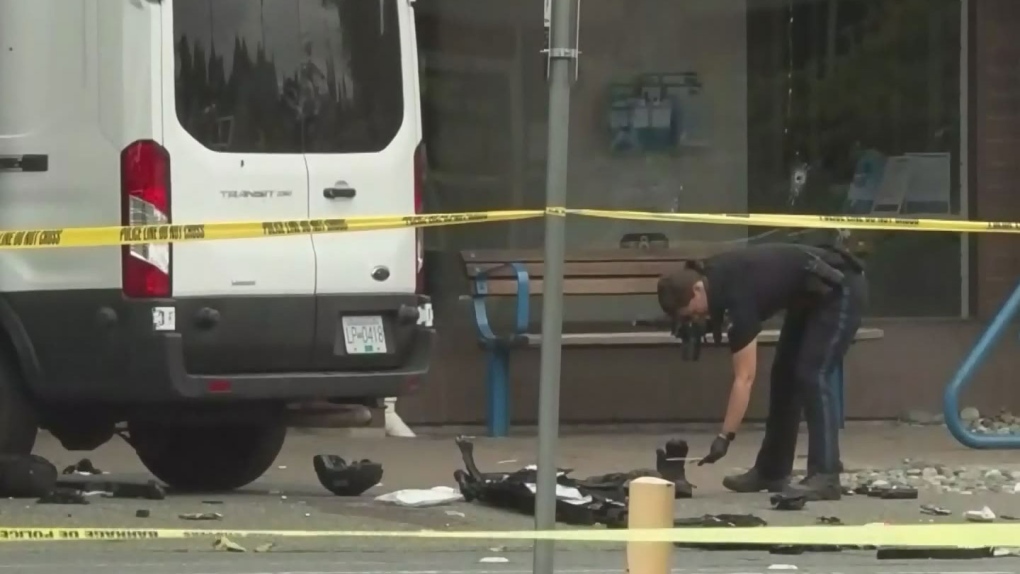 "They experienced an incident that will likely never be forgotten and [will] likely often replay in their minds over and over again," he said.

"To all BMO staff and all BMO customers that day, please know that the Saanich Police Department is thinking about you from our hearts and we hope you have the supports you need to process what you've experienced and move forward in a healthy way."

The police chief also expressed gratitude for nearby residents and businesses that were evacuated Tuesday, some of whom have not been able to return to their homes or reopen their stores two days later, as police process the scene.

"I know that your lives have been significantly disrupted with road closures and 24-hour scene security," he said. "Your understanding, patience and support is greatly appreciated."

A two-year-old child from Regina has been found safe, following an alleged abduction and Amber Alert.

The rapid growth of a long-burning forest fire in central Newfoundland has triggered a state of emergency in the area and the expansion of an outdoor fire ban to the entire province.

Summer of heat waves: A list of some temperature records broken in Canada this year

Canada's summer of heat waves continues this weekend, with warnings issued in four provinces. CTVNews.ca looks at some of the heat records broken already this year in Canada.

How Biden's new approach has led to legacy-defining wins

Over five decades in Washington, Joe Biden knew that the way to influence was to be in the room where it happens. But in the second year of his presidency, some of Biden's most striking, legacy-defining legislative victories came about by staying out of it.

Montreal's Pride Parade has been cancelled due to a lack of volunteers able to guarantee a secure event.

Ukrainian President Volodymyr Zelenskyy said on Sunday that if Russia proceeded with referendums in occupied areas of his country on joining Russia, there could be no talks with Ukraine or its international allies.

A ceasefire between Israel and Palestinian militants took effect late Sunday in a bid to end nearly three days of violence that killed dozens of Palestinians and disrupted the lives of hundreds of thousands of Israelis.