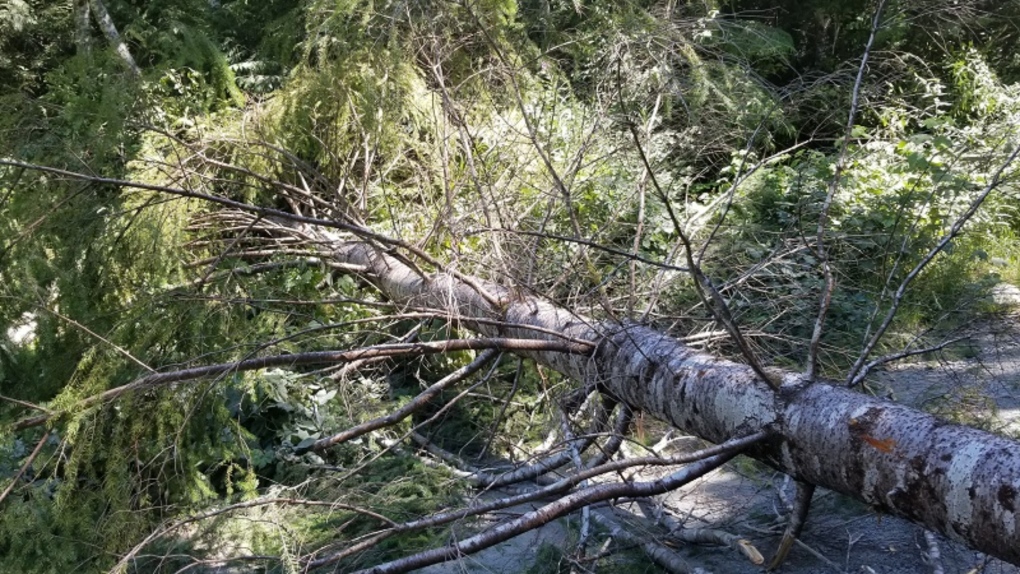 Police accused protesters of cutting down 18 living trees and laying them across the logging road leading into the watershed. (BC RCMP)
Vancouver -

Mounties enforcing the B.C. Supreme Court injunction against anti-logging protesters in the Fairy Creek Watershed on Vancouver Island say they arrested 16 people on Saturday, after escorting them to a picnic in the blockaded area.

Police have now arrested nearly 500 people since they began enforcing the injunction in May, according to a news release issued by BC RCMP on Saturday evening.

According to police, Saturday's arrests happened after the RCMP's "Division Liaison Team" escorted a group of people, some of them elderly, to a picnic at Avatar Grove in the contested watershed.

Officers also escorted the picnickers out of the area after the event, police said.

"Most of the members of this group were cooperative and peaceful," Mounties said in their release. "However, some were confrontational with police, resulting in the arrest of a total of 16 individuals."

Fifteen of the arrests were for obstruction, while the 16th was for civil contempt of court for breaching the injunction, police said, adding that another person is "actively being pursued for assaulting a police officer."

Everyone who was arrested Saturday was taken to Port Renfrew for processing and then released, police said.

In Saturday's news release, police accused protesters of cutting down 18 living trees and laying them across the logging road leading into the watershed.

Mounties also shared a photo of a person allegedly smoking a cigarette while at the top of "a tripod structure" and "surrounded by the dry and tinder forest."

Chief Supt. John Brewer, the Gold Commander of the RCMP Community-Industry Response Group, said he is "gravely concerned" by the protesters' tactics.

“On top of their escalating level of violence, they are now committing these egregious safety violations by falling healthy living trees and digging trenches on the roads," Brewer said in the release. "It’s only a matter of time before someone, whether a fellow protester, supporter or police officer is seriously injured.”

Police said they have raised these concerns with one of the leaders of the protests. They also noted the large number of wildfires currently burning in B.C. and warned protesters of the dangers a wildfire in the Fairy Creek area could pose.

"The remote location will be extremely difficult to reach should fire suppression efforts and evacuation be required," police said.