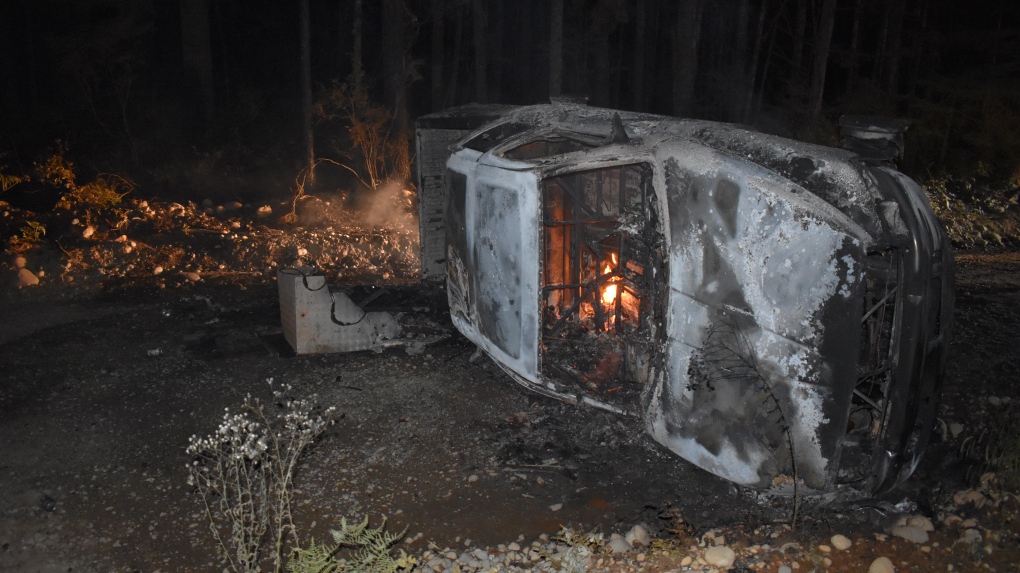 A passenger in the vehicle suffered non-life-threatening injuries and was taken to Campbell River Hospital for treatment. (RCMP)
Victoria -

Mounties in Campbell River battled their third vehicle fire on a logging road in as many weeks Sunday.

By the time officers arrived on scene, the forest around the truck was also burning, the RCMP said in a release Friday.

The officers used fire extinguishers to knock down some of the blaze while fire volunteers arrived with a fire blanket.

Police say the driver of the truck, which had flipped on its side before catching fire, went to get a water truck from a forest service company.

Nearby campers also arrived to help police tend the water truck's hose and extinguish most of the fire.

A passenger in the vehicle suffered non-life-threatening injuries and was taken to Campbell River Hospital for treatment.

Provincial wildfire fighters mopped up the remnants of the blaze and the wrecked truck has hauled away.

Mounties say it was the third vehicle fire on a forest service road in three weeks in the Campbell River area.

Researchers from Rutgers University in New Jersey say smartphone sensor data combined with machine learning could detect whether someone is under the influence of cannabis.

Lines of mourners paid their respects Sunday for Gabby Petito, the 22-year-old whose death on a cross-country trip has sparked a manhunt for her boyfriend.

As Canada prepares to recognize the first National Day for Truth and Reconciliation Thursday, the desire to hear from residential school survivors has soared across the country.