1 escaped African cat captured, another still on the loose in Qualicum Beach, B.C.

1 escaped African cat captured, another still on the loose in Qualicum Beach, B.C.

The owners of a pair of African servals allege someone intentionally let the exotic animals loose out of a pen in their Qualicum Beach backyard Sunday. One of the animals is now back in their care, and they're hoping the other one returns.

Edwards says he and his girlfriend first became aware that their two cats – a male named Tumaz and a female named Luna – had disappeared on Sunday when they heard a commotion across the road from their rural property. It appears one or both of the servals was involved in the killing of a neighbour’s domestic cat.

Laurel Bablitz is Edwards’ girlfriend. She says the couple is remorseful about what happened.

“I sent (the cat’s owner) a message and said, 'You know, I am so sorry for your loss, we’re cat people and I can’t even imagine your grief,'” Bablitz says.

Edwards was able to recapture the male serval, but the female – believed to be pregnant – remains on the loose. 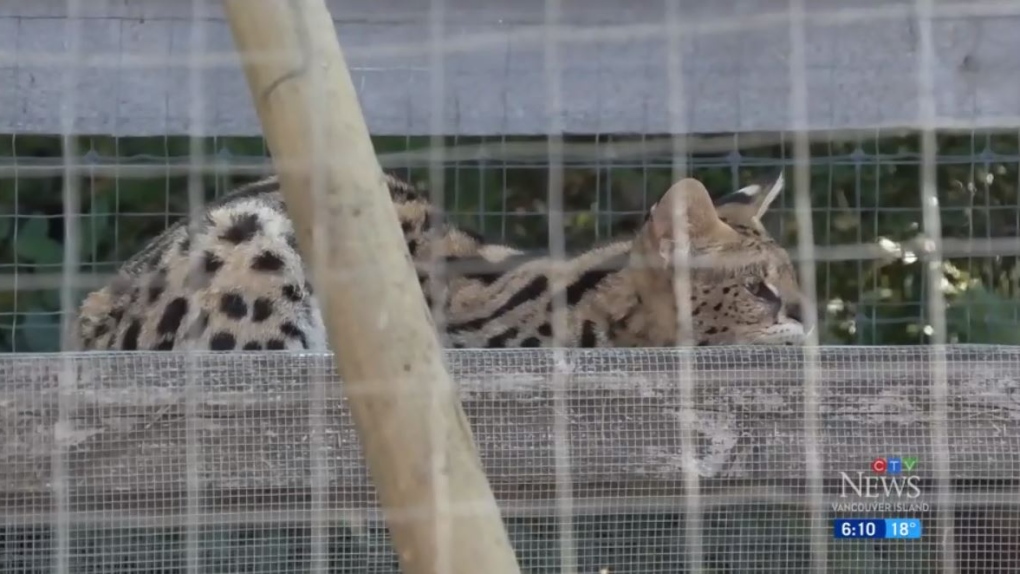 The couple have only owned the animals for about six or seven weeks, after purchasing them from the Metchosin area from a woman who was looking at using the cats in a breeding program.

Bablitz says the cats had been outside in their pen up until someone released them, likely while the couple were asleep.

“You have to really work at it because it’s not easy to open. It was not left open. It was an early morning release,” she says.

Bablitz went onto the Meadowood Facebook group to inform people the cats were on the loose and to watch their animals and their children. She realizes the way she worded her notice likely worried people.

“I don’t think they would attack a child because they know what people are, but animals are game, they’re food as far as (the cats are) concerned, so I wanted people to know,” she says.

Bablitz says she doesn’t know the cats’ history, so isn’t aware of how they would react to children if approached.

The B.C. Conservation Officers Service (BCCOS) confirmed the servals were on the loose and the BC SPCA said that a domestic cat had been killed.

The BCCOS says it provided the owner with advice on what to do and referred them to local animal control and the BC SPCA, since African servals are technically considered domestic pets and not wildlife, therefore falling outside the purview of the BCCOS.

Owning the exotic cats as pets is controversial, however. The BC SPCA says servals "are difficult to contain in a home or enclosure setting" and that they're not easily house-trained.

"These wild cats are not much bigger than a medium-sized dog, but they still retain their wild instincts and are cunning escape artists," reads the BC SPCA's information page on the animal.

Leanne Salter is the regional district representative for the area as well as someone with years of experience trapping animals on her property. On Wednesday, she began assisting the couple by setting out traps for Luna. She says she was inundated with emails from people concerned about the loose animal.

Salter’s arsenal includes a cage that was custom made for her.

“I had it made for me by a welder in Coombs and it was based on a bear trap, so I just gave him the dimensions and what it looked like and he built it. He did a really good job too,” she says.

Salter says she has learned a great deal about animal capturing techniques over the years.

“These servals are quite large – they’re the size of a small dog – and they’re wiley. They’re a wild animal for all intents and, you know, your own cat, if your cat doesn’t want to come home, it’s not coming home,” she says.

She says she also shares concerns about the cat in the wild.

“Somebody didn’t realize what they were touching there, I’m sure, because it is a danger to have this animal loose up here, (a) danger to itself and a danger to other people and their pets,” Salter says.

African servals do not fall under B.C.’s controlled alien species regulations and can be owned in the province as pets.

Bablitz knows many don’t find that acceptable, but says setting the cats loose isn’t the solution.

Grant Wahl, one of the most well-known soccer writers in the United States, died early Saturday while covering the World Cup match between Argentina and the Netherlands.

Phase 1 of Canada's single-use plastics ban comes into effect this month. These are the products on the list

Canada's ban on single-use plastics, starting with the manufacture and import for sale of a number of products, comes into effect later this month.

The search for a Washington state woman whose husband couldn't find her after spotting a shark while they were snorkeling in Hawaii was called off Friday.

Google's top trends: What did Canadians search for in 2022?

As we approach the new year, Google is providing a glimpse at what 2022 looked like for Canadians, based on the most popular search terms entered on the site.

'I will not be resigning': Winnipeg police chief supportive of determining if landfill search is possible

Amid calls for his resignation, Winnipeg's police chief says he will not be stepping down and is committed to getting justice for the four victims of an alleged serial killer.

The federal government has approved a change in how the cannabis content of beverages is calculated, pushing the number of standard-sized, canned pot drinks that can be bought at once from five to 48.

Here's what Gen Z wants in 2023, according to Instagram

Instagram has published a new report highlighting the top rising trends for the coming year among Gen Z users across the platform.

Oldest known pair of jeans in the world pulled from shipwreck, sold at auction

Pulled from a sunken trunk at an 1857 shipwreck off the coast of North Carolina, work pants that auction officials describe as the oldest known pair of jeans in the world have sold for US$114,000.