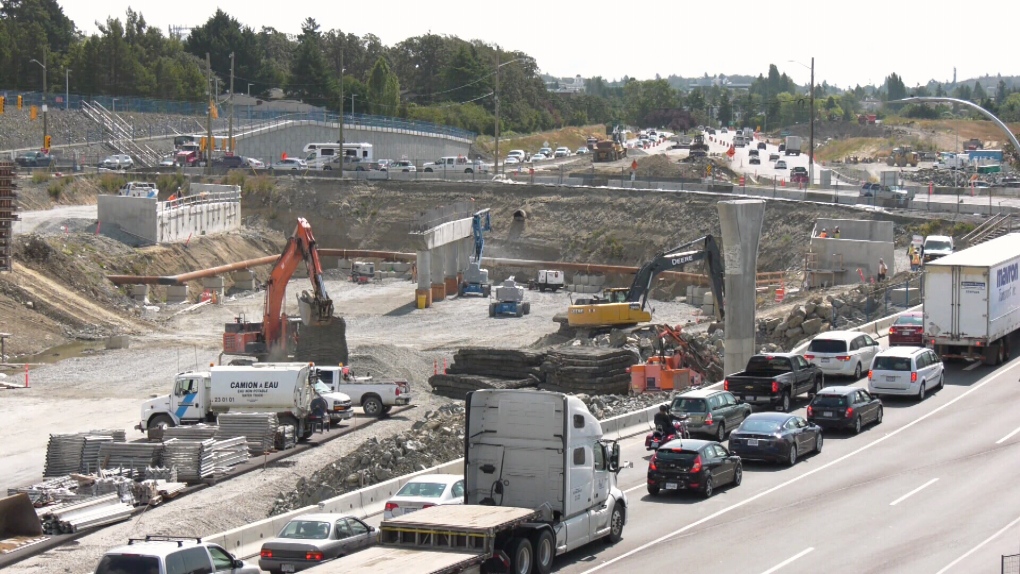 The McKenzie Interchange Project is expected to be complete by next summer. (CTV Vancouver Island)

Not-on-time and over-budget is the last bit of news we heard from the ongoing McKenzie Interchange Project. But this weekend some real progress should be evident.

People can expect to see some major changes to the project’s landscape as the precast concrete box beams for the future Highway 1 underpass are lifted into place.

On Saturday and Sunday, two spans will be erected, each consisting of 15 concrete beams. With each concrete beam weighing between 52 and 62 tonnes, two cranes have been brought in to do the work.

Once the beams are in place, crews will begin work on the bridge deck and approaches to connect McKenzie Avenue with Admirals Road.

As soon as that connection in complete, traffic east and west will be moved onto the new bridge, allowing crews to finish the excavation work to remove the current McKenzie and Admirals connection.

This work will allow for the continued paving of the north- and southbound lanes of the Trans-Canada Highway.

The Ministry of Transportation and Infrastructure says no additional lane closures will be necessary, however motorists can expect the usual delays associated with the project.

Following the work, the ministry anticipates removal of the traffic lights on Highway 1 at McKenzie Avenue by the winter.

The entire project was initially slated for completion by late 2018 but that timeline has now been pushed back to next summer.

Once complete, the construction is estimated to save commuters travelling from downtown to the western communities about 20 minutes travel time.